By Carol Shaughnessy|2022-05-03T10:47:05-04:00March 30, 2022|
Some Key West canines, like the handsome Bailey shown at the island’s Southernmost Point marker, happily ride around town in bicycle baskets — earning the tongue-in-cheek designation of “basket hounds.” (Photo by Alyson Crean)

Lately new friends from the “real world” (loosely defined as everywhere outside Key West) have been asking me what the island city is REALLY like. After all, it’s been my beloved home for several decades, so they figure I must know. 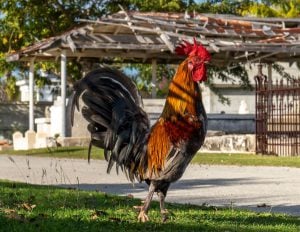 Key West’s local poultry population, like this majestic rooster, is a colorful, quirky part of the island’s unique vibe. Some years back, the wandering fowl even inspired their own feathered festival. (Photo by Rob O’Neal)

The first thing I tell them is simple: Key West is not normal.

In a normal city, locals don’t head for the nearest laundromat when they crave a great sandwich. They don’t drive around in cars painted like flamingoes or mobile coral reefs. They don’t wear tutus to lunch.

In fact, Key West is gloriously, outrageously abnormal — a place where wild chickens roam the streets and dogs are favored customers at more than one bar. A place where nobody thinks it’s strange to spot grown men dressed like Darth Vader or Marilyn Monroe (FYI, it’s possible to encounter them both on the same evening).

What else should visitors know about the island city?

BASKET HOUNDS ABOUND. Bicycles and scooters are favored modes of transportation through the streets of Old Town. And why not? Summer or winter, the breeze is likely to carry the spicy scent of seaweed, saltwater and frangipani blossoms — something that can’t be enjoyed from a closed car. It’s not unusual to see a bicyclist pedal by with a parrot on his or her shoulder, or a dog in the bike basket. These are called basket hounds — a breed believed to be indigenous to Key West. 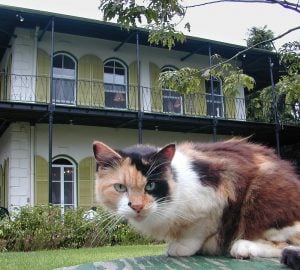 Ernest Hemingway lived and wrote in Key West for most of the 1930s, and descendants of his six-toed cats still live on the grounds of the Ernest Hemingway Home & Museum there. (Photo by Andy Newman, Florida Keys News Bureau)

CREATIVITY RULES. Key West’s creative heritage is a definite part of its charm. Known as a haven and inspiration for writers since Ernest Hemingway’s nearly 10-year residence in the 1930s, the island is home to scores of renowned authors — including several Pulitzer Prize winners. An annual literary seminar, yearly celebrations saluting Hemingway and Tennessee Williams, writers’ groups and a couple of world-class local bookstores all testify to the island’s affection for authors.

NO PANTYHOSE. Though parts of Key West resemble a New England fishing village, with its gingerbread-trimmed Victorian houses and tidy picket fences, the laid-back atmosphere bespeaks its Caribbean roots. Local business owners rarely wear socks on the island — let alone ties — and some don’t even wear shoes. The typical female resident shudders at the thought of struggling into pantyhose.

PEOPLE GET ALONG. Key West has a warm, welcoming atmosphere that probably stems from its patchwork heritage. Early settlers included Cuban cigarmakers, New England shipbuilders, Bahamian salvagers and fishermen, Navy personnel, southern merchants and likely even a few wandering pirates. The current population ranges from recovering hippies and people fleeing the “real world” (see above) to émigrés from virtually all over the world. Despite their outward differences, they generally get along just fine. 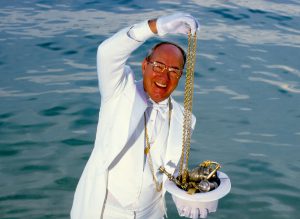 Legendary shipwreck salvager Mel Fisher displays treasures and artifacts from his undersea discoveries in the waters off Key West. Even after his death, Mel’s legacy continues to grow. (Photo courtesy of Mel Fisher’s Treasures)

THE WORLD’S LONGEST STREET. Many of the most interesting art galleries, shops and restaurants are located on Duval Street, Key West’s fabled main street. Duval has been called “the longest street in the world” because it stretches from the Gulf of Mexico to the Atlantic Ocean. People who stroll the street can find everything from fine jewelry and quirky souvenirs to tapas, cigars and sinfully good tropical drinks in its colorful establishments.

OCCUPATIONAL HAZARDS? NOT LIKELY! In Key West, it’s perfectly acceptable to state your occupation as “treasure hunter,” “poet,” “drag queen,” “street performer” or all of the above — without eliciting laughter, a disbelieving stare or even raised eyebrows. I can’t think of any other place in the world where that’s true.

No, Key West is NOT normal. A bastion of lovely lunacy, it’s separated from mainland Florida by 42 bridges, more than 100 miles … and an attitudinal shift that must be experienced to be truly understood.

So what’s the best thing to tell curious “real world” friends about Key West? To head south to the offbeat island, of course, and discover it for themselves!