The festival's focal events are to include the dedication of a rainbow crosswalk at the intersection of Duval and Petronia streets, the heart of Key West's LGBT entertainment district. Co-sponsored by the City of Key West and the Key West Business Guild, the rainbow crosswalk is imprinted permanently on the pavement connecting all four corners of the intersection. The dedication is scheduled for noon Saturday, June 13, during the Key West Pride Street Fair.

Other Pride highlights are to include the 2015 Stoli Original Cocktail Challenge's Wednesday night kick-off gala, Friday night run-offs and Saturday night final round. The contest features regional winners from LGBT bars in 14 North American cities, all competing to create an original Key West cocktail that communicates the island's creativity and spirit.

The winner is to be the honorary grand marshal of the 2015 Pride Parade alongside celebrity grand marshals Rodriguez and Christian. The all-welcome procession, to feature a 100-foot section of Key West's famed sea-to-sea rainbow flag, is set to begin at 5 p.m. Sunday, June 14, and proceed up Duval Street from the Gulf of Mexico to the Atlantic Ocean. 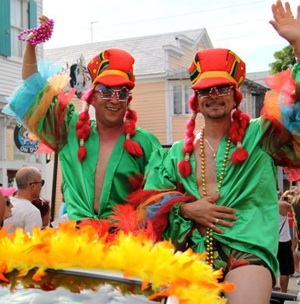 The 2015 Pride Parade is an all-welcome procession, and is to feature a 100-foot section of Key West's famed sea-to-sea rainbow flag.