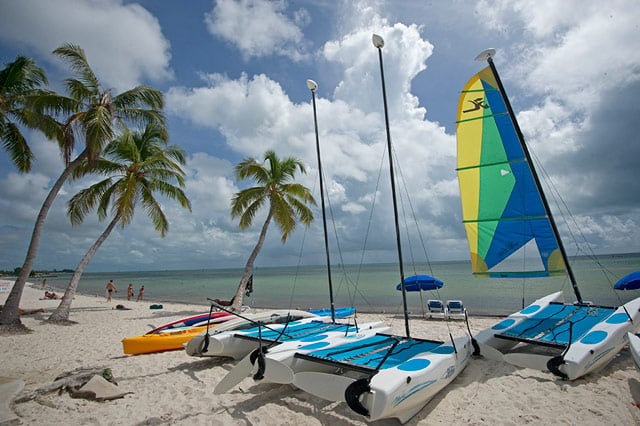 Wherever you are right now, chances are the weather is better here in the Florida Keys. That's true even on a summer day. At the peak of summer, the average high is 89° F (32° C). We don't have any super-highways or urban sprawl to radiate the sun's heat. Not only that, but our islands are surrounded by cooling ocean waters.

Wise Floridians from the mainland flock to the Keys on steamy weekends because the air is usually a few degrees cooler here. The water temperature might be in the mid-80s (30° C) but the sea is nevertheless refreshing for swimming, snorkeling or diving. In the winter, cold fronts can bring frost to mainland Florida, but you can be sure there will be no frost here. Divers or snorkelers usually get by with a “shortie” wet suit, as water temperatures average in the mid-70s.

During these winter months, it almost never rains. By late May, however, the season's first thundershowers start popping up. Rarely do they stick around long enough to spoil an entire day. You might be wondering about the Atlantic hurricane season, which can affect the Atlantic and Gulf coasts of the United States as well as the Caribbean and the Bahamas. The official hurricane season begins June 1st and ends on November 30. Traditionally, the highest potential for storms is between Aug. 15 and Oct. 15. However, the daily weather during this period tends to be some of the most beautiful of the year, and surrounding waters warm and calm.