Paul Menta: A Triple Threat on a 4-Mile Island

He's an accomplished chef, record-holding kiteboarder, business innovator and rum distiller — so the real question for Paul Menta is, what can't he do?

Menta began life in Philadelphia, where he discovered his flair for cooking and enrolled in culinary school. Eventually he traveled abroad to France and Spain to study with local chefs.

Because he had visited the Florida Keys many times during his early years, he knew the island chain was the right place for him.

"I finally felt like I fit somewhere in the world," Menta said. "And it was in Key West."

So in 1984, Key West gained what would soon become one of its most motivated entrepreneurial characters.

Menta's first ambition was cooking. Once settled in Key West, he landed a job at an Italian restaurant — an atmosphere that was very familiar to him.

"I wouldn't have to be in the kitchen until about six at night, so I got to spend my days on the water spearfishing and then run into work and get to cook all night," he said. "I thought to myself, this is the ultimate lifestyle."

Menta cooked in numerous restaurants in town from small locals hubs to the luxurious Latitudes at The Westin's Sunset Key Cottages.

Over the years, he had a significant impact on Key West's culinary scene, priding himself on using only the freshest ingredients and purest foundations to create the best dishes.

In time his entrepreneurial spirit kicked in, leading him to open and own several restaurants on the island including Le Bistro, Amigos Tortilla Bar, Help Yourself and Cuban Coffee Queen — all eateries focused on using fresh ingredients.

No matter what his specific enterprise, he displays a remarkable enthusiasm for Key West complemented by an optimistic attitude about nearly every facet of life. In addition, the ocean exerts a strong pull on the energetic chef.

During long-ago summers in Maui, Hawaii, Menta discovered wakeboarding and kiteboarding, and began participating in competitions during his free time. Because he loves to share his understanding of the world with others, he eventually ventured into another business: a kiteboarding training company called the Kitehouse.

He also earned kudos and respect for his own kiteboarding achievements. In 2001 he set the Guinness World Record for the fastest time kitesurfing the 90 miles from Key West to Cuba. Now many others have completed the same feat.

While many people might settle for being a talented chef, business owner and athlete, that wasn't enough for Paul Menta.

In 2013 he began applying his culinary talents to distilling. He had initially learned to distill alcohol from the chefs he trained with in Europe, and retained an interest in the specialty.

Late in 2013 he opened Key West First Legal Rum Distillery, the island's first such enterprise, housed in an old saloon turned Coca-Cola bottling factory. The distillery pays tribute to the many Keys residents who illegally distilled alcohol during America's Prohibition era and its décor features mug shots and artifacts from that time.

Menta focuses on the concept of "chef distilled," using classic chefs' techniques to create different rum flavors. He uses saltwater-soaked rum barrels that he immerses down the block in the Atlantic Ocean — something no other distiller in the world does.

As well as crafting his rums, he loves teaching others how to distill like a chef.

"I've trained people who have no distilling background, no culinary background, and now they're distilling like a professional chef," he said. "Chefs are even coming down from all over to learn how I do things and to compare ideas on how to distill and the process."

So what could possibly be next for this Key West renaissance man?

Menta recently co-founded Dock To Dish, Florida's first community-supported fishery. The purpose of the program is to bring the health benefits of locally sourced fish and seafood to local consumers, a concept he has embraced throughout his career.

"We're really making sure only three hands are involved: the fisherman, the business or person receiving the fish and the consumer," Menta explained.

While it may seem hard to imagine balancing a passion for cooking, kiteboarding and distilling, the high-energy entrepreneur finds a way to live this dream.

"There is a synergy that exists between all these things," said Menta. "I get to incorporate my cooking and distilling and I get to travel for it — and if it's a great windy kiteboarding spot, I'm bringing my gear with me!

"I like to call it a 'hat trick' of life," he said, "and there's nowhere else in the world I could have made this happen besides Key West." 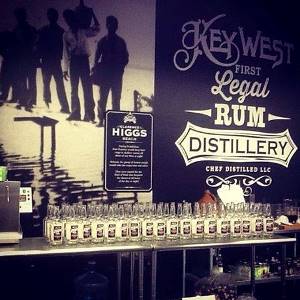