David Sloan: Key Lime Pie and the 'Spirit' of Success

When David Sloan was being kicked out of Key West bars in his early 20s, he never imagined that a few years later he would start businesses, write and publish books and make record-breaking Key lime pies on that very same island. Sloan moved from Pennsylvania to Texas at age 11, spending his youth in the Lone Star State. When the time came for college, it didn't seem like the right fit. "I didn't want to go to college — I wanted to open a bar," Sloan said. To motivate him on a related career path, his parents enrolled him in Florida International University's Hospitality Program where he took several cooking classes. Through his college years, he worked in areas of the hotel industry from fine dining to front desk and managerial positions. After several years, he made a career switch to Premier Cruise Lines, where he was named general manger even before graduating from his program. His position was so impressive that the dean let him skip his final semester's classes to pursue his career. Despite his rapid success, Sloan subsequently found himself growing tired of the corporate world. When he left it all behind, life in Key West beckoned. "I first visited Key West in college, and even though I spent most of the night sobering up in a jail cell, I loved it," he said. It wasn't until he took his first ghost tour in Scotland, however, that the pieces fell into place. "I took the tour and was fascinated by it," he reported. "I got back to the U.S., quit my job and moved to Key West." After a few months, endless nights of research and some help from historian Tom Hambright of the Key West Public Library, Sloan unveiled Ghost Tours of Key West — one of the first tours of its kind in the United States. He also released his first book, "Ghosts of Key West." Almost immediately, the ghost tour and supernatural culture became the rage, gaining massive popularity with visitors and locals alike. There's a lot more to Sloan, than an interest the supernatural, however. He mixes his lively personality and witty humor with his love for Key West in Phantom Press, a publishing company he co-founded with Christopher Schultz. The team has released 10 quirky hits including the collaborative "Quit Your Job and Move to Key West," and Sloan's "The Key West Bucket List." Their most recent offering is Sloan's "The Key Lime Pie Cookbook," featuring recipes for 20 crusts, 20 fillings, 20 sauces and 20 toppings that the author swears can be mixed and matched to create more than 150,000 varieties of Key lime pie. Sloan's connection with Key lime pie, the Florida Keys' signature dessert, didn't end with the cookbook. When he stumbled upon reports of a Key Lime Festival that took place in Key Largo in the 1950s, he was intrigued. "I just thought to myself, Key limes are such an important of our culture, wouldn't it be great to bring it back?" he said. With characteristic enthusiasm, Sloan and fellow creative spirit Marky Pierson staged the reborn Key Lime Festival in Key West in the summer of 2013. Events included a "Miss Key Lime" pageant, a Key lime pie-eating competition and the creation of what is believed to be the world's largest Key lime pie. To make the record-breaking confection, which measured just over eight feet in diameter, Sloan teamed up with Pierson, chef Paul Menta and the Key West Key Lime Company's Jim Brush. Prepared July 4 in a specially made pan nearly the size of a pickup truck, the gargantuan pie was documented for submission to the Guinness Book of World Records. With the second annual Key Lime Festival scheduled for summer 2014, Sloan shows no signs of slowing down. In the next few months, he plans to unveil his new take on ghost tours. Designed as an interactive experience, "Sloan's Ghost Hunt" is to give participants the chance to use devices to detect the supernatural at various haunted stops around Key West. "Haunted stories start to lose a lot over the years and become more legends," Sloan stated. "I want to go back to the roots." More than ghosts and Key limes, he attributes his success to his love for Key West and the never-ending support of the close-knit island community. "I love Key West because it has that small town feel with big city benefits," Sloan said. "It really is easy to succeed here if you put yourself out there and get to know the kind of person you are. "This community rallies around you and helps you to succeed, and that's why I'm here today," he added. "There really is no place in the United States like it." 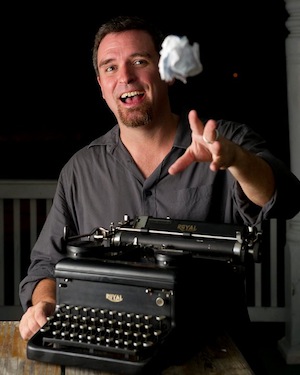 The team has released 10 quirky reads including the collaborative “Quit Your Job and Move to Key West,” showing just how the lighter, more fun side of life is attainable.

“Sloan’s Ghost Hunt,” expected to be unveiled over the next few months, is to give participants the chance to use devices to detect the supernatural at various haunted stops around Key West.

Sloan and fellow creative spirit Marky Pierson staged the reborn Key Lime Festival in Key West in the summer of 2013, spurring the creation of what is believed to be the world's largest Key lime pie.