At only 35 years old, Kevin Geanides has accomplished more in the hospitality industry than many people do in their entire careers. With a resume that includes stints as a sous chef in New York City and chef de cuisine in Miami Beach, and a current position as manager of the Florida Keys' luxurious Little Palm Island, the sky is the limit for this food and hospitality expert.

Originally from a small town in the Atlanta suburbs, Geanides stepped onto the road to success when he attended the culinary school at the Art Institute of Atlanta. While perfecting his craft, he took a job at Atlanta's Renaissance Waverly, where he worked his way up into the fine-dining world.

Geanides moved to New York City after graduating and worked at the exclusive Hôtel Plaza Athénée as a sous chef, while working alongside the man who would become his greatest mentor: Raymond Saja of Karma Resorts in Bali.

After four years in New York he returned south, but this time to Miami. His experience in South Florida's fine-dining industry included positions as chef de cuisine at Turnberry Isle in North Miami and executive sous chef at The Setai in Miami Beach.

Once he had held nearly every kitchen job, Geanides decided to enroll in Florida International University's renowned Chaplin School of Hospitality and Tourism Management.

"It was a little difficult, sitting with people so much younger than me after I'd had so much experience in the industry," Geanides said. "But my experience ended up helping me with my courses and studies."

When he was ready to apply his studies to the real-world hospitality industry, he transferred to the Trump Hotel in Sunny Isles Beach, Fla., and started his own hospitality-training program.

"They didn't have a program at the time, so I just wrote my own," said Geanides. "They still use and follow the program I wrote today."

While some people might find the shift from kitchen to hotel management challenging, Kevin Geanides made the switch almost effortlessly.

"If you can run a kitchen, you can run a hotel," he said. "A kitchen is dynamic and there's always 15 things going on at once, just like a hotel. It was an easy transition for me."

Accessible only by boat or seaplane, the resort is known for its luxurious thatched-roof bungalows and atmosphere of casual elegance. Although hesitant at first, in 2009 Geanides became the property's director of food and beverage.

"The more I read about Little Palm, the more people I met from there, I knew it was going to be the right place for me," he said.

Clearly, that was the case. Geanides worked his way up to the position of resort manager and now has been at Little Palm for nearly five years.

"I feel like I have solidified myself here," he said. "Noble House is the first company I have been so close to."

A resident of Little Torch Key in the Lower Keys, Geanides enjoys spending his downtime boating and fishing with his wife and two children.

"I absolutely love the laid-back atmosphere — I don't know if I could go back to the city life," he said. "I take my own boat to work; I love this small-town feel." 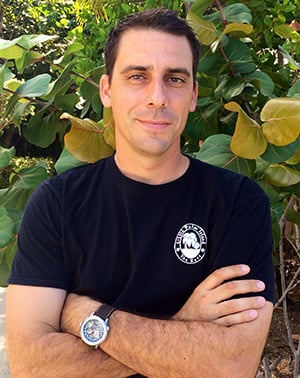 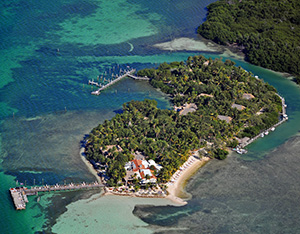 The 5.5-acre Little Palm is so exclusive that it can be reached only by boat or seaplane. (Photo by Rob O'Neal/Florida Keys News Bureau)