As an engineer, David Feder has an innate passion for building and creating. Over his last 30 years in the Keys, this musical visionary has helped build and create a cultural epicenter in the Upper Keys, bringing music and cultural arts to children of all ages through his work with charities and the Islamorada Community Entertainment group.

Now a professional musician, part-time engineer, father and husband, Feder was exposed to music by his family at age 4 through piano lessons. His passion for guitar and music truly was sparked at age 7 by a local folk band in his small rural northwestern Pennsylvania community.

"The sheriff/mayor/dogcatcher in our town played guitar and banjo with friends and I used to go over there and watch him," Feder said. "I got my first look at cowboy songs when I was 7 and learned them all on my little plastic guitar, and that was the beginning."

Feder says guitar appealed to him because it could be carried around, and at that time there were no portable keyboards. Most of his guitar playing was self-taught — and for most of his life, everywhere he went he has brought his guitar with him.

He made his first public appearance as a musician at age 11, playing the "Erie Canal Song" dressed as Huck Finn on a public television show. He has been performing for audiences all across the world ever since.

Feder studied engineering in college at Rochester Institute of Technology. While he always envisioned himself as an engineer, his eccentric personality and natural affinity for music meant he couldn't stay behind a desk all day. In the late 1970s, he sporadically attended music school for two years at State University College at Buffalo.

Shortly after music school, Feder found himself attempting to escape big-city life and writing songs in his head while traveling the southern states by motorcycle — with his guitar strapped to his back and his black Labrador puppy riding on the gas tank.

Feder and the pup made their way to the Florida Keys in 1980 at his grandmother's suggestion, and both have been in the Keys ever since. Feder's coconut-loving Labrador has since died and was buried under a coconut tree, and Feder stays busy with many projects, family life and enjoying the people of his Upper Keys community.

"When I met the people in the Keys I realized that they were very unassuming, welcoming, warm and non-judgmental people," he said. "It was obvious to me that people in the Keys seemed to be much more involved with their neighbors, and I love that about this place."

In tune with that community unity, Feder has played an integral role in the Islamorada cultural scene. He has performed in and organized concerts to raise money to provide art scholarships for Keys students and art and music supplies for local schools, as well as encouraging city officials and raising money to build an amphitheater in Islamorada's Founders Park.

Through several community grants and generous private donations, the amphitheater was built. The non-profit organization Islamorada Community Entertainment, or ICE, was created to maintain and produce community cultural events at the amphitheater. Since its establishment, Feder has served as president of ICE.

ICE produces annual entertainment favorites like Bay Jam, Dancing with Our Island Stars and Bay Jama Reggae Fest. The organization has awarded more than $180,000 in proceeds from those events to local high school students for art, music and dance scholarships. ICE scholarships, typically $200 to $500, have enabled students to purchase paints, brushes and canvases, musical instruments, cameras and lenses, dance, music, art and voice lessons and more to help them pursue their artistic dreams.

"At the end of the day we don't care if these children grow up to become musicians or artists," Feder explained, "but if they have art in their lives they are bound to be more well-rounded."

Feder and ICE pride themselves on their involvement in many arts-related endeavors in the Islamorada area. In the future, they hope to increase their scholarship budget to be able to send an art or music student to college and perhaps provide scholarships for adults for artistic exposure.

Today, Feder sees himself as a musical comedian, taking silly things from his surroundings and turning them into a tune. For inspiration he enjoys experiencing Keys spots — like driving over Keys bridges, sitting in a boat in the backcountry or in the mangroves, or sitting in the forest by his house.

He continues his work in engineering, often combining his passions for music and object construction by doing audio engineering or building custom music equipment for other artists.

"I'm most passionate about exposing children to things that broaden their experiences so that they can judge for themselves what's true and what's not in this world," said Feder. "We all have to do our little part to make this world a better place, and bringing music to children is my little piece."

Feder sees himself as a musical comedian, taking silly things from his surroundings and turning them into a tune. 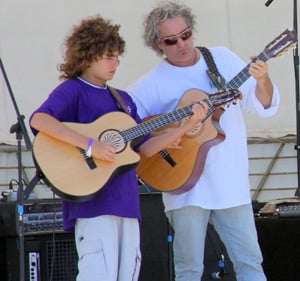 Feder and his son often gig together at Keys musical events.

Dave with his life's love, Suzi on a summer trip to Europe.