FLORIDA KEYS — In 1993, during an action-packed confrontation between Arnold Schwarzenegger and a pack of dastardly villains, missile strikes blew up the Florida Keys' Old Seven Mile Bridge.

While that statement isn't strictly true, it's based on fact — one of many facts about the Keys that are offbeat, slightly improbable and add an engagingly weird vibe to the colorful island chain.

Actually, before he became California's governor, Schwarzenegger starred in a film called "True Lies" that was shot partially in the Keys. The story, about a spy whose personal and professional lives collided in a madcap caper, involved a sequence of helicopter stunts and an explosion on the iconic Middle Keys bridge.

Needless to say, it wasn't the real bridge. However, to movie audiences, the narrow expanse of roadway unrolling above blue water certainly looked like the real thing.

Throughout the Keys, stories abound that sound as unlikely as the saga of Arnold and the exploding bridge. Some are tall tales, but a surprising number are true.

FUN FACT ONE: Key Largo is the site of the world's only underwater hotel. It's called Jules' Undersea Lodge, and dive enthusiasts can spend the night there, with amenities including room service, among the marine life of the Keys. Lodge guests are likely to see vivid-colored fish peering into their bedroom window, trying to catch a glimpse of the creatures unexpectedly sharing their habitat.

FUN FACT TWO: Every year, the Lower Keys stage what is believed to be the world's only Underwater Music Festival. The quirky concert draws divers, snorkelers, curious fish and even characters costumed as mermaids and other mythical denizens of the deep. It's held at Looe Key Reef, acclaimed as a world-class dive site, and spotlights the need for reef protection.

FUN FACT THREE: Moving from oceanic to land-based eccentricities, many visitors to Key West are surprised to find roosters and chickens running wild in the historic Old Town district. The free-range fowl are supposedly descended from chickens kept for food and roosters bred for cockfights before the practice was outlawed. Today at Key West's acclaimed Blue Heaven eatery, "breakfast with the roosters" is served in an outdoor courtyard where resident hens and chicks wander freely.

FUN FACT FOUR: In the Middle Keys, dolphins take center stage for their math skills. That's because Dolphin Research Center, a renowned Middle Keys research and educational facility that's home to a family of Atlantic bottlenose dolphins, spearheaded a groundbreaking study that shows dolphins can perform simple math equations — identifying simple math and distinguishing the difference between numbers they are shown on a board.

FUN FACT FIVE: A 30-foot-tall, 40-foot-long lobster greets visitors to an enticing open-air art enclave in Islamorada. Known as Betsy, the giant replica of a Florida Keys spiny lobster stands outside the Rain Barrel Artisan Village. The 12-legged crustacean was crafted in the 1980s by an area artist named Richard Blaze, and was a much-photographed icon in another Upper Keys location before "relocating" to the Rain Barrel in March 2009.

Want additional Florida Keys fun facts? During any visit to the Keys, encourage local residents to share their stories. It won't be hard to discover more reasons why, in the vibrant subtropical island chain, truth is definitely stranger than fiction. 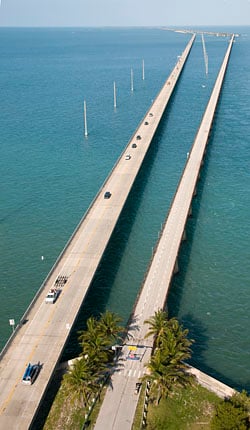 Arnold Schwarzenegger starred in a film called "True Lies" that was shot partially in the Keys, involving a sequence of helicopter stunts and an explosion on the iconic Seven Mile Bridge. 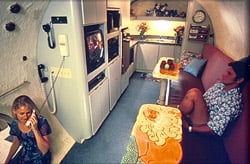 At Dolphin Research Center (DRC), where scientists study dolphin cognition and behavior, the dolphins demonstrate that they’re also terrific when it comes to “thinking” games.