Twenty-five cents can buy the average person a gumball, 15 minutes at a parking meter or a phone call on a pay phone. But for world-renowned underwater photographer Stephen Frink, a quarter led to a profession, a passion and a lifetime of success.

Frink always wanted to be a scuba diver, but his ultimate motivation was the offer of a part-time job cleaning yacht hulls that required him to be dive certified.

"I always say I got certified as a scuba diver for 25 cents a linear foot, because that's what I got paid for cleaning boats," Frink said.

Frink grew up a Midwesterner in Rock Island, Ill., far from any ocean but constantly fantasizing about what it would be like to scuba dive. He took his first and only photography class while getting his master's degree in experimental psychology at California State University at Long Beach.

"Seeing the black-and-white darkroom and the alchemy coming up in the tray, I just knew that was what I wanted to do for the rest of my life," he said.

Frink bought his first underwater camera from a surfer, and initially enjoyed underwater photography as a hobby. Once he finished school he spent six months in Hawaii working as a tourism photographer, shooting what he described as "drunk people at luaus at night," and diving and shooting underwater photos during the day.

Subsequently he gave up the island life and scuba diving for "coat weather" and a darkroom job as a custom color printer in Colorado.

Competitive swimming had been a big part of Frink's youth, and coincidentally was what brought him to the Florida Keys. An old friend from his swimming days who was living in Key Largo and working as a treasure hunter invited Frink to visit him.

He arrived in Key Largo in April 1978 and immediately realized he could make a living processing film and renting camera equipment. He rented a small space in what was the Ocean Divers building, eventually purchasing the entire building and creating what is now the Stephen Frink Gallery and his working office.

Frink has never taken an underwater photography class. Instead, he perfected his craft by trial and error.

"Underwater photography is so unique," he said. "Each day you dive is going to be a little different, and there's always the challenge to photograph even a familiar subject in a better way."

On a rainy winter day in 1979 — a day he remembers distinctly — Frink began his work as an educator.

"A guy drove up in a brand new Cadillac and asked me if I taught underwater photography," Frink said. "I thought the guy looked like he could pay for it, so I said, 'Of course I do,' and I've been teaching ever since."

Today, he teaches master photographers through the Stephen Frink School of Photography, hosting two underwater photography seminars in Key Largo each summer. He also hosts three photography tours per year to exotic locations like Tahiti, Indonesia and New Guinea with his photo-travel company WaterHouse Tours, a business run by his wife Barbara.

His photojournalism career began in 1982 when a Miami-based magazine needed underwater photos of Marathon and called Frink. Although he had never used a wide-angle lens, he borrowed one from a friend, took a model down to Marathon and got the shots. Two weeks later, he was called to hit the road and travel to the Cayman Islands to shoot for the magazine.

Since that time, Frink has traveled the globe as a photojournalist. He spent 17 years with Skin Diver magazine, nine years with Scuba Diving magazine as director of photography and for more than 18 months has been the publisher of Alert Diver magazine. He also authored a coffee-table book titled "Wonders of the Reef."

Over the years Frink has shot thousands of underwater photographs, but the one closest to his heart is a photo of his daughter Lexi swimming with a dolphin when she was only 3 years old. An avid supporter of marine life conservation, Frink is reminded by the photo that his daughter and other Keys kids grew up snorkeling, scuba diving and boating, and that they have a strong respect for the ocean and all its life.

"These Keys kids grew up doing what I dreamed to do as a kid in the Midwest, and it was pretty special to be able to give that to my daughter," Frink said.

As an active environmentalist Frink sits on the board of directors of the Sanctuary Friends Foundation of the Florida Keys, a nonprofit organization created to provide and sponsor educational and research programs to spread public awareness of the importance of conserving and protecting Keys corals. He finds himself in constant awe of what lies just offshore in the Florida Keys.

"Sometimes I'll be out with my buddies and we just shake our head with disbelief," he said. "So many places I go just don't have much marine life anymore, and we have this legacy of conservation here — it is such a big deal. I truly enjoy diving and living here." 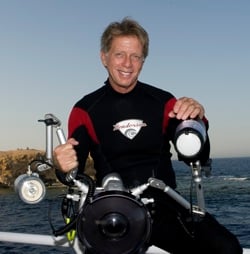 Frink off the coast of the Red Sea. Photos courtesy of Stephen Frink 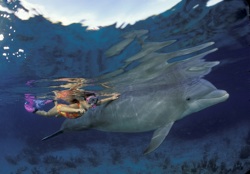 Of the thousands of images Frink has shot, the one closest to his heart is this photo of his daughter Lexi swimming with a dolphin when she was only 3 years old.

A school of reef fish off Tavernier.

A manta ray has a few remora fish tagging along.