Keys Rodmaker is a “Reel” Hit With Anglers

Forty-year Florida Keys resident Rick Berry may be a Miami native, but he well recalls childhood days spent fishing in the Keys with his father.

“When I was a kid I fished with my father every chance I got,” said Berry. “As a teenager, as soon as I could drive, I headed for the Keys almost every weekend to fish the bridges.”

After he studied marketing in college in South Florida, Berry continued to feel the pull of the island chain. He and wife Trula York Berry eventually moved to the Upper Keys to run Bill’s Tackle Shop, a business he had helped his father build.

His own business, Key Largo Rods, was born in 1978. Since then, it has grown into a rod-making empire and a passion and life’s work for Berry.

More than 30 years after the debut of the enterprise, the rod maker modestly considers himself a small manufacturer. Nevertheless, he has grown the business to feature 225 distinct rod models sold throughout the eastern United States, and racked up an impressive total of more than 2,500 models designed and 250,000 built over the years.

”One of the reasons I have so many models is because the other manufacturers knock me off,” Berry said. “We sell primarily to tackle dealers, and I have some accounts I’ve had since 1978.”

The variety of rod materials now includes solid and hollow fiberglass, pure graphite and blends that are part fiberglass and part graphite.

One of Berry’s toughest professional challenges came five years ago when Captain Richard Stanczyk, a leader in the Keys fishing world, pioneered daytime swordfishing and enlisted Berry to design the perfect rod for it.

“Designing swordfish rods is almost the impossible dream because they have to be built to sustain a 50- or 500-pound fish,” said Berry.

It took 22 experimental rods, but Berry finally hit on a design that worked for Stanczyk — a major accomplishment.

“Early on we had the heavy-type rods, but now we are going with lighter and lighter gear because with lighter weight it’s quicker to reach the bottom,” said Berry. “By using 30- to 50-pound tackle, which is very light for fishing in 1,500 to 1,600 feet of water, the fish automatically come to the surface which helps the fisherman quite a bit.”

In addition to Berry’s primary career, he has spent many years exploring print and broadcast journalism. He has written for several Keys newspapers and penned a longstanding weekly column for “The Miami Herald.” His credits in the world of radio include Florida Keys fishing shows, a syndicated offering on Florida Radio Network and a 10-year stint on “Florida Sportsman Live” in Miami.

Berry has designed rods for everyone ranging from weekend anglers to famous people who fish recreationally or professionally.

Berry considers himself fortunate to be in Islamorada, where year-round fishing and immense species diversity combine to make a world-class fishing destination.

As a master rod designer, he is often asked what kind of fishing he likes best. Despite — or perhaps because of — his vast angling experience, he finds it difficult to provide a simple answer.

“The truth is I like it all,” Berry admitted. “Whether it’s in the backcountry of Florida Bay, the gulfside, bridge fishing for tarpon patches, reef or offshore, I’ve done it and love it all.”

Berry has designed rods for everyone ranging from weekend anglers to famous people who fish recreationally or professionally. Photos by Andy Newman/Florida Keys News Bureau

A master rod designer, Berry has made a red, white and blue rod for former President George Bush Sr.

Berry has been fishing the Keys' waters since childhood. 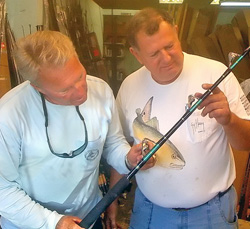