MARATHON, Florida Keys — A visit to a hospital is something that most travelers try to avoid. Not so in the Florida Keys, where a hospital for sea turtles is an acclaimed attraction.

The Turtle Hospital, situated at mile marker 48.5 bayside in Marathon, is the world's only licensed veterinary hospital dedicated to the treatment of sea turtles. It was opened in 1986 with the goal of healing injured sea turtles and returning them to the wild.

Founder Richie Moretti originally recruited a veterinarian to complement his existing turtle education program, and the idea for the Turtle Hospital was hatched. The facility even has a turtle ambulance for patient transport.

Moretti, a skilled staff and a complement of capable volunteers treat injured sea turtles and, whenever possible, return them to the wild. If release isn't feasible, the creatures become permanent residents of the facility.

As well as rehabilitating injured turtles, the hospital's mission is to educate the public through outreach programs with local schools, conduct and assist with research that aids sea turtles in conjunction with state universities, and work toward environmental legislation that makes the beaches and water safe and clean for sea turtles.

Among the patients that recovered at the hospital and later returned to the sea was a 215-pound loggerhead sea turtle named after the American president. "Obama" was rescued on Key West's Higgs Beach Jan. 19, 2009, one day before Barack Obama was sworn in as the 44th chief executive of the United States.

Visitors can take guided educational tours of the Turtle Hospital facilities and sea turtle rehabilitation area. During the experience, they discover how the unique center opened, find out how patients are treated and learn about sea turtles and why they are endangered. A description of the turtles — hawksbill, leatherback, green, loggerhead and Kemps Ridley — is followed by a question-and-answer period.

Visitors also view the preparation room where turtles needing care are cleaned, weighed, photographed and measured, and learn how blood tests can help determine the relative health of a turtle. The tour continues outdoors, where patients and resident turtles in holding pens are fed shrimp, squid and food pellets each afternoon.

Tour admission is a nontaxable donation of $22 per adult and $11 for children 4-12 years old. Children under age 4 are admitted free. 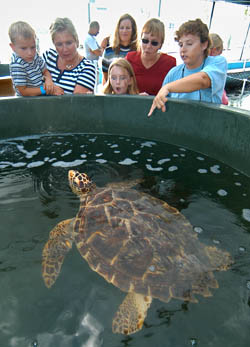 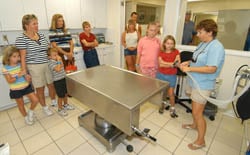 Visitors tour the Turtle Hospital and are shown the center, an oxygen delivery system used by veterinarians when performing surgery on sea turtles. 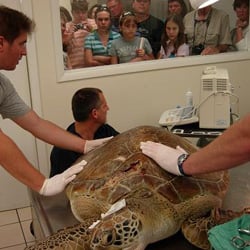 Visitors also view the preparation room where turtles needing care are cleaned, weighed, photographed and measured, and learn how blood tests can help determine the relative health of a turtle.