MARATHON, Florida Keys — Some people might dread a mundane workweek, ticking off the days on the calendar until their next vacation, but not Armando “Mandy” Rodriguez. The guiding spirit behind Marathon’s Dolphin Research Center, or DRC, Rodriguez calls his job a blessing and a gift —one that the Vietnam veteran says rescued him from deep post-war despair.

In 1984, Rodriguez and his then-wife Jayne Shannon-Rodriguez founded the nonprofit DRC after working as head trainer and manager of the research facility that previously existed on the property.

Mandy and Jayne Rodriguez’ baseline philosophies, to teach the world about marine mammals’ innate intelligence and problem-solving skills, as well as how to care for and protect them, are the principles that guide DRC’s entire staff.

With its protective environment for dolphins and sea lions, the facility not only draws national and international visitors to the Florida Keys, but also is a vehicle through which the public can become educated about marine mammals and environmental conservation — a prevalent thread in the Keys’ heritage.

DRC also continues to be a sought-after place to learn and work for young people pursuing careers in research and animal behaviors.

Rodriguez’ connection to marine mammals predates DRC, however. It began during his childhood in Cuba.

“I was taught to swim before I could walk, exposed to mammals at an early age,” said Rodriguez, who arrived in the United States at age 10. “I was an ocean brat.”

When he was 20, after fighting in the Vietnam War, Rodriguez worked at the Miami Seaquarium as “low man on the assistant trainer totem pole.” The experience left him unfulfilled and in search of a teaching institution.

He found it at the New England Aquarium in Boston, where he trained with harbor seals, sea lions and fur seals. Yet it was interaction with dolphins that ultimately captured his attention and became his passion.

Rodriguez’ war experiences had left him edgy and suffering from persistent post-traumatic stress disorder. He credits the dolphins — their energy, behavioral responses, ability to evoke emotions and calm the soul — with helping him coexist better with fellow humans, including those who harassed and persecuted him when he returned from Vietnam.

“The dolphins taught me to live life, accept life and to be … a mellow fellow,” said Rodriguez.

Now that he has spent decades with the gentle cetaceans, he admits to having a few favorites: Kibby, a resident of DRC for nearly 30 years, 21-year-old A.J. and his 7-year-old son Tanner, whose cognitive abilities earned him a brainiac reputation as the “jock who’s smart.”

The “four boys” like to play and romp together, with the dolphins gathering around for the kisses that Rodriguez generously doles out — all while maintaining an eye contact that demonstrates the trust between them.

“They taught me to have fun in life, to eat, play and make love,” said Rodriguez of the dolphins.

“Anyone that goes wrong with that is nuts.” 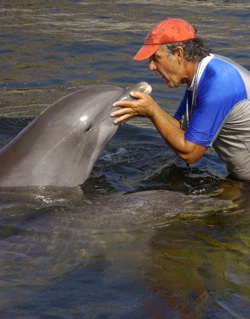 Mandy Rodriguez has trained with the dolphins at DRC, including Kibby, for decades. Photos courtesy of Dolphin Research Center 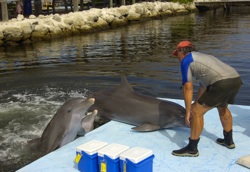 Rodriguez has Kibby, AJ and Tanner have some fun taking turns on a training platform. 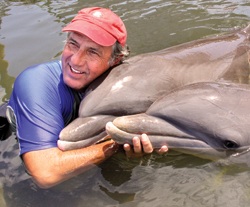 Cuddles and kisses on the nose are generously doled out every time the "four boys" are together.

Mandy signals the dolphins for a high jump, while his granddaughter looks on.

Flipper shakes are a friendly "Hello, how are you?"