BIG PINE KEY, Florida Keys - The largest wreck available for sport diving in the Lower Keys remains a popular stop on the Keyswide Wreck Trek for divers, and a relatively easy introduction into wreck diving for the novice.

The 210-foot Adolphus Busch, intentionally sunk in 112 feet of water on Dec. 5, 1998, lies between world-famous Looe Key and American Shoal southwest of Big Pine Key. The location means the wreck is easily accessible and in proximity to the spectacular underwater beauty of Looe Key reef.

As well as being a short-haul island freighter, the vessel that became the Adolphus Busch had a movie career. It co-starred with Robert Mitchum, Jack Lemmon and Rita Hayworth in the 1957 film "Fire Down Below."

Built in Scotland in 1951 and previously called the London, Topsail Star, Windsor Trader and Ocean Alley, the ship was christened Adolphus Busch Sr. by the Anheuser-Busch brewery founder's grandson, Adolphus Busch IV. The younger Busch, an avid diver and fisherman, donated $200,000 toward the purchase, cleanup and sinking of the ship.

Because the ship was sunk in a protected area, no explosives were used in the scuttling process. Instead, 12 holes were drilled into the Busch and water was pumped into its hull. It settled upright and in perfect condition on a sandy bottom, with its wheelhouse at 70 feet and main deck at 90 feet.

For an extraordinary wreck-reef dive day, underwater enthusiasts combine an exploration of Looe Key Reef with a dive on the Busch.

On any given dive on the Busch, below schools of baitfish, 250- to 450-pound goliath grouper guard a colorful spectrum of snappers, amberjacks, grunts, blue runners, barracuda, sharks and massive schools of juveniles.

Visiting from Florida Bay are schools of snook and permit. Arrow crabs, trumpet fish, brittle stars and the usually rare octopus can be found in nooks and crannies. Sea turtles occasionally make a curious pass through.

Dive shops in the Lower Keys regularly visit the Adolphus Busch. Click here for a directory.

Because the ship was sunk in a protected area, no explosives were used in the scuttling process. Instead, 12 holes were drilled into the Busch and water was pumped into its hull.

People came from all over to watch the spectacle of the Adolphus Busch slowly filling with water and slipping beneath the waves. 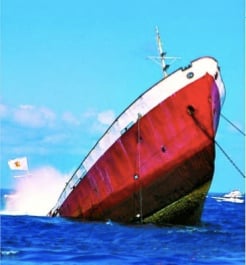