MARATHON, Florida Keys -- Cheryl Messenger and her husband Doug have the best jobs in the world.

After sending their two daughters off to school, they head to work at Dolphin Connection at Hawks Cay Resort on Duck Key where they get to nurture and care for a pregnant dolphin, monitor the growth of her calf via monthly ultrasound, celebrate as she gives birth and then watch the calf thrive, grow and learn.

“For these reasons and so many more, there is no doubt that this is the best job in the world,” said Cheryl Messenger.

Like many Keys residents, the dolphins started out as visitors. The dolphin lagoon at Hawks Cay was opened in 1985 as a winter home for dolphins that performed seasonally in various cities throughout the United States. In 1990, the Chicago Zoological Society assumed operation of the facility, dubbing it the Dolphin Connection. The Messengers privatized it in 1996.

The Dolphin Connection is a founding member of the Atlantic Bottlenose Dolphin Breeding Consortium, a group of seven zoos and aquariums that have joined together to collectively manage a sustainable and genetically sound population of bottlenose dolphins. Of the 17 calves on record as being born within the consortium, Dolphin Connection raised nine of them in its Hawks Cay Resort lagoon.

“The Dolphin Connection values the knowledge and resources of its numerous colleagues throughout the world, understanding that collective knowledge is our greatest strength, which, most importantly, translates into the best possible care for our dolphin family,” Messenger said.

Long before the Messengers had their own family, they got used to raising animal babies together after meeting in 1985 at a conference for animal trainers. They performed together in dolphin shows all day — swimming, playing and diving deep — and also raised dolphin calves and trained and performed with sea lions, harbor seals and false killer whales. They rescued, rehabilitated and released sick and injured marine mammals washed up on beaches, and worked to reintroduce endangered Ridley sea turtles to the island’s waters.

“We were colleagues and best friends, and four years later we were married,” said Messenger. That kind of intimacy carries over into the Messengers’ organization today. Although they have worked with many famous clients over the years, including Jamie Lee Curtis, Jon Bon Jovi, Kenny Chesney, Daisy Feuntes and Michael Keaton, their approach remains refreshingly down to earth.

“These clients are typically on site with family and friends to enjoy some much-deserved relaxation,” said Cheryl Messenger. “They all love the special dolphin programs we arrange for them, out of public scrutiny, where they can just relax and enjoy some quality family time together.”

It’s that family time and the ability to make a difference in the lives of people and animals on a daily basis that Messenger feels is the highlight of their business.

“To see the wonder on the faces of guests exiting the dolphin lagoon, to hear their exclamations of happiness and to receive cards and letters from children whose lives have been changed because of their experience with dolphins is priceless,” she said.

After her adventure at Dolphin Connection, a young girl wrote, “I never knew that it takes so many years for trash to disintegrate. The following day I picked up a plastic bottle that I saw on the ocean floor as I was snorkeling. It's sickening to think that someone would just toss a bottle in the ocean. Dolphins are such amazing creatures and I'm going to do whatever I can to help our ocean stay as clean as possible.”

The Dolphin Connection’s educational messages focus on how to care for the Florida Keys’ marine ecosystem.

“We feel we have a unique ability to reach individuals with this message because the same visitors that are participating in our programs are likely to rent boats, go fishing, snorkel or dive the reefs, and enjoy our beaches,” said Messenger.

Therefore, the couple and their staff see it as their job to help get the word out.

“We should never be naive enough to believe that it is a ‘save the dolphins’ campaign we're promoting,” said Messenger. “We have to think on a larger scale; it has to be a ‘save the oceans’ campaign because the dolphins’ survival relies on the health of the entire marine ecosystem.” The Messengers are well-known and highly respected leaders in the training, care, research and breeding of marine mammals — and have more than 50 years of experience caring for them. In fact, the dolphins they nurture are ideal ambassadors for the message they strive to communicate.

“We can get people to listen, to care and to be motivated to make a difference when we talk about dolphins,” said Cheryl Messenger. “In the meantime, we are protecting all marine species — it's such a simple concept that provides wonderful results.”

For more information about the Messengers and their Dolphin Connection programs, visit dolphinconnection.com. 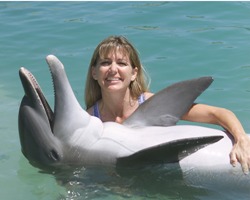 Cheryl Messenger cradles a most cooperative dolphin for a photo opportunity. (Photos courtesy of Dolphin Connection) 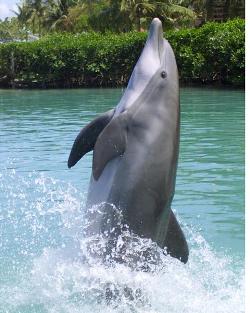 Visitors can get wet above and below water with the Dolphin Discovery program. 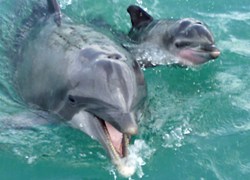 The one-day-old calf is learning the ropes for his upcoming seasons in dolphin-human interaction. 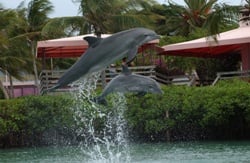 These two dolphins are part of the successful breeding consortium program through Dolphin Connection, at Hawk’s Cay on Duck Key. 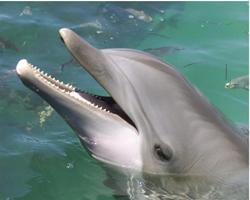 A smiling dolphin face is a welcomed delight for special-needs guests at The Dolphin Connection.