In fact, when Robinson arrived in Key West in 1972, the 24-year-old from St. Augustine, Fla., found himself in a renegade seaport town. Politicos ran the government largely from the Chart Room Bar, hobbyist pot smugglers were admired as romantic outlaws, and local treasure hunters drank rum with Pulitzer Prize–winning escapees from the literary mainstream.

“I got a job at the Chart Room Bar, and Key West was run out of the Chart Room in those days,” said Robinson, whose regular customers included the local sheriff, state’s attorney, mayor and fire chief. “I was in the heart of everything.”

Tall and spare, with long hair and a luxuriant moustache, Robinson displays a storyteller’s wit, easygoing attitude and lively enjoyment of the absurd — valuable personality traits for both a bartender and a flats fishing guide.

During his early Key West years, they also served him well in an offbeat venture begun with buddy Tommy Hicks. “We opened the world-famous All-Breeds Hot Dog Pound on Greene Street,” said Robinson with a characteristic twinkle in his eyes. “Our motto was We Relish Your Buns.”

At that time, Key West’s ramshackle charm and end-of-the-road atmosphere made it a magnet for writers, actors and musicians fleeing the “real world.” Among them were novelist and poet Jim Harrison, “Ninety-two in the Shade” author Tom McGuane and struggling singer/songwriter Jimmy Buffett, who later memorialized the Key West lifestyle in song and earned enduring fame.

“He was not a star then — he was just like you and me,” said Robinson. “He used to sit with his little guitar and amp and play in the Chart Room.”

The two became fast friends when Buffett moved into the apartment above Robinson’s in an old house on the Atlantic Ocean, next to a bar and restaurant named Louie’s Backyard.

"As he got more popular, people would be knocking on the door with a six-pack of beer in their hands wanting to play music with him,” said Robinson. “Most of the time they hit my door because it was on the front.”

When Buffett departed, he loaned his apartment to writer Hunter Thompson, widely credited with establishing the gonzo journalism movement. “Hunter was bizarre,” said Robinson. His tales of the writer include a midnight boating mishap when Thompson inexplicably fell out his craft while trying to dock it — leaving it circling on its own, crashing into nearby boats and running amok in a local marina.

By 1986, Robinson was tending bar at the Afterdeck at Louie’s Backyard, an open-air cocktail deck on the edge of the Atlantic, whose clientele combined local fishermen, upscale tourists and visiting celebrities. It was a position he would hold for 18 years.

Yet while he enjoyed the Keys’ partying pursuits, Robinson also was drawn to life on the water. An angler since his childhood, he bought a boat shortly after arriving in Key West and learned flats fishing tips from author Tom McGuane. Eventually he got his captain’s license and began guiding. For years, he chartered part-time while working at Louie’s.

“I wasn’t sure I wanted to make a job out of something that was a sanity break, that I really loved,” Robinson explained. “If I made it a job, would it be as enjoyable and fun?”

In 2004, he decided to take the chance. He retired from Louie’s Backyard and began chartering full time on his 18-foot Action Craft, fishing the flats for tarpon, bonefish, permit, barracuda and the occasional shark. Unlike some of his contemporaries, Robinson enjoys guiding novice anglers as much as he does seasoned pros.

“I don’t freak out if they blow a cast because they’ve never done it before,” he said. “When you’ve been a bartender for years, dealing with drunk people, you can be patient with one or two people on your boat.”

He particularly enjoys watching repeat clients develop their skills — like Chicago-area youngster Lauren Thornhill, who grew from a little girl catching baitfish to a teenager who landed three tarpon in one day. “She went from Chum Queen to Permit Princess to Shark Slayer to Tarpon Goddess,” said Robinson, proudly.

Poling through the shallows, he also shares his love of the diverse and vibrant Keys environment with his clients — pointing out sea turtles, spotted eagle rays, stingrays and manatees. “I tell people it’s an eco-tour with a chance to catch a fish,” said Robinson.

Just as his father taught him to fish, he handed down his passion for the sport to his two sons. Grown son Cory now works as a mate, while preteen Skyler has already won local tournaments.

It might be a long road from the bartending high life to the natural realm of the flats, but Chris Robinson has traveled it with grace — and few regrets. Some years back, while guiding a Chicago office worker on a February fishing escape, he realized just how lucky he was. “It was about 80 degrees, the water had three different colors and the sky was that big, high-pressure clear deep blue,” said Robinson, “and he looks at me and he goes, ‘Nice office’.” 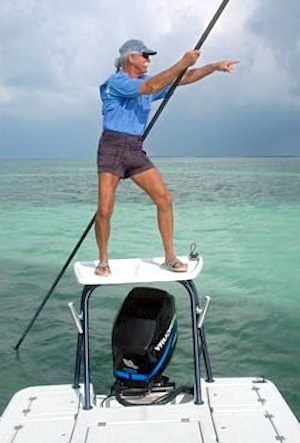 In action on the flats, Chris Robinson guides anglers to tarpon, bonefish, permit, barracuda and the occasional shark. 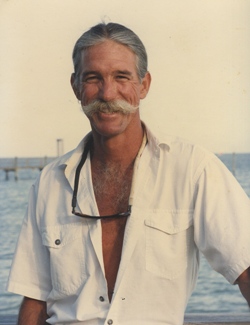 An angler since childhood, Robinson is in his element in the Keys. 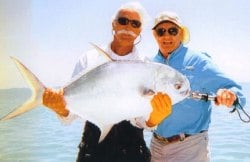 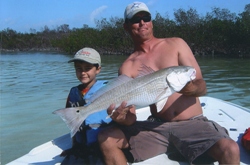 Robinson's two sons share his passion for fishing. Shown here are Skyler Robinson (left) and his big brother Cory Robinson during a productive day on the water. 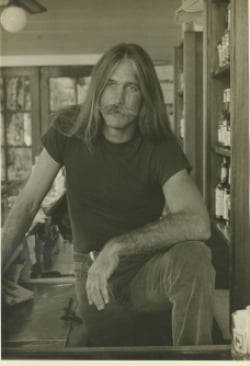