KEY WEST, Florida Keys -- Experts began studying and conserving a gold chalice Wednesday, believed to be more than 385 years old, that was recovered recently from Key West waters during the search for a 17th-century shipwrecked Spanish galleon.

The ornate two-handled chalice is adorned with etched scrollwork on the upper portion, and salvors estimated its value at one million dollars or more.

The chalice was located by Blue Water Ventures diver Michael DeMar beneath about a foot of sand in 18 feet of water approximately 30 miles west of Key West. It was the 20-year-old DeMar's first treasure find.

"I thought it was a beer can, so I kept fanning and fanning the sand, and I came upon this," said DeMar. "Time just stopped -- it was amazing to see that gold down there."

The divers were searching the shipwreck trail of the Spanish galleon Santa Margarita. Dan Porter, captain of Blue Water's salvage vessel, said the chalice was most likely owned by one of the Margarita's wealthy passengers and may have been a communion cup.

“It's almost five inches tall and it's large enough to set a softball inside,” said Porter.

The search for Santa Margarita artifacts was begun more than a quarter-century ago by the late Key West treasure hunter Mel Fisher. Today, the Blue Water team is leading that search under a joint-venture partnership with the Fisher family-owned company, Mel Fisher's Treasures.

Fisher's son Kim Fisher and grandson Sean Fisher were at the dock Wednesday morning when the Blue Water crew arrived with the chalice.

“It will probably be valued at upward of a million dollars,” said Sean Fisher. “We poured a glass of champagne in it and we all took a sip.”

According to Blue Water archaeologist Dr. R. Duncan Mathewson, the chalice was found at the northernmost point of Blue Water's search area, indicating the team is getting closer to the remainder of the lost Margarita artifacts.

After the chalice arrived in Key West, it was transported to the Fisher conservation laboratory.

Head conservator John Corcoran began the meticulous process of studying and cleaning it, working slowly and carefully to remove the whitish encrustation that covers parts of the artifact.

Experts hope the cleaning will reveal more details of a crest, etched or engraved inside the bottom of the chalice, that may provide clues to its origin or ownership. 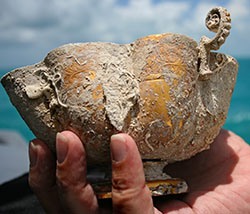 The gold chalice with etched scrollwork is displayed after it was located by shipwreck salvors. Photos by Gary Randolph/Mel Fisher's Treasures 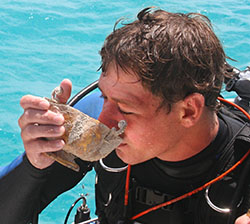 Blue Water Ventures diver Michael DeMar sips champagne from the chalice. It is believed to come from the 1622 Spanish galleon Santa Margarita. Blue Water is searching for the remains of the Margarita under a joint-venture partnership with Mel Fisher's Treasures.