KEY WEST, Florida Keys - When internationally acclaimed singer/songwriter Jimmy Buffett wrote "I Have Found Me a Home" about Key West, he described riding his old red bike to "the bars and the beaches of my town." Through Sunday, Nov. 4, the island popularly credited as the inspiration for his hit party anthem "Margaritaville" is to host as many as 3,500 of the entertainer's Parrot Head fans for their 16th annual Meeting of the Minds convention.

The 2007 convention is themed "Barefootin' Key West," commemorating Buffett's rendition of "Barefootin'" on the soundtrack to the 2006 film "Hoot."

Buffett, who peppers his lyrics with references to Key West locales, established his Margaritaville Store in the island's Lands End Village in 1985. A mecca for his fans, the store is now located beside his Margaritaville Café on Key West's historic Duval Street. He also maintains a recording studio, Shrimp Boat Sound, overlooking the former shrimp docks.

While Buffett occasionally makes a surprise visit to Key West for the convention, Parrot Head audiences will have plenty of opportunity to enjoy the laidback "island rock" musical style he pioneered. The packed lineup of performers includes regional and Parrot Head favorites Howard Livingston and Mile Marker 24, Scott Kirby, Jim Morris & The Big Bamboo Band, Tropical Soul and the John Frinzi Band - as well as Buffett tribute bands such as Gary Roland and the Landsharks.

Most convention activities are open only to registered members of Parrot Head clubs.

As well as sharing an appreciation for Buffett's music and the Caribbean atmosphere it promotes, Parrot Head club members focus on charitable, environmental, educational and humanitarian activities. Since 2002, members of the more than 200 national and international Parrot Head chapters have contributed more than $10.5 million and nearly 1.8 million volunteer hours to local and national charities.

For more information about the Parrot Heads convention in Key West, visit the Meeting of the Minds section of the Parrot Head clubs' official Web site at www.phip.com. 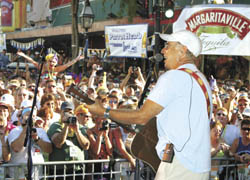 Parrotheads are to be "Barefootin' in Key West" in November during the annual convention, capped off with a performance by lead parrothead Jimmy Buffett. 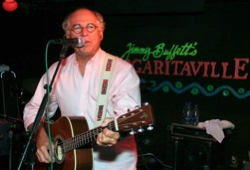 The 2007 convention is themed "Barefootin' Key West," commemorating Buffett's rendition of "Barefootin'" on the soundtrack to the 2006 film "Hoot." (Photo by Rob O'Neal/Florida Keys News Bureau)