Given her lifelong love of dolphins and familiarity with the Florida Keys, Mary Stella is a natural to serve as media relations coordinator at Dolphin Research Center on Grassy Key in the middle Florida Keys.

Mary's passion for her job is evident as she walks around the boardwalks at DRC greeting the resident dolphins. The open-air facility is an extension of the open water, with tiki huts throughout and lagoons where research and programming take place.

Stella first laid eyes on the friendly dolphins in the early 1960s as a New Jersey native vacationing in the Florida Keys with her parents. She was instantly hooked.

"Growing up at the Jersey shore we loved to fish, swim and spend time on the water, so the Keys were the perfect winter vacation destination," said Stella.

She recalls her initial visit to Santini's Porpoise Training School in the middle Keys - home to Mitzi, one of the stars in the first Flipper feature film, along with numerous other dolphins.

"At the end of the show, all children who could swim and were wearing bathing suits lined up at one dock and jumped into the front lagoon, one at a time, for a dorsal tow with Mitzi," Stella said. "That was my very first close-up introduction to dolphins and my first dolphin swim. I still have home movies of the adventure."

Each year when vacationing in the Keys, Stella made a point of revisiting the dolphins at Santini's, which later evolved into Dolphin Research Center. DRC opened its doors in 1984, and by 1989 she had become a donor member of the nonprofit organization. Her involvement over the next few years led to a five-week volunteer stint in the winter of 2000.

"Those five weeks were amazing," Stella said. "I got to know DRC, the dolphins and the people on a deeper level and was completely invested in the DRC mission."

By the end of 2001, she had moved to the Keys and was a full-time DRC employee.

Even early on, Stella's love of dolphins led to environmental advocacy on their behalf. In the 1980s she wrote letters to tuna companies asking them to support dolphin-safe fishing practices.

"I convinced all my co-workers at the advertising agency where I worked at the time to not eat tuna until the companies came around," she recalled.

Today, her work involves talking and writing about DRC's "residents" -dolphins A.J., Aleta, Calusa, Delphi, Kibby, Merina, Molly, Pandora, Pax, Rainbow, Sandy, Santini, Talon, Tanner, Theresa and Tursi, and sea lions Kilo and Loki. She knows them as individuals and friends who make her smile by responding to her when she walks past their lagoons.

Advocating about DRC's mission and programs to both guests and members of the media also is part of her job.

"I am blessed to work with a phenomenal group of people who are deeply passionate and committed to their work," Stella said. "Knowing that what each of us does benefits dolphins, manatees, other marine life and the environment provides a great deal of personal satisfaction and is incredibly rewarding."

Dolphin Research Center offers a wide variety of programs for visitors including Trainer for a Day, Researcher for a Day, Dolphin Encounter, Dolphin Splash, Meet the Dolphin and even Paint with a Dolphin. A program for individuals with special needs also is available.

Research is another component of the work at DRC. Recent findings of a study at the center showed that dolphins can complete simple mathematical computations - an astounding discovery that gives new insight into their intelligence.

Stella's experiences at DRC, she says, are among the primary reasons she loves her job. For example, one day she was taking her lunch break beside one of the lagoons and Pandora, a young dolphin resident, playfully made eye contact and tossed her a toy ring. Stella tossed it back and the game continued for some time, with guests getting in on the fun, too.

Involvement in DRC's special needs programs is another of Mary Stella's joys.

"I've had the privilege of experiencing some beautiful things taking place with people who have special needs and come to interact with the dolphins," she said.

She spoke of one particular group of deaf students who visited DRC in 2006 and learned to communicate with the dolphins using hand signals. "To see the students' joy and excitement over this experience really touched my heart."

In addition to her work at DRC, Mary is a published romance novelist with two romantic comedies set in the Keys under her belt and a third on the way. She credits writing as her strongest form of creative expression -something she has loved since childhood and considers a great gift.

Stella also is a saltwater aquarium hobbyist. At the end of the day, she enjoys relaxing by staring at the fish and corals in her 54-gallon live reef tank, which she calls "a living work of art in my living room."

Mary Stella's work at DRC is completely in harmony with her philosophy of life: "Instead of focusing on things that only benefit ourselves, each of us needs to contribute to the world at large," she said. "The good that we put out in the universe benefits all living things."

Mary Stella loves to spend time on the water, something that she loves more than the water is getting a kiss from her favorite friend, Pax! 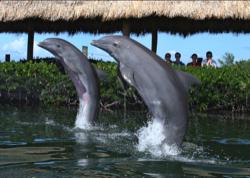