A 7,500-square-foot representation of the living coral reef that parallels the Florida Keys, the Wyland mural wraps around a four-story, four-sided building at mile marker 99.2 in the median of the Overseas Highway that bisects Key Largo.

It is the final, in a planned series of 100 mammoth marine murals, that Wyland intends to paint in the United States.

Although a dedication was staged Feb. 12, Wyland came back Feb. 23-24 "to add a few more fish and a stingray to honor my friend Steve Irwin." Irwin, best known for his television series 'The Crocodile Hunter,' tragically died in September 2006, after being pierced in the chest by a stingray spine while snorkeling at the Great Barrier Reef in Australia.

Wyland, who signed the artwork Feb. 24, also added lighting to illuminate the mural so it could be appreciated 24 hours a day.

"This is a mural that is really the gateway to the Florida Keys," said Wyland, whose name is legally one word. "I’m a diver so I take all that inspiration and all that beauty and simply paint it up on the wall for people to enjoy.”

Wyland, who has residences in California, Hawaii and the Keys, has spent more than 20 years diving in the Florida Keys National Marine Sanctuary. He credits the Keys reef, the only contiguous coral expanse in North America, for inspiring much of his work.

Like Wyland's previous walls, the Key Largo mural is designed to motivate environmental awareness and stewardship, particularly in children.

"Art is something that can touch people’s emotion," said Wyland, who began the Key Largo wall Feb. 1. "You can choose not to go into a gallery or a museum, but you can’t ignore a giant mural like this. If people see this beauty, I know they’ll want to get involved in protecting it.”

During breaks from creating the mammoth mural, Wyland painted separate canvases with kids, noting the importance of inspiring youngsters to preserve the world’s oceans.

Wyland, who began painting "Whaling Walls" in 1981, intends to paint his last huge artwork, projected to be more than two miles long, in Beijing, with children from around the world, prior to the 2008 summer Olympics. 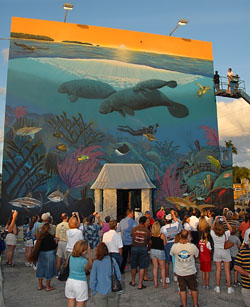 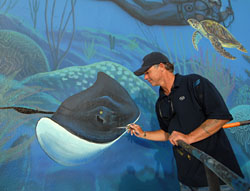 Wyland paints a stingray on the south wall of the Key Largo mural to honor Steve Irwin. 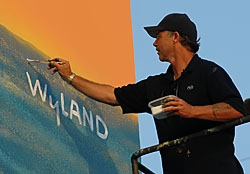 The artist signs his work.