GET TO KNOW NORTH AMERICA'S ONLY LIVING CORAL BARRIER REEF

FLORIDA KEYS - Just a few miles from the shoreline of the Florida Keys is the most extensive living coral reef tract in North America and the third largest in the world.

Built over thousands of years from the calcium carbonate skeletons of particular coral species, the base reef is home to hundreds of other species, which divers and snorkelers simply lump together as "coral."

But corals come in hard and soft varieties, with some others that are termed false corals.

All corals are fleshy animals, called polyps, which have tentacles, stinging cells (called nematocysts) and a central digestive cavity, and are symmetrically round.

The polyps secrete a protective layer of calcium carbonate that forms a cup-like structure, but the protection is minimal. A slight tap from a swim fin or a gentle touch of a finger will kill the polyps.

Polyps multiply to form coral colonies, which are the recognizable formations on the reef. Over hundreds or thousands of years, colonies of polyps grow over the skeletons of dead polyps. Coral mounds and large stony corals, like brain and elkhorn coral, are really made up of just a thin top layer of living animals.

Soft corals are related animals, but their polyps secrete a combination of protein and calcium carbonate, making their skeletons flexible. Sea fans (gorgonians) and sea whips are prime examples.

The aptly named brain coral is one of the easiest of the hard corals to identify. The rows of polyps, hiding in their fragile skeletons, zigzag atop their ancestors' calcified remains in patterns that resemble slightly rounded brains. There is no evidence that suggests brain corals are any smarter than other corals.

Star corals grow on both relatively flat surfaces and mounds. The polyps look like slightly flattened volcanoes, each about a quarter-inch tall.

Lettuce corals form leaf-like structures with haphazardly-patterned ridges. The polyps are the small white star-shaped spots in the ridge valleys.

Hard corals also include branching corals like finger corals, mounds of short, chubby, blunt-ended "fingers." These corals are ideal hiding places for shrimps, brittle stars and other invertebrates, most of which feed at night.

Elkhorn corals are flattened versions of an antler-like formation. They grow into dramatic extended shapes but can be toppled by strong surf or currents. Sometimes the elkhorn corals begin to grow anew after breaking from their original branch.

Soft corals are often mistaken for plants. Many wave slowly in the gentle Keys currents, looking like leaves blowing in a breeze.

One of the most prevalent soft corals in the Keys is the sea fan, also called gorgonian. The purple variety looks like a woven lace fan with deep purple branches.

The green sea fan is usually more yellow-green and tends to be smaller than its purple cousin. Both the green and purple sea fans are prey to the flamingo tongue snail, which looks like a one-inch-long barrel covered by light brown disc-shaped designs on a whitish background.

Sea whips are long-fingered corals. Some form large fan-shaped colonies, while others look like long, thin cacti swaying in the current.

Sea plums look like stringy feathers and among the most flexible of the soft corals. The plumes are often the dominant coral on some reefs.

Because all corals have nematocysts, all corals can sting the unwary diver or snorkeler. Allergic reactions to the stings are rare but not impossible.

The branching fire coral, technically a coralline hydroid, causes perhaps the most painful sting of any coral on Keys reefs. Named for the burning sensation its nematocysts cause (not its color), the fire coral is stalk-like with short branches. Generally beige in color, with a slight tint of green, the fire coral sometimes attacks gorgonians and entwines itself in the sea fan structure.

For both humans' and corals' sake, it's best to keep a hands-off approach to coral. 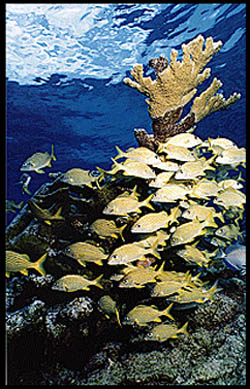