ISLAMORADA, Florida Keys -- About five years ago, when veteran Florida Keys angling guide Skip Nielsen decided to give up the bluewater for the backcountry, he probably contemplated he would never pursue a billfish for a client again.

But last Tuesday, Nielsen found himself in the unusual position of presenting a live mullet to a seven-foot-long swordfish.

But it was not 30 miles off the Florida Keys, at a depth of more than 1,000 feet in the Gulf Stream, the swordfish's usual habitat. And it was not from a 40-foot or larger sportfishing boat, the usual platform for such an endeavor.

"It was about noon and we had just finished a successful morning tarpon trip, with two fish caught," said Nielsen, who is based at Bud N' Mary's Fishing Marina. "As we headed back, I saw this purple thing swimming about 300 yards away.

"I knew exactly what it was," he said. "I put on a live mullet and we trolled it very slowly in front of the fish."

Nielsen said the swordfish tried to whack the live mullet with its long bill, but missed it.

"The fish was completely lit up like a Christmas tree," he said. "But it just couldn't catch the bait."

So Nielsen had Carter reel in the bait. Nielsen then stunned the mullet and Carter put it back out, hoping it would not escape the swordfish's mouth.

As the swordfish attempted to attack the bait again, Nielsen said, the leader and hook accidentally became entangled in the fish's tail.

It took more than two hours for Carter to bring the fish to the boat. The swordfish tipped the scales at 65 pounds.

"That fish was definitely lost," Nielsen said. "I'm sure it was trying to get from the Gulf of Mexico to the Atlantic Ocean, but it took a wrong turn before the Dry Tortugas."

From stories he has heard, Nielsen said he believes his swordfish was only the fourth seen in the same part of Florida Bay in the last 50 years.

"Folks say that in the 1950s someone harpooned a 650-pound bluefin tuna in the same spot," he said.

Nielsen originally wanted to release the swordfish, but another captain who stopped to watch the battle suggested he keep the fish for food, since it was unlikely to survive in the bay. For personal use, Nielsen posses a NOAA Fisheries permit that allows a recreational angler to keep one swordfish per day.

“The funny thing is that a few days ago I was thinking I would probably never see a real swordfish, let alone catch one,” said Carter, a consulting actuary. “The whole thing was like a dream.

“Who would have ever thought that could happen," he mused. 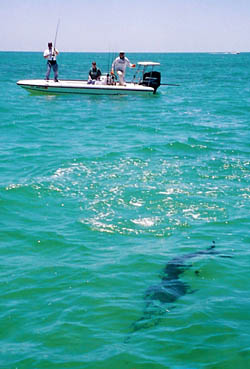 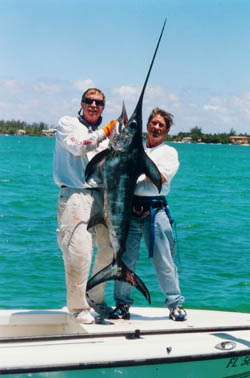