Six state parks in the Upper Florida Keys offer some of the Keys’ most scenic wide-open spaces for social distancing, solitude and outdoor recreational activities like hiking, swimming, snorkeling and paddling. These parks are rich with fascinating Florida Keys history, upland and coastal landscapes and underwater life. 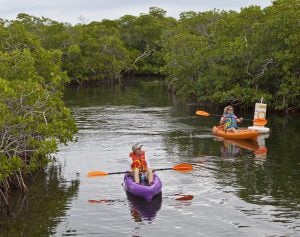 Most parks are only footsteps from Florida Bay’s aquamarine waters to the west and the turquoise Atlantic Ocean to the east. Read on to discover the highlights of each one — and find out why they’re deservedly acclaimed among the Keys’ prime natural attractions.

Dagny Johnson Key Largo Hammock Botanical State Park. This 2,805-acre northernmost park has one of the United States’ largest tracts of West Indian tropical hardwood hammock. With more than 6 miles of shaded trails, accessible to both bikes and wheelchairs, the park is home to 84 protected species including the endangered Key Largo woodrat, wild cotton, mahogany mistletoe and American crocodile. It lies on County Road 905, a half-mile north of the intersection with U.S. 1 at mile marker 106.

At Pennekamp’s visitor center, you can enjoy a 30,000-gallon saltwater aquarium, six 100- to 200-gallon aquariums and nature videos. There’s also kayaking, paddleboarding and saltwater fishing, a mangrove wilderness and tropical hammocks. Established in 1960, the park was named after John Pennekamp, a Miami Herald editor-columnist who also helped create Everglades National Park. Listed in the National Register of Historic Places since 1972, it’s located at mile marker 102.5. 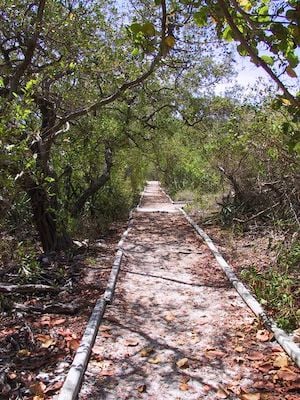 Windley Key Fossil Reef Geological State Park. On Windley Key, this 300-acre park was formed by fossilized coral known as Key Largo limestone. Its quarry was used to produce Keystone, a decorative stone, until the 1960s. The park’s land was owned by the Florida East Coast Railroad, which used the stone in building Henry Flagler’s astonishing Florida Keys Over-Sea Railroad in the early 1900s.

With 1.2 miles of trails winding through a fossilized reef, the park has five short self-guided tours to wander at your leisure. Closed Tuesdays and Wednesdays, it’s located at mile marker 84.9 near Islamorada.

Lignumvitae Key Botanical State Park. This 287-acre park, with virgin tropical hardwood hammock, offers a rare look at island-style living in the Upper Keys during the 1930s. Wealthy Miami chemist William Matheson bought the tiny island in 1919. Lignumvitae Key is accessible only by boat or kayak, which you can rent from several Islamorada-area operators. It’s about a mile west of the Overseas Highway at mile marker 77.2 in Islamorada and is closed Tuesdays and Wednesdays.

Indian Key Historic State Park. Also accessible only by boat, this 8-acre island was developed by wrecker John Jacob Housman as the site of a lucrative business that salvaged cargo from shipwrecks in the 1800s. Once the Keys’ second largest community (behind Key West), Indian Key was Dade County’s first county seat in 1836. It’s a great spot to swim, sunbathe and hike. To get to Indian Key, located off mile marker 78.5 in Islamorada, rent a private boat or kayak. (For kayak rentals, call 305-664-9814 or 305-517-4177.)

In addition to these intriguing Upper Keys sites, you’ll find more state parks in other parts of the island chain. Check out the full roster here, and then consider a road trip to explore the open-air havens in person.