In these days of social distancing, having a chance to see friends in person is such a treat. I recently had the opportunity to participate in a small gathering of Florida Keys locals. Together we formed a beautiful sea of colorful, socially distanced masks. Although we couldn’t see one another’s bright smiles, we all joined in on some gregarious elbow bumping and welcoming eye winking on what would be a very special day for all. 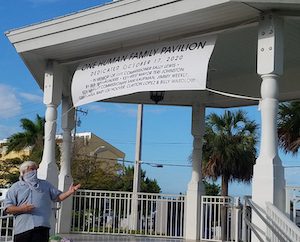 We assembled together to celebrate the 20th anniversary of our island’s “One Human Family” motto and officially name a portico and bandstand in Key West’s Bayview Park the One Human Family Pavilion.

In October 2000, the Key West City Commission unanimously adopted “One Human Family”  as our island’s official philosophy. The commission’s proclamation read, in part, “We want to share our unique perspective and simple (but true) words of hope, ‘ONE HUMAN FAMILY,’ with our global neighbors, so others can find inspiration to grow beyond the artificial limitations of racism, nationalism, sexism, classism, monotheism, prejudice, homophobia (and every other illusion used to try to separate us from all being equal) …”

A few months later, the Florida Keys’ Monroe County adopted it for the entire island chain. Our islands may be separated by many bridges, but are tightly bound by a proud community of warm-hearted islanders.

Today the “One Human Family” message resonates worldwide, displayed in more than three million free bumper stickers distributed to people in 95 countries — including members of the remote Datoga tribe in Africa’s Sahara Desert.

On Sept. 16, 2020 (a year that might just become known as the year of the mask), our City Commission again voted unanimously. This time, however, it was to officially dedicate a local landmark with our all-welcoming motto. 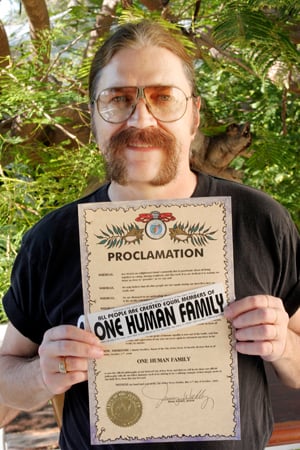 City Commissioner Sam Kaufman proposed naming the portico and bandstand together the One Human Family Pavilion.

The grand bandstand was built in 1990, spearheaded by then-City Commissioner Sally Lewis with State Rep. Ron Saunders and the local Cultural Affairs Committee. However, it was never given an official name.

I would like to share with you a beautiful quote by the “One Human Family” founder, JT Thompson.

“Show what our motto means to you, and with ‘One Human Family’ in our hearts and our actions, we are working together to make the world of tomorrow a better place,” he said. “And Key West is a loving, inclusive community showing the world that we can live as one!”

National and international organizations have used the concept to increase awareness of diversity.

In addition, JT reported, world leaders including Barack Obama and Pope Francis have referenced it in speeches, and the Dalai Lama included it in writings (for a small island, we sure get around).

“One Human Family” stickers are available for free worldwide. An all-volunteer non-profit group spearheads their distribution, with printing and mailing funded by donations.