By Carol Shaughnessy|2020-10-14T17:24:22-04:00October 14, 2020|
Titled “A Dark and Spooky Night,” this miniature float created by Donna Coffin took top honors in a previous “Smallest Parade in the Universe.” The mini-parade will stream live for fans of Key West’s Fantasy Fest.

Fans of Key West’s Fantasy Fest can enjoy two streaming events that showcase the masking and costuming festival’s creativity and spirit — despite the cancellation of the Oct. 16-25 in-person celebration to guard against coronavirus spread.

As well as typically drawing large crowds for its lavish Duval Street parade and elaborate costume competitions (including one for pets and their people!), the annual festival provides a major fundraising opportunity for local nonprofit organizations. And that tradition is being carried on by the virtual events scheduled Oct. 16 and Oct. 24.

It  will stream from 7 to 9 p.m. Friday, Oct. 16, on the festival’s fantasyfest.com website and at facebook.com/FantasyFest.

Plans call for the show to feature performances by multifaceted entertainer and female impersonator Randy Roberts (who has appeared on NBC Television’s “America’s Got Talent”); amazing cabaret singer Jennifer McClain; The Kinsey Sicks, a self-proclaimed “dragapella beautyshop quartet” whose career credits include an off-Broadway smash; rocker and Key West police officer Joe Tripp, and many others.

It’s a very worthy cause, so viewers are encouraged to donate what they can — just click here for details. 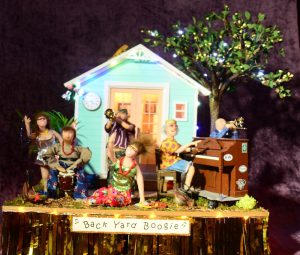 The following Saturday, Oct. 24, festival aficionados can enjoy a small-scale virtual version of Fantasy Fest’s traditional Duval Street parade of exotically decorated floats. (After all, Fantasy Fest — even in a keep-the-spirit-alive online incarnation — just wouldn’t be Fantasy Fest without a parade.)

Unique miniature floats are to take center stage in the 7-9 p.m. “Smallest Parade in the Universe,” to be live-streamed at fantasyfest.com, facebook.com/FantasyFest, marchouse.org and TSKW.org.

Thanks to some behind-the-scenes magic, they’ll “parade” down a replica of Duval Street crafted by a local artist.

According to “Smallest Parade” rules, all participating floats must be “PG-13” rated and can’t exceed 18 inches in length, width or height. But they CAN include lights, animated elements, and as much creativity as their builders can muster.

Standouts in past years’ mini-parade (yes, this is an annual event even when the full-scale parade takes place) have displayed super-sized portions of imagination, color and talent — including a float depicting an intricate “haunted” house, and one carrying tiny “musicians” staging an open-air jam session.

At the parade’s conclusion, the floats will be sold via an online auction. Proceeds benefit the Monroe Association for ReMARCable Citizens, a Florida Keys nonprofit that provides life services for adult developmentally and intellectually disabled residents. 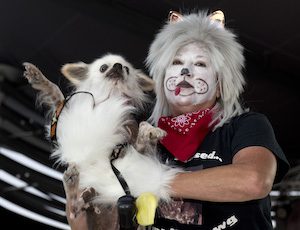 The “Smallest Parade” live-stream will also include the eagerly awaited announcement of the 2021 Fantasy Fest theme.

The two streaming events, however, aren’t the only treats festival organizers have in store. Remember the costume contest for pets that was mentioned earlier?

Like the other official Fantasy Fest events, the beloved Pet Masquerade was forced to cancel its 2020 “animal antics” in Key West. But critters and their human companions can still strut their stuff via photos posted online.

Pet lovers can e-mail two images with their furred and feathered friends in costume to petmasquerade@gmail.com and donate $25 to Lower Keys Friends of Animals, and the images will be posted at facebook.com/keywestpetmasquerade.

In addition, athletes who love offbeat costumes can check out the virtual version of the festival’s Heroes and Villains 5k. And finally, for people who just happen to be visiting Key West in late October, festival organizers are concocting a socially distanced self-guided driving or biking tour of decorated “Fantasy Façade” homes and businesses.

Bottom line? The color, creativity and community spirit that characterize Fantasy Fest are alive and well. And the 2021 festival is scheduled Oct. 22-31 — so mark those calendars for next October!