The Keys on the ‘Silver Screen’

By keysvoices|2021-09-15T15:48:11-04:00September 15, 2021|
The African Queen, the original vessel from director John Huston’s classic 1951 film by the same name, sails on a Key Largo canal while being steered by Steve Bogart (second from right), son of actor Humphrey Bogart. Built in 1912, the 30-foot boat that carried Humphrey Bogart and Katharine Hepburn has been refurbished to provide Florida Keys visitors an opportunity to cruise aboard the cinematic icon. (Photo by Andy Newman, Florida Keys News Bureau)

The Florida Keys have long been a popular choice for film producers looking for a subtropical adventure setting for their next big project — and the island chain has served as the backdrop for a wide range of films since the late 1940s. 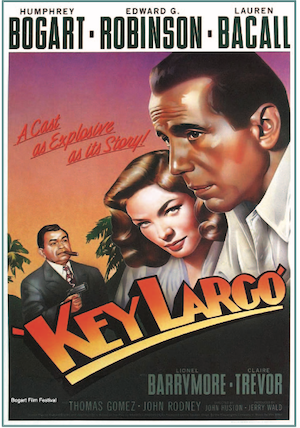 One of the cinema classics partially shot in the Keys is “Key Largo,” starring Humphrey Bogart and Lauren Bacall.

In fact, just as the Keys’ enticing locales inspire visitors to come back again and again, they also attract filmmakers who cast the islands as “characters” in their productions.

Some of the most memorable movie masterpieces set (at least partly) in the Keys are chronicled here — and though some of them are older or even cinema classics, the wealth of contemporary streaming options means they can likely still be viewed.

“Key Largo.” The northernmost island in the Florida Keys is Key Largo, where Hollywood greats Humphrey Bogart and Lauren Bacall filmed part of the movie of the same name back in 1948. Today, visitors can stop by the Caribbean Club in Key Largo to see one of the filming locations from the movie. Dating back to 1938, it’s the oldest bar in the Upper Keys and a true relic.

Film fans can also take a trip on the fully restored African Queen steamboat that starred in the Bogart movie “The African Queen.” Added to the U.S. National Register of Historic Places in 1992, the iconic steamboat is available for daily sightseeing cruises along Key Largo canals. Passengers can even ask the captain for a turn at the helm.

“The Rose Tattoo.” Anna Magnani won the Academy Award for Best Actress for her performance in the movie, which was set in Louisiana but actually entirely filmed in Key West. Today, visitors can spot the “Rose Tattoo House” at the corner of Pearl and Duncan Streets. The film was based on a play by Tennessee Williams — who lived in Key West for more than 30 years — and it’s said that the playwright often stopped by the house during filming. 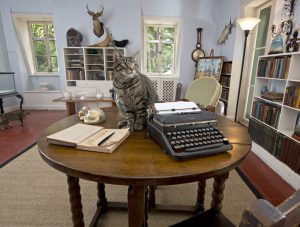 Key West’s Ernest Hemingway Home & Museum has been a setting for films ranging from “Licence to Kill” to “The Beach Bum.” In the latter, Hemingway’s writing studio (shown here) was the study of main character Moondog. (Photo by Rob O’Neal, Florida Keys News Bureau)

“Licence to Kill.” This James Bond movie starring Timothy Dalton sees 007 relinquish his licence to kill, disobey his orders and embark on a revenge mission. The notorious opening scene takes place on the Seven Mile Bridge that connects Marathon and the Lower Keys, with other segments filmed at Key West International Airport, the Key West Lighthouse and the Ernest Hemingway Home & Museum. In addition the film includes a wedding scene at St. Mary Star of the Sea, now a basilica, featuring scores of local residents as extras. FYI, the Keys also were a notable location for a later James Bond adventure titled “Tomorrow Never Dies.”

“True Lies.” A James Cameron epic, this mid-90s Hollywood blockbuster starred Arnold Schwarzenegger, Jamie Lee Curtis, Bill Paxton and Tom Arnold. Featuring action sequences of helicopter stunts, a warehouse explosion and a bridge blast, parts of the movie were filmed on sets constructed on Sugarloaf Key to replicate the iconic Seven Mile Bridge. Additional scenes were filmed in the cities of Marathon and Key West. For visitors road-tripping the Keys, it’s a must to drive the Overseas Highway and cross the real Seven Mile Bridge.

“Red Dragon.” Scenes from the 2002 epic, starring Anthony Hopkins as the twisted Hannibal “The Cannibal” Lecter, were filmed next to Islamorada’s popular Islander Resort at a resident doctor’s home. 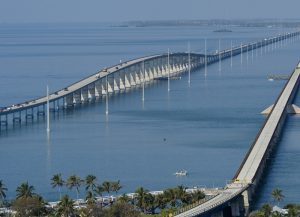 “2 Fast 2 Furious.” Featuring Eva Mendes, Ludacris and the late Paul Walker, this action-packed movie was also filmed in part in the Florida Keys, opting like many others to shoot adrenaline-pumping scenes on the Seven Mile Bridge.

Of course, many other films also feature scenes shot in the Keys — including “The Leisure Seeker” with Donald Sutherland and Helen Mirren, and “The Laundromat” with Meryl Streep, Gary Oldman, Antonio Banderas and Sharon Stone. For a list of must-watch productions with an island chain connection, click here.