History fans who visit Key West’s Harry S. Truman Little White House, Florida’s only presidential museum, can do more than explore the home where Truman spent nearly six months of his 1945-1953 presidency. They can also choose to ride around the island city in a limousine he used during his term in office. 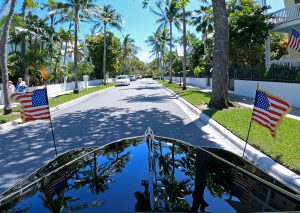 This photo shows the view out the front windshield of the presidential limousine as it rolls down a Key West street. (Photo by Steve Panariello, Florida Keys News Bureau)

Yes, an actual presidential limo — a vintage Lincoln Cosmopolitan, whose black paint gleams so brightly that it reflects the two American flags flying proudly above its front fenders. And it’s complete with an intercom system, a hydraulic privacy shield and plenty of security elements. (There’s no AC, but it features an airflow controller to ensure passengers’ comfort.)

And there is literally no other experience like sitting in it, where Harry Truman himself once sat, being chauffeured through the Key West streets once traveled by America’s 33rd president.

“This limo is one of nine that were situated at different cities throughout the United States for use by the president when he would travel to different locations — because back in that period, the presidential limousine did not travel on the presidential plane,” said Clinton Curry, director of operations for the Little White House.

Truman first visited Key West when his doctor ordered rest to fight a bad cold. Entranced by the island, he quickly adopted the one-time commander’s quarters on the Key West naval station as his “Little White House.”

In fact, he felt so comfortable in Key West, away from the pressures of Washington D.C., that he kept coming back. During his island sojourns, he spent time taking brisk morning walks, playing poker, swimming and fishing. He even adopted the locals’ casual dress code, favoring tropical shirts and slacks on many occasions. 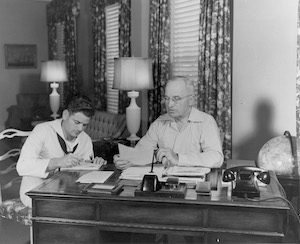 Today, visitors to the house can tour airy, comfortable rooms that have been carefully restored to their Truman-era appearance, and listen to guides tell tales of Truman’s presidency and Key West sojourns.

Actually, some 90 percent of the current furnishings also graced the property during the former president’s era. The Little White House showcases authentic artifacts include Truman’s handmade poker table, one of his beloved tropical shirts and the desk where he carried out his official duties.

Despite the house’s easygoing atmosphere, Truman made some of the most important decisions of his presidency from his island retreat. Historians believe he decided to adopt the Marshall Plan to aid postwar Europe while he was in Key West — as well as deciding to relieve General Douglas MacArthur of his command, and to forego running for reelection.

But what about that limousine?

Little White House visitors can indeed ride in it. Not just any visitor, however. In addition to regular tours of the place, the museum recently debuted an exclusive White Glove Tour for small groups — and the once-in-a-lifetime presidential limo ride is a highlight of the new tour. 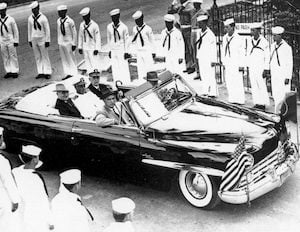 President Truman is flanked by a U.S. Navy guard as he rides in a convertible limo in Key West. (Photo courtesy of the Little White House Museum.

Led by guide Zabrina Adorno, who has a remarkable knowledge of Truman history and lore, they even put on white gloves to handle presidential belongings — including Truman’s prized whiskey jigger.

And then, after immersing themselves in the former president’s Key West life, they step inside the elegant black limo, settle into the soft gray upholstery where Truman and his fellow dignitaries once sat, and are chauffeured around the picturesque streets of the island’s historic Old Town.