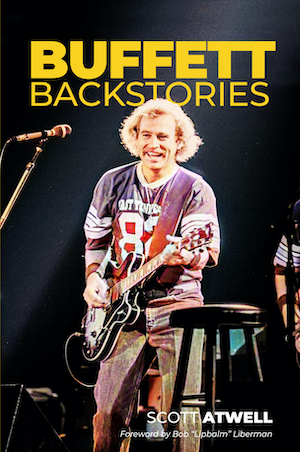 “Buffett Backstories,” recently debuted by Scott Atwell, is a must-read for fans of Jimmy Buffett and the island that inspired so much of his music.

Not long afterward, Jimmy returned and settled in — and began writing songs that not only energized his musical career, but came to define it. Along the way, he inspired millions of people to share his love for the easygoing subtropical island.

As well as being Jimmy’s home during some of his most productive years, Key West — and its people, laid-back lifestyle and cheerfully outlaw vibe — became the subject of some of his most enduring tunes.

Scott, a seasoned broadcaster and PR specialist, got the idea for the book while hosting an all-Buffett weekly radio program on a local FM station. Each week, the program featured an in-depth exploration of the origin of one of Jimmy’s songs — often accompanied by interviews with people who had inspired or witnessed the tunes’ creation.

“As the stories gathered,” Scott wrote in the book’s preface, “it soon occurred to me that I would have collected fifty backstories by the time we were celebrating the fiftieth anniversary of Buffett’s first visit to my hometown.”

The book does indeed feature the history behind fifty songs. Because of Jimmy’s fondness for Key West as a subject, many of them involve his experiences, adventures and “partners in crime” on the renegade island of the 1970s and early 80s. And in chronicling the songs’ genesis, Scott paints a vivid picture of an unforgettable place and time. 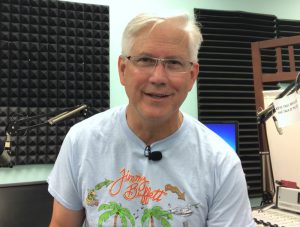 Author Scott Atwell, a Key West native, got the idea for his book while hosting a weekly all-Buffett radio show on local station Party 105.7.

Jimmy’s lyrics are rich in references to Key West spots such as Fausto’s Food Palace and the Chart Room Bar. His songs memorialize Key West characters like the late Captain Tony Tarracino, a colorful former mayor featured in “Last Mango in Paris,” and the late Phil Clark, whose real-life exploits unfold in “A Pirate Looks at 40.”

All find their way into the pages of “Buffett Backstories” — as do mentions of Key West’s hardscrabble shrimping industry, long-ago square dance club called the Nautical Wheelers, and the role the Old Seven Mile Bridge (the centerpiece of the Florida Keys Overseas Highway) played in the writing of Jimmy’s biggest hit, “Margaritaville.”

Fittingly, in the mid-1980s Jimmy founded the Margaritaville Store in the island’s funky waterfront enclave of Lands End Village. A Mecca for his fans, the store is now located beside his original Margaritaville Café on Duval Street. His unmarked yet renowned recording studio, Shrimp Boat Sound, overlooks the former shrimp docks. 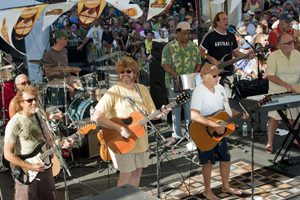 Today, though Jimmy’s brand has expanded far beyond stores and cafés, Key West remains the geographical focus of the “Margaritaville mystique” embraced by his fans.

And there’s no better way to celebrate the 50th anniversary of his arrival in the island city than by delving into “Buffett Backstories.”

Engaging and well-written, with an undeniably authentic tone, the book features a foreword by Jimmy’s longtime tour manager, Bob Liberman. It also contains a guide to some of the Key West sites that had meaning in his musical history.

So pick up a copy, grab a cold one and start reading — because “Buffett Backstories” is a world-class treat for fans of Jimmy Buffett and the island that became his inspiration.