Four ‘COOL’ Things to Do This Summer in Key West 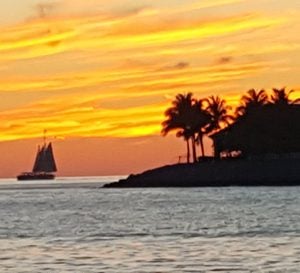 Key West is famed for its amazing weather, warm winters and plenty of ways to “chill” if the summer sun ever feels too hot. (Photo by Greg Tromba, Florida Keys News Bureau)

However, I’m often surprised that some non-residents assume our summer temps rival most cities to our north. Instead, to our delight, summer temperatures in the Florida Keys rarely surpass the low 90s and still include our lovely island breezes.

But if you ever find yourself getting a bit overheated, you’re never too far from one of our picturesque island beaches, retail stores, restaurants/bars, museums and art galleries that always keep their A.C. cranking. Here some of my favorite ways to “keep cool” during the dog days of summer.

One: Spend the day chilling at a poolside tiki bar.

The Bourbon Street Entertainment Complex at 724 Duval St. includes a male-only guest house called New Orleans House. The property has a full-service tiki bar, Jacuzzi, pool and two sundecks (check out the very top deck for wonderful views of Key West). All of these amenities are available to males 18 years old and older — free of charge — seven days a week.

The pool is delightfully refreshing due to its waterfall that maintains water temps perfect for cooling down on sultry summer days. The venue also offers several shaded loungers and areas to bask in our ocean breezes.

Two: History can be cool too, especially while enjoying some A.C.

Key West has an incredible history featuring shipwreck treasures and artifacts, artists, some very notable eccentrics, a cigar-making heyday and a vibrant past as a bustling seaport. Key West museums have done a great job of making sure that our cultural and historical richness is preserved, spotlighted and celebrated throughout the island. 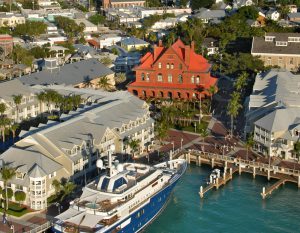 One of my favorites is the Key West  Museum of Art & History housed in the majestic red-brick Custom House (opened in 1891), which towers over the Key West Harbor and is one of the best-preserved examples of Richardsonian Romanesque architecture in the entire U.S.

Located at 281 Front St., it offers two floors of exhibitions and showcases 200 years of historical events, art and individuals who helped shape the Florida Keys.

The Hemingway Rum Company, which is operated by some of Ernest Hemingway’s direct descendants, offers fascinating distillery tours and delicious samples along the way. If you’re lucky, you may even be able to taste a fresh “batch of the day.”

The flavorful rum was named after Hemingway’s beloved boat, the Pilar, a vessel that launched many of the literary giant’s life adventures. I highly recommend trying the Hemingway Daiquiri or the Rum Swizzle (followed by an Uber if you’re tempted to have more than one). Located at 201 Simonton St., the venue is open seven days a week — and by the way, the Hemingway family donates a majority of Papa’s Pilar rum profits to charity (very apropos for Key West).

Four: After sampling some of Papa’s rum, visit the iconic author’s home. 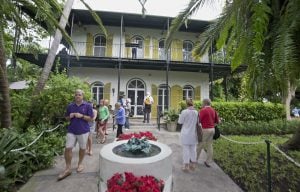 In 1928 Ernest Hemingway arrived in Key West aboard a ferry from Havana. He had planned to pick up a car and then quickly make his way north.  However, the automobile that should have been waiting at the docks was delayed, so the seller offered the famed writer temporary accommodations while he waited for its arrival.

Not long after that, Hemingway became captivated with the island and moved into a Spanish colonial villa at 907 Whitehead St., which was his residence through December 1939. Now a registered National Historic Landmark, the home is a museum honoring the author who established Key West as a literary haven.

Guided tours of the historic Hemingway home (with the comforts of modern A.C.) are currently offered daily. Visitors can view the author’s writing studio, explore the grounds and befriend the property’s playful clan of six-toed cats — descended, so legend has it, from a sea captain’s feline given to Hemingway.