Dining outdoors with a view of the picturesque sunset is a signature Florida Keys experience — enjoyed by countless visitors to the subtropical destination. One of the choice places to enjoy it is Islamorada’s Morada Bay Keys Beach Café & Bar at mile marker 81.6, an outdoor Mediterranean bistro café in the sand that’s known for spectacular sunset views.

Islamorada, by the way, is renowned as the Sport-Fishing Capital of the World, because it’s the place where backcountry sport fishing and saltwater fly fishing were pioneered.

Artists and creative spirits also love the place. Islamorada is home to the Morada Way Arts and Cultural District, spotlighting the art galleries and restaurants at Morada Way between mile markers 81 and 82.

As well as welcoming visitors throughout the year, the popular arts district is the site of Third Thursday Art Walks that feature fine art, live music and culinary offerings.

One of the area’s acknowledged culinary hotspots, of course, is Morada Bay. Set on a beautiful palm-lined beach beside the waters of Florida Bay, the restaurant offers indoor and outdoor bars and dining areas. Tropically landscaped walking paths wind through the property.

Morada Bay also has a unique history within the Florida Keys. Eagle-eyed viewers might realize that both the Beach Café and neighboring restaurant Pierre’s were prominently featured in the hit Netflix series “Bloodline” that was filmed in the Upper Keys.

(Those interested in “Bloodline,” a complex multi-season drama exploring the lives of the dysfunctional Rayburn family, might want to check out the two-book series  “A Local’s Guide to Bloodline” penned by Keys authors Brad Bertelli and David Sloan. Fans of the series will discover spots ranging from the Rayburn mansion to the site of Danny Rayburn’s murder.) 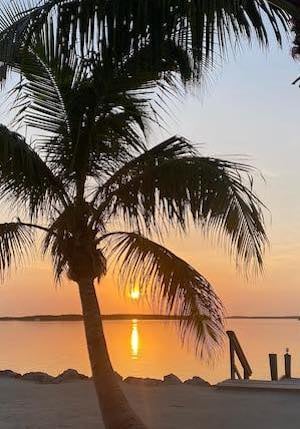 A vivid, tranquil Morada Bay sunset is the perfect accompaniment to a Keys meal.

At Morada Bay, Chef Joseph Wiktorek is the guiding spirit behind the popular menu, which blends Caribbean- and American-style cuisine with an emphasis on fresh local seafood and produce.

Chef Joseph began his culinary career at the age of 22 when another chef took him under his wing and taught him everything he knew.

With no formal culinary school training, he has quickly become a master of ingredient-driven cooking, and applies those ideals to the menu at Morada Bay and its sister restaurant, Pierre’s.

When Chef Joseph isn’t in the restaurant kitchen, he can be found at one of the many other restaurants in the Florida Keys. He admits, however, that he’s “not the boss at home” and it’s up to his daughters where they go out to eat.

What are the chef’s personal thoughts on what to see and do in the Florida Keys?

“Support local businesses like restaurants, fishing charters and others,” he advised. “But be safe. Wear a mask. Wash your hands. Follow social distancing guidelines. And when you come back from that fishing charter, bring your catch to Morada Bay and we’ll cook it up right for you!”