Do You Belong in the Keys?

Let’s face it — there are some people who simply belong in the Florida Keys. Take me, for example. I was a naïve 20-year-old Minnesota girl when I first arrived in the island chain, enjoying a break from college and fleeing a sub-zero February. 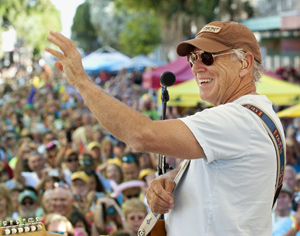 I had only seen the ocean once before, and evergreens were a far more familiar sight than palm trees. Yet after just 48 hours in the Keys, I called my mother and told her to send my belongings — I had found my home and, mercifully, was smart enough to recognize the fact.

My story is absolutely not unique. Again and again, you’ll hear variations on the same theme. People come down for a vacation, a temporary job, a visit with an island-dwelling friend — and become mesmerized by some indefinable magic about the Keys that makes them unwilling or unable to leave.

So how can you tell if you’re among the lucky few that belong in the island chain?

After several decades of living here, I can offer a few tips. And if more than three or four of the following apply to you, you might as well start considering relocation — because sooner or later, that magic will sneak up on you and you’ll be powerless to resist.

ONE: You know all the words to at least four Jimmy Buffett songs and at least two by Howard Livingston. Buffett, the Keys’ “pirate laureate,” took inspiration for anthems like “Margaritaville” from his Key West days in the 70s and early 80s. And Howard, a Lower Keys resident whose Mile Marker 24 Band is a trop rock favorite, penned the equally meaningful “Blame it on the Margaritas.”

TWO: You have a strange urge to celebrate the nightly setting of the sun. In Key West, the nightly sunset is an excuse for a combination carnival and street party at Mallory Square overlooking the harbor. With lively street performers and vendors selling creative handmade wares, it’s a happening that just shouldn’t be missed. 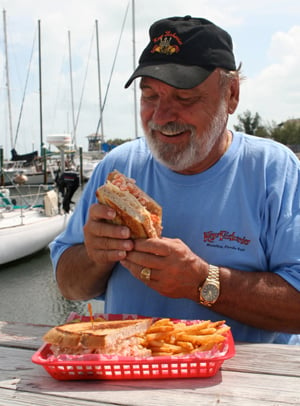 THREE: You can actually make a sound when blowing through a conch shell. Blowing the conch “horn” is a Keys tradition that dates back to the shipwreck salvagers of the early 1800s (or even earlier). Today, there’s an annual conch shell blowing contest in Key West — and on one memorable day, a group of Key Largo denizens attempted to break a world record for the largest number of people “conch honking” simultaneously.

FOUR: You’ve met Captain Tony. Or Captain Finbar. Or Captain Richard Stanczyk. Or all three of them. All three Keys icons are renowned for their storytelling as well as their other talents. The late Tony was the owner of Key West’s legendary Captain Tony’s Saloon, while Finbar skippers the majestic Schooner Wolf and reigns as the First Sea Lord of the picturesque Conch Republic Navy. And Islamorada’s Richard Stanczyk, guiding spirit behind Bud N’ Mary’s Marina, is world-renowned as one of the pioneers of daytime swordfishing.

FIVE: You’ve eaten a Lobster Reuben at Keys Fisheries, hogfish at the Hogfish and breakfast with the roosters at Blue Heaven. Once you’ve sampled the renowned Lobster Reuben at Marathon’s waterfront Keys Fisheries, you’ll never crave a corned-beef Reuben again. Hogfish, caught primarily by divers, is a light white fish best enjoyed at its namesake eatery on Stock Island. And Blue Heaven’s breakfasts? Savored in an open-air Key West courtyard while semi-tame chickens scurry nearby, they’re simply beyond compare.

SIX: Every time you arrive in the Keys, your everyday stresses seem a little less important and you find yourself smiling. Need I say more? If this is true in your case, you might as well start packing … because the chances are awfully good that you, like me, simply belong here.