That fact was amply proved in Key West on the night before the 120th anniversary of Hemingway’s birth — when the 68-year-old white-bearded retired banker won the Hemingway Look-Alike Contest. 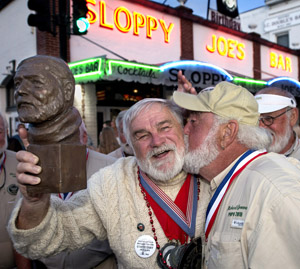 It was the Tennessee man’s eighth try for the title of “Papa,” and it wasn’t an easy victory. Hemingway hopefuls in sportsman’s attire or thick fisherman’s sweaters paraded before a judging panel of former winners at Sloppy Joe’s Bar, a watering hole frequented by the late author.

As crowds cheered for their favorites, several entrants performed song parodies designed to demonstrate their worthiness to win. Contestant David “Bat” Masterson even tootled part of the 1958 hit “Tequila” on a fluted, pink-lined conch shell, inspiring audience members to roar out the refrain at appropriate intervals.

But ultimately, after two preliminary rounds and the hard-fought finals, Joe triumphed over 141 other entrants. And that made sense — because with his stocky build, rugged face and eyes that seem to peer into far distances, he could practically be Hemingway’s twin.

He admits he’s not a fisherman like the author, who pursued deep-sea gamefish in the waters between Key West and Cuba. In fact, his lack of angling prowess earned some good-natured teasing from fellow look-alikes.

That’s okay, though, because Joe shares a couple of other traits with the writer.

“The one thing I have in common with Hemingway is I love mojitos. And I love women, too,” he added with a roguish grin.

Ernest Hemingway lived and wrote in Key West during most of the 1930s, seemingly fascinated by the island’s renegade atmosphere and colorful characters. As well as fishing, his favorite activities included refereeing boxing matches in the Bahama Village district, sparring with young fighters including the late Kermit “Shine” Forbes, and meeting friends for drinks and lively discussions at Sloppy Joe’s. 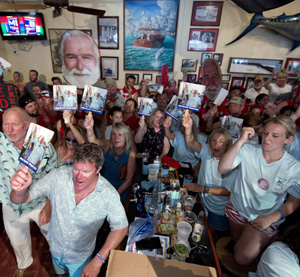 Fans of Hemingway Look-Alike Contest entrant Jon Auvil cheer for him during the 2019 competition at Sloppy Joe’s Bar. The competition highlighted the yearly Hemingway Days celebration.

During his time on the island, Hemingway wrote many of this best-known works including “Death in the Afternoon,” “For Whom the Bell Tolls,” “The Green Hills of Africa,” “The Snows of Kilimanjaro” and “The Short Happy Life of Francis Macomber.” He chose Depression-era Key West as the setting for his brilliant “To Have and Have Not” — his only novel with an American locale.

“I love his writing,” said Joe. “He was a great writer, and just to be part of this history of Hemingway is incredible.”

The look-alike contest is an undisputed highlight of Key West’s Hemingway Days, an annual salute to the adventurous lifestyle and literary talent of the island’s most famous resident. For Joe, however, as for most repeat competitors, the camaraderie is as important as the contest itself.

Aspiring “Papas” return year after year with wives or girlfriends, and often many other friends and family members, to be part of the bearded brotherhood whose closeness runs deep. In 1997 they formally established the Hemingway Look-Alike Society, and they all work tirelessly to raise money for a scholarship fund that benefits Florida Keys students.

Joe Maxey credited his win mostly to persistence, a love for the organization and the “family” he has found among the look-alikes.

Thanks to the newest “Papa,” and to everyone else who participated in the contests or celebrated Hemingway Days, Ernest Hemingway’s legacy is alive and thriving on the island he loved.