Despite his imposing titles (which also include admiral of the Conch Republic forces), the roguish seafarer is simply called “Finbar” by most people who know him.

Growing up on Miami Beach, he first came to Key West as a child with his parents to take the then-operating ferry to Havana to visit relatives. Always fascinated by the sea, he sailed into Key West for good in 1973.

“Key West was a very different place in those days,” he said, recalling an era dominated by commercial fishing, a navy base and illicit marijuana importation. “Seafaring was everything, but there were no passenger sailboats — so I jumped in to fill the gap.”

In 1980 he built the 33-foot sloop High Tide, designed for day sailing and trips to the nearby coral reef. Two years later, he began building the 74-foot topsail Schooner Wolf that has been his passion — and his frequent live-aboard home — ever since.

“The Wolf was designed to be a traditionally rigged schooner, the type common in the 19th century,” explained Finbar. “I’ve always loved traditional ships. To me, the old ways are sometimes the best ways, and it was a tradition worth carrying on.”

The Schooner Wolf has been headquartered in Key West and neighboring Stock Island for some 35 years. As well as operating as a passenger boat, offering everything from specialty day sails to private charters and extended voyages, the classic schooner has appeared in films and at tall ship festivals around the U.S. and Caribbean. 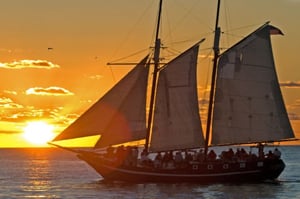 Finbar’s beloved Schooner Wolf is a majestic sight against the setting sun.

The Wolf also is renowned for humanitarian relief sails — missions inspired by a personal experience that Finbar will never forget.

In 1980 the steadfast captain survived a deadly Caribbean hurricane at sea, spending three harrowing days in a tiny life raft after the ship he was piloting sank. He and his wife Julie McEnroe have since led the Wolf’s crew on missions of mercy after hurricanes and other natural disasters, carrying cargoes of relief supplies to survivors in stricken Caribbean regions.

“People keep asking me why we’re doing this, and my answer is simple,” said Finbar in 2010 before one of the missions. “We’re islanders, and we need to take care of our fellow islanders.”

As a Key West islander, Finbar has embraced activities that include portraying a pirate king at local festivals coordinated by Julie (who he fondly calls “Blossom”) and serving in the lively Conch Republic Military.

In 1985, the Wolf was designated the flagship of the republic — a symbolic “independent nation” recognized around the world as the Florida Keys’ colorful alter ego. Supreme Commander Finbar leads the navy’s lighthearted sea battle against “federal invaders” each April during the Conch Republic Independence Celebration. 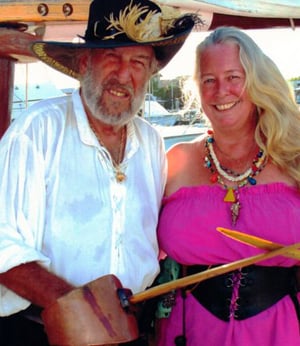 Finbar and his wife Julie are known for piratical escapades — and their many humanitarian voyages on the Wolf.

In all the roles he takes on, the captain is driven by a devil-may-care enthusiasm and a profound affection for the ocean and his Key West life.

“I love being at sea, but I also love being home on my island,” he said. “I’ve been to many ports and none of them have the way of life I love here.”

He’s also passionate about teaching others the ancient art of sail.

“I want to pass on what I know to younger sailors, and try to show them — as best I can — the spirit of the sea,” said Finbar.

That spirit, and Finbar’s own dynamic spirit, are spotlighted in a captivating documentary film recently released by Matt Dean Films. “The Old Man and the Sea: Return to Cuba” explores Finbar’s seafaring life and first journey to Havana since his childhood.

Yet no matter where the sea might take him, the incomparable captain has no intention of abandoning the island that has been his home port since 1973.

“Key West is one of the places in the world where you can be yourself,” he said. “I am the ancient mariner, and this is where I belong.”