An Officer and a Bar Owner: Cycling the Keys

Just how did two former collegiate wrestlers — a one-time cop from Louisiana and a bar owner from Ohio — become partners in a Florida Keys cycling tour company? 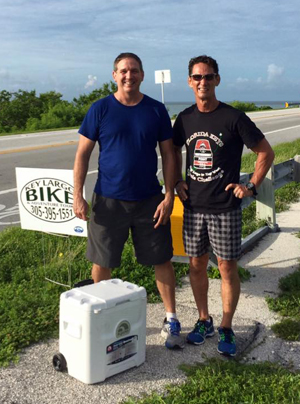 Patrick Fitzgerald (left) and Mark Terrill (right) were both avid cyclists before turning their favorite sport into a business. (Photo by Terri Armstrong)

Mark Terrill, a state agency investigator living in Islamorada, and Patrick Fitzgerald, a former bar owner living in Tavernier, founded Key Largo Bike and Adventure Tours about seven years ago after being introduced by a mutual friend. And the seemingly unusual pairing has worked ever since.

“Key Largo is the gateway to the Keys and the perfect starting spot to ride 100 miles to Key West,” Mark said. “Normally the winds are in the cyclist’s favor, riding from Key Largo to Key West. Everyone wants to end their bike ride in Key West.”

Key Largo Bike, with 60 bikes ranging from hybrids to road bikes, is located in Tavernier along Old Highway.

“I originally wanted to do this business part-time,” Mark admitted. “The demand became overwhelming.”

Last fall, he took a job as an investigator for the Florida Department of Business and Professional Regulation. He has also been a Monroe County sheriff’s detective as well as an officer in Miami and Los Angeles.

“I came to the Keys in 1994 after working as an LAPD officer for five years,” Mark said. “I wanted to raise my kids in the Keys.”

Key Largo Bike tours are popular among middle-aged cyclists, empty nesters and visitors who often ride 30 to 40 miles at home. Typically, the Keys are on clients’ bucket lists. 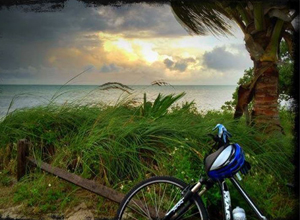 Clients enjoy the natural beauty of the Florida Keys as much as they enjoy their cycling adventures. (Photo courtesy of Key Largo Bike and Adventure Tours)

“We’re the only company that specializes in covering the entire Keys,” Patrick said.

Popular tours include the Two-Day Tour to Key West, two 100-mile (also called “century”) journeys that include the Florida Keys and Hemingway Century rides, an Islamorada Bike Tour, Bike and Beer Tour and Taste of the Keys.

“We do get those serious road bikers, those who like to do a century in one day,” Patrick said.

Riding the Seven Mile Bridge is a trip highlight.

The newest tour, Taste of the Keys, includes stops at beaches, coffee shops, art galleries and microbreweries around Islamorada, followed by selected bridges and hidden trails along the way to Key West. The excursion enables cyclists to experience 100 miles of the Keys without riding the full trip. 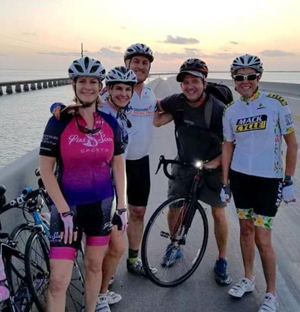 “So if you like to cycle a little, walk a little, swim a little and enjoy life a lot, this is the perfect tour for you,” a description states.

The four-hour Bike and Beer Tour, with 24 miles of riding, includes a guide and three beers. (After the third beer stop, a vehicle ride back to Tavernier is recommended.)

Mark and his wife Allison have been married 31 years with three grown children: Jessica, who works for Miami’s Jungle Island; Luke, stationed in England with the Air Force; and Joel, an insurance agent in Hollywood Beach, Florida.

“I forced them all to cycle and now they love it,” Mark said.

For both men, giving back to the Keys is a reward.

“I enjoy helping people,” Mark said. “I find that being a bike tour operator and a public servant have something in common.”