Eco-tourism in the Florida Keys

"Everybody needs beauty as well as bread, places to play in and pray in, where nature may heal and give strength to body and soul alike." — John Muir, naturalist 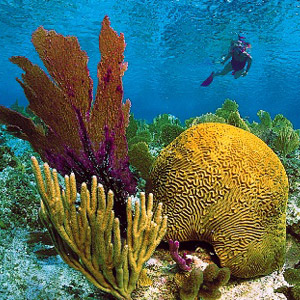 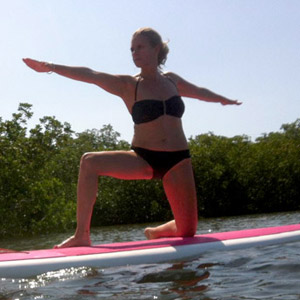 Not that long ago, the wild wonders of the Florida Keys were something most visitors experienced almost by accident. On the way out to catch a sailfish, a fisherman might spot the angular silhouette of a frigate bird hovering overhead. Or, the captain would point to a pod of dolphins playing in front of the bow. Maybe a school of dark shadows would glide gracefully over a patch of white sand, as spotted eagle rays often will.

Today, more and more visitors are stepping, paddling or snorkeling through the Keys specifically to see these and many other sights. Preservation is a priority in the Keys. A local non-profit group, Reef Relief, is working to protect our nearshore waters and offshore coral formations for eco-tourists, divers and snorkelers. 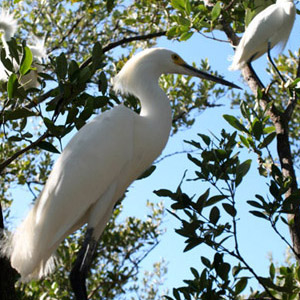 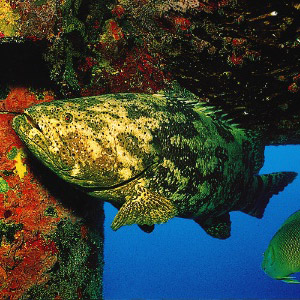 The interest in eco-tours should not be surprising. From Key Largo to Key West, natural tidal creeks meander through easily accessible mangrove forests. Green herons hop among the roots, and mysterious splashing sounds echo from deep within the watery forests. The luckiest paddlers might even spot a 200-pound goliath grouper lolling lazily in the crystal-clear creek. Out in the open water, a huge loggerhead sea turtle pokes its head out of the water, and a 4-foot lemon shark swaggers along the edge of an uninhabited key looking for a meal.

Back on dry land, nature trails lead hikers among the same tropical plants and hardwood trees that Native Americans called home. Meanwhile, birders stalk the edges of the woods looking for the elusive mangrove cuckoo. They find flocks of white-crowned pigeons, a bird they will see nowhere else in North America.

For a few days or weeks, these eco-tourists have experienced nature in the quiet way that was once reserved for poets, philosophers and naturalists like Muir. Our site is designed to help you plan just such an eco-tour of your own anywhere in the Keys. 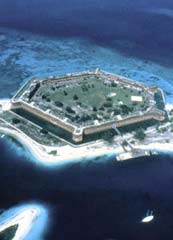 Key West is the gateway to a vast ecotourism playground extending 70 miles westward to the uninhabited sand spits and coral formations of Dry Tortugas National Park. If you want to stay relatively close to the island, you can take a catamaran sailboat tour into the shallow waters and uninhabited keys that frame the island's famous sunsets. Locals call this area The Lakes, and once there, you can hop onto a kayak and paddle over patch coral formations or along mangrove fringes. You can even don a snorkel and mask and study the fish, grasses and soft corals. Some tours will take you all the way to Boca Grande Key, an uninhabited island favored by locals for its white sandy shoreline and beautiful coral patch reef. Other tour operators will take you in the opposite direction to the mangrove backcountry northeast of Key West.

If you prefer, you can sign up for a bird's eye view of the watery wilderness collectively known as West of Key West. Small seaplanes leave several times a day from Key West International Airport for historic Fort Jefferson, a Civil War-era fortress in the Dry Tortugas.

Your pilot will buzz along at an altitude of just 500 feet while watching for dolphins, sharks, spotted eagle rays, or tarpon. He'll even roll the plane to the side so you can see better. You'll cross the ring of islands called the Marquesas Keys, and then the Quicksands, a region of underwater sand dunes where treasure hunter Mel Fisher and his family discovered the riches of the Spanish galleon Atocha.

If flying is not your preference, you can visit the Dry Tortugas via high-speed ferry, charter boat or catamaran. The trip is longer but the crew knows how to show you a good time. Once at the fort, you can camp overnight on its small beach, or snorkel for just a little while among the nearby corals.

Spend time in the wilderness surrounding Key West, and you're bound to go home with a story to tell.

Beyond the Seven Mile Bridge, the islands suddenly take a westerly turn toward the sunset. And starting at Big Pine Key, there is suddenly more land than sea. For centuries, powerful tides have whipped back and forth between the islands of the Lower Keys. This action has formed a ring of tiny uninhabited mangrove islands and shallow grass flats to the north of the main islands. Welcome to the fabled Lower Keys backcountry, home to the glistening waters of the Content Keys and Snipe Point.

At Big Pine Key or Sugarloaf Key, you can rent kayaks and explore portions of the backcountry on your own or sign up for a variety of guided tours. If you feel like taking a drive, you might head up the Keys to Bahia Honda State Park, where huge barracuda cruise through the sandy shallows.

Launch your kayak or canoe at Bahia Honda State Park and walk slowly through the calf-deep shallows. With any luck, you'll spot a four-foot barracuda scouting the white sand for a careless needle fish. You might even see a school of bonefish rooting for crabs.

Out in the Lower Keys backcountry, it's not uncommon to spot a pod of dolphins feeding in water seemingly much too shallow for them. Paddle along the edges of the uninhabited mangroves and you are almost sure to see egrets, herons, kingfishers and white-crowned pigeons among other migratory and shallow-water bird life. On the Atlantic side, the mangrove-lined Coupon Bight is a popular kayaking destination at Big Pine Key. Experienced sea kayakers or those on popular guided tours can venture into the open ocean to snorkel over patch reefs at any of the Lower Keys.

But you don't have to take to the water to have an ecotour in the Lower Keys. Big Pine Key is famous for its pines and the diminutive version of the white tail deer that has evolved among them. Park along one of the roads passing through the National Key Deer Refuge and you are almost certain to see one of these deer. Please don't feed or pet them. Managers want to keep the Key Deer as wild as the Lower Keys backcountry itself.

Marathon is situated at the midpoint of the Keys island chain, surrounded by numerous large shoals and shallow-water coral humps, some within just two miles of shore. These coral patches are magnets for beautiful sea life from sea turtles to tiny tropical fish. Kayakers of various experience levels can paddle to some of these offshore areas and a few uninhabited mangrove islands on calm days, and tours around the island and through mangrove forests that dot the shallow flats are available with the help of a guide. Watch sharks, tarpon, bonefish or other flats species cruise the shallows, and egrets and herons snatch tiny fish.

In May and June, thousands of huge tarpon roll and shimmer in the natural channels passing under the famous Seven-Mile-Bridge. Terns and ruddy turnstones work the shoreline looking for food while above you hovers the black shape of a frigate bird.

If you want a break from the water, consider a hike through the 64-acre Crane Point Hammock which is not far from the center of Marathon. A hammock is a raised patch land with just enough soil on it to support an amazing variety of plant life, including tropical hardwood trees, the hallmark of Crane Point. White crowned pigeons, raccoons, ibis, herons, clouds of dragonflies and butterflies are regular residents along the two miles of trails. Archeological evidence shows that Indians and prehistoric Indians called this place home.

Islamorada is a gateway to one of the most varied watery wildernesses in America, and a playground for anyone interested in the environment, wildlife, and history. Climb onto an ecotour boat and head northwest into the fabled backcountry, a world of vast sea-grass beds and shallow tidal flats. Offshore waters are shared by marine life, tropical fish, dolphins, manatees, crocodiles and roseate spoonbills.

Some tour operators offer excursions further to Flamingo, a national park outpost situated where the Everglades spill into Florida Bay in Everglades National Park. Tours, kayaks and canoe rentals are easily accessible from marinas, resorts, and parks along U.S. 1, the Overseas Highway, all available for rent or you can hire a tour guide to accompany you. Tiny Lignumvitae Key, home to Lignumvitae State Park and Botanical Site, is a fascinating stop for paddlers or boaters who want to stroll through a tropical forest thriving atop the remains of an ancient coral reef. The island bearing its name lies just a mile from U.S. 1 on the bay side. This raised patch of land, called a hammock, tops out at just 18-feet above sea level yet it is the highest point in the Keys. That might be why early 2Oth century settlers called it home. Today, you can still visit the Matheson House, built in 1919.

Indian Key on the Atlantic Ocean side of Islamorada is another site reachable only by private boat or tour. To walk on this island is to walk where Native Americans walked for thousands of years. In the 1830s, a Staten Island businessman set up an outpost here to salvage cargo from ships stranded on the nearby reef. Success was short lived for the settlers. In the early morning of August 7, 1840, a band of Indians attacked them. Some settlers survived by hiding in a turtle kraal, a pen used to raise sea turtles for food. Today, the island is home to Indian Key State Historic Site.

The waters around Key Largo are an ecologically fascinating place where freshwater from the Everglades mixes with the saltwater of Florida Bay. Everglades National Park abuts the near-shore waters of Key Largo to the west. An array of wildlife awaits within easy reach of the dock, including bottle-nosed dolphin, crocodiles, sea turtles, alligators, and manatees. Highly skilled boat captains and eco-tour outfitters are ready to show them to you. Heron Dusenberry Creek and its many winding tributaries are a popular spot for full or half-day kayaking and canoe trips. Old-growth mangrove trees form a jungle canopy overhead as you make your way through the tiny creeks. If you're lucky, you will see a manatee, which are regular visitors, especially during the winter months.

Extended kayak and canoe trips also are available for those who enjoy wilderness camping, such as seven-day paddling trips from Flamingo, a national park outpost where the Everglades meets the sea, to Everglades City on Florida's west coast.

Boat operators introduce you to the wildlife and wilderness, including an air-boat ride through the grassy interior of the Everglades, less than an hour's drive away, or arrange a visit to Crocodile Lake National Wildlife Refuge, a tidal lake that is a nesting area for crocodiles. View the crocs from a safe distance.

Be sure to visit Key Largo's five-acre Florida Keys Wild Bird Center with a display of native and migratory birds that have been nursed back to health but can't be released into the wild. Wooden walkways also take visitors over samplings of Key Largo's varied habitat. You will learn that six inches of elevation make a huge difference in the types of plants and animals one finds in the Keys.