UPDATE: The Nest Has Hatched!

Friday, July 25, 2014, the loggerhead sea turtle hatchlings made their way from the nest to the ocean's edge just before 9 PM.

Using infrared lighting, a live-streaming, high-definition "turtle webcam" positioned on a beach in the Florida Keys recorded the hatch. The camera uses infrared lighting so hatchlings won't be confused by artificial light and will go to sea — guided by moonlight reflecting on the water — instead of pushing further onto land.

The webcam is part of ongoing efforts in the Florida Keys to raise awareness of sea turtles and the need to protect them. 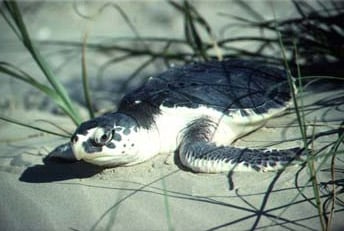 Loggerhead, green, leatherback, hawksbill and Kemp's ridley sea turtles nest on beaches in the Florida Keys and other parts of Florida, or inhabit Florida and Keys waters. All five species are considered either threatened or endangered.

From mid-April through October each year, these turtles crawl ashore at night to dig their nests and lay eggs. A female turtle typically lays about 100 eggs and covers them with sand before returning to the water, leaving the nest alone. 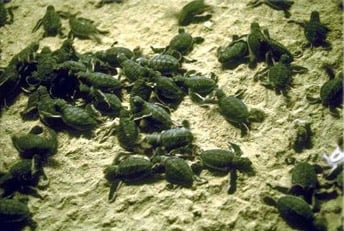 Approximately two months later, the hatchlings struggle free of the nest and rush toward the sea, guided by moonlight reflecting off open water.

Any artificial light, including flashlights and flash cameras, can disturb and disorient the turtles, interrupting the natural process. Laws prohibit people from touching or disturbing hatchlings, nests and nesting turtles.

Images of a Turtle Nest Excavation Permitted beach surveyors excavated and found 84 eggs in the nest. A live hatchling was discovered and released. A live hatchling makes his way to the sea. After a few breaths of air, the hatchling dipped beneath the surface and paddled to sea.

Protecting Turtles for Future Generations in the Florida Keys

Florida Keys organizations have been working for decades to raise awareness of sea turtles and their needs.

For example, the Save-a-Turtle organization, formed in 1985, focuses on the protection of rare and endangered marine turtles, their nesting grounds and their habitat.

Since 1986, sea turtles have been cared for in the Keys through the efforts of Marathon's Turtle Hospital, where a dedicated team runs the world's only certified hospital of its kind.

Turtles with a variety of injuries and ailments are brought to the hospital for treatment, rehabilitation and release to the wild. If a release isn't possible, the creatures become permanent residents. Educational tours of the facility are offered to introduce visitors to the resident sea turtles and to the hospital's curative programs for loggerhead, green, hawksbill and Kemp's ridley turtles. 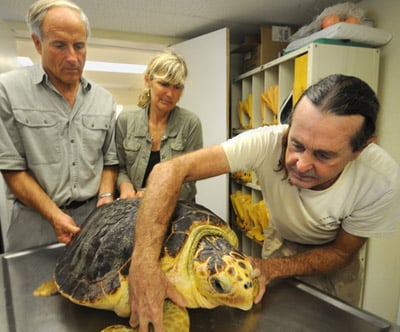 The Florida Fish and Wildlife Conservation Commission has information on how to protect sea turtles and their habitats. Click here for more details.

All marine turtle footage taken in Florida was obtained with the approval of the U.S. Fish & Wildlife Service and the Florida Fish & Wildlife Conservation Commission (FWC) under conditions not harmful to this or other turtles.