George Bellenger, who co-founded Key West Eco Tours with wife Carla in 2006, believes that even a five-minute commitment helps to preserve the Keys’ natural backcountry and dense mangrove islands.

The company operates from the Geiger Key Marina fish camp and RV park’s Geiger Key Paddle Hut in the Lower Keys — and prides itself on educating clients about the backcountry and teaching respect for the Florida Keys environment.

On each tour guides and participants take part in a “5 Minute Project,” spending five minutes removing debris from the water and mangroves.

Bellenger landed in Key West after attending the University of Delaware, discovering a subtropical paradise where rent was affordable and residents didn’t need a car.

An avid kayaker, diver, windsurfer and sailor, Bellenger worked for Tropical Watersports as an instructor, teaching windsurfing and Hobie sailing at Smathers Beach. Over the years, the watersports enthusiast closely bonded with Key West’s island community and even ran for mayor twice.

A native of Wilmington, Delaware, he met future wife Carla, who hails from Foley, Alabama, on a random walk in the 1990s near Duval and Greene streets.

“She liked my dog JoJo, the wonder dog,” Bellenger recalled.

He’s recognized for launching the Havana Challenge, the first permitted regatta since the U.S.-Cuba embargo, with government-authorized sailing from Key West to Havana.

“We wanted to bring boating enthusiasts from both countries together,” he said. “Social graces on the water trump political ideas and divide.”

Bellenger’s adventures in Cuba, where he’s visited about 30 times, were documented in Men’s Journal.

George Bellenger: A job offer first brought me to Key West around 40 years ago. Even back then, people told me I should have been here 10 years earlier!

GB: Initially, the way of life and cast of characters kept me hanging around the Keys until I eventually discovered the unbound natural world on and around the island. Then I was hooked.

GB: Earth Day, 1971. The Boy Scouts announced a new merit badge, S.O.A.R. (Save our American Resources), to inspire thought and action to protect the environment. Our troop, when I was 11, scoured the Brandywine River’s muddy banks, pulling out mostly tires. Everyone had to ride home in his underwear.

GB: Every day provides an opportunity to exert a positive influence on the world around us.

KT: What are some of the ways, personally or through your work, that you connect with and/or help protect the local environment and unique lifestyle?

GB: Thirty years ago, I wrote a phonetic Reef Relief awareness talk, highlighting dive safety and equipment protocols in six languages. Reef Relief published and still distributes it. I also initiated and led a Keys citizen response to the Deepwater Horizon oil spill. Over 500 Keys residents got HAZWOPER-certified to prepare them for cleaning birds and our coastline. I’m currently a founding board member of the Crocodile Foundation, dedicated to preservation of the endangered American crocodile. We’re hoping to build nesting boxes away from civilization and relocate nuisance crocs into a preserve abutting Crocodile Lake.

GB: We collaborate with the Florida Keys National Marine Sanctuary, Turtle Hospital, Reef Relief and the Florida Fish and Wildlife Conservation Commission to mitigate and affect positive change. Caring about future generations keeps me in the game every day. Good news helps. As an example: the terrific work Mote Marine Laboratory is doing replanting corals.

GB: To inspire future leaders. Saving the planet from environmental degradation is a multigeneration endeavor. Our generation is just “passing the torch.”

GB: Don’t give up. Every little bit helps. Together we do make a difference. 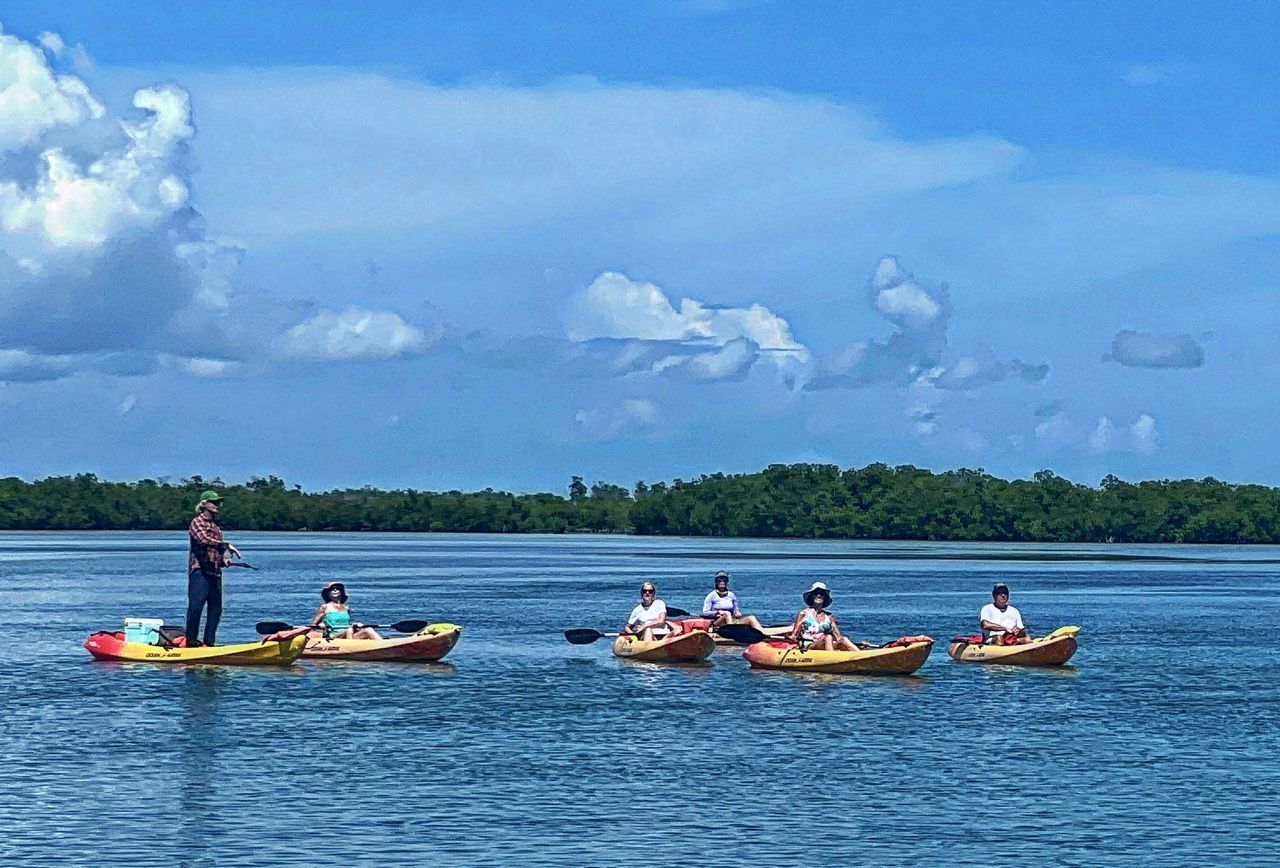 George Bellenger, co-founder of Key West Eco Tours, is dedicated to educating clients about the backcountry and teaching respect for the Florida Keys environment. 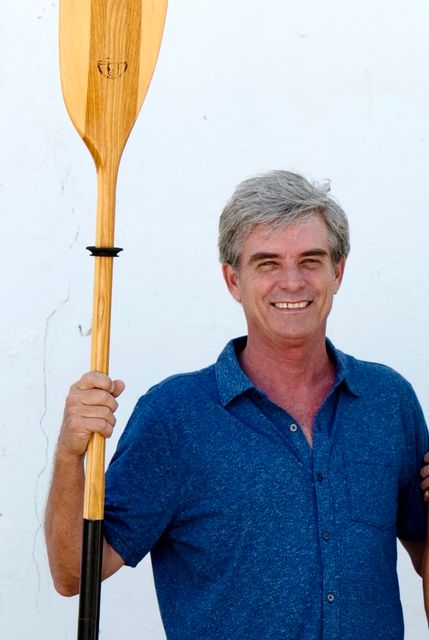 George Bellenger feels strongly that even small environmental efforts add up to make a difference. 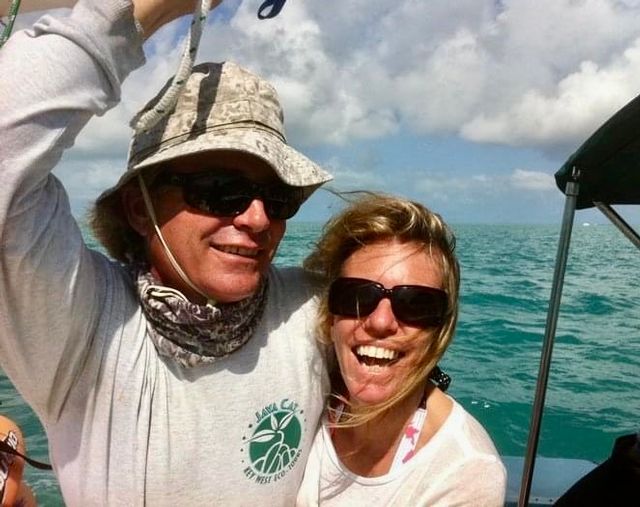 George met future wife Carla on a random walk in the 1990s near Duval and Greene streets in Key West. 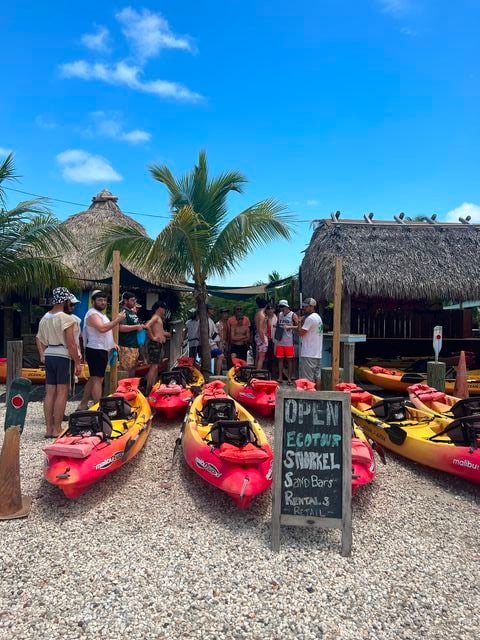 Tours depart from the Geiger Key Paddle Hut in the Lower Keys.