KEY WEST, Fla. — In September 1622 the Spanish treasure galleon Nuestra Señora de Atocha sank in the Florida Straits southwest of Key West, where it lay until Mel Fisher’s crew discovered it in 1985. In September 2022 history and shipwreck buffs can mark the 400th anniversary of the sinking with cultural and adventure events featuring those who found the Atocha.

Mel Fisher Days is set for Friday through Tuesday, Sept. 2-6, at multiple Key West locations. It honors the legacy of the late shipwreck salvor Fisher as well as the Atocha and other vessels from Spain’s 1622 fleet that were lost in the Straits.

Fisher’s discovery of the Atocha’s priceless treasure and artifacts after a 16-year search was internationally hailed as the shipwreck find of the 20th century. The salvage team, which included Fisher’s wife and children, was dubbed the “golden crew.”

The commemoration’s opening ceremony and Atocha-themed film screening are set for  7 p.m. Friday, Sept. 2, at Key West’s Tropic Cinema, 416 Eaton St. Events are to be guided by Kim Fisher and Taffi Fisher Abt, son and daughter of Mel and Dolores “Deo” Fisher, who are carrying on the family’s shipwreck searches and heritage.

Saturday, dive and treasure enthusiasts can meet members of the “golden crew” beginning at 4 p.m. during a gathering and charity fundraiser at Schooner Wharf Bar, 202 William St. The evening’s highlights include the debut and book signing of “Today’s the Day — The Mel Fisher Story” by veteran Florida Keys journalist Wendy Tucker, and presentation of the prestigious Mel Fisher Lifetime Achievement Award. Auctions, games and contests round out the event.

Mel Fisher Days’ centerpiece is Sunday’s daylong 1622 Fleet 400th Anniversary Speakers Symposium at the Marriott Key West Beachside Hotel, 3841 N. Roosevelt Blvd. Noted experts on the Atocha and 1622 fleet are to offer insights on topics including the fleet’s storied history, marine archaeology, shipwreck artifact conservation and the latest research on the tens of thousands of silver coins recovered from the Atocha. In addition, Fisher Abt is to give a personal presentation titled “Living the Dream.”

That evening, ticket holders can join the Fisher family and the featured speakers for a commemorative banquet on the hotel’s beach.

Events Monday, Sept. 5, include an all-day Fisher family meet-and-greet and book signing at Mel Fisher’s Shipwreck Treasures, 613 Duval St. Featured author Wendy Tucker will be joined by nearly a dozen other treasure-related authors during the day.

The commemoration concludes Tuesday, Sept. 6, after the unveiling and installation of a memorial plaque at Key West’s Mallory Square. The plaque salutes the spirit of adventure displayed by Mel Fisher and his “golden crew” and honors those who died when the 1622 vessels sank.

Since its inception, Mel Fisher Days has raised nearly $175,000 for charities devoted to children and their health and wellbeing. 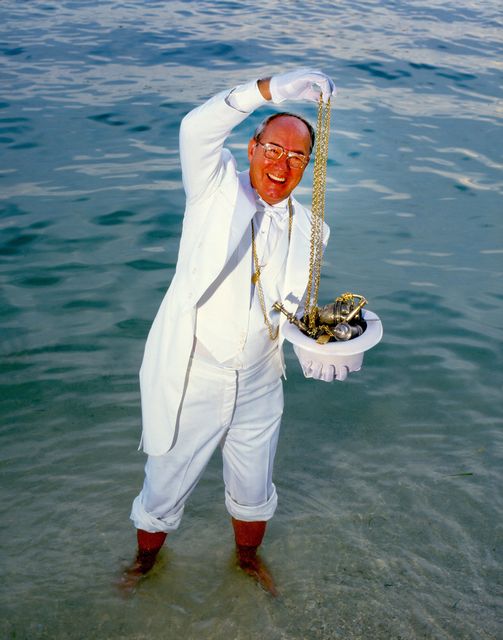 Fisher’s discovery of the Atocha’s priceless treasure and artifacts after a 16-year search was internationally hailed as the shipwreck find of the 20th century. 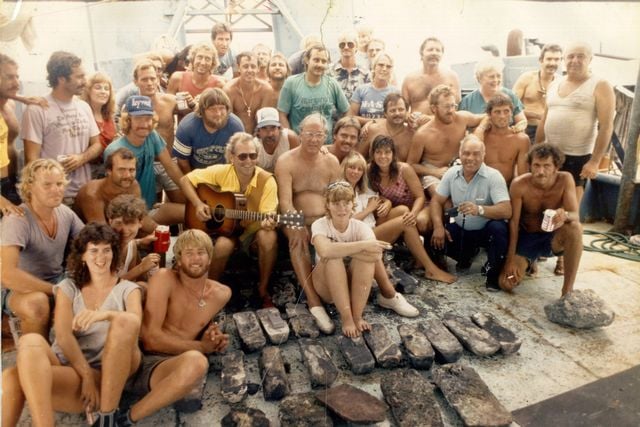 One day after the July 20, 1985 discovery of the Atocha “Mother Lode,” singer-songwriter Jimmy Buffett and the late treasure hunter Mel Fisher sit perched on a throne of silver bars surrounded by family and “Golden Crew” members. Image: Pat Clyne