In the Florida Keys, much reef diving is shallow and easily navigable. The only living coral reef in the continental United States lies just a few kicks from the surface in waters as shallow as 5 feet and often only as deep as 50 feet.

What are the benefits of shallow diving?

Secondly, divers get longer bottom times with greater safety. For divers of all levels, careful monitoring of air consumption, depth and time are still mandatory, yet it’s not unusual for a reasonably experienced diver to spend an hour or more exploring a shallow Keys reef.

What are some of the Keys’ most plentifully populated shallow reef sites for divers (and snorkelers)?

The famous Christ of the Deep statue in Key Largo stands on a concrete base on a sandy bottom barely 25 feet deep and is considered a novice-level dive.

Dazzling French Reef, also in the Key Largo area, offers depths of 15 to 40 feet. Divers swim through cliffs and canyons, gullies and archways to see large groupers and moray eels.

To the south, Islamorada features two shallow reefs that have earned well-deserved reputations as underwater paradises.

Davis Reef forms an easily navigable ledge that encourages divers to "cruise the wall" in one direction, then return to see the top of the reef. Divers shouldn't miss the chance to rub Buddha's belly for luck. The small statue has a storied history of being lost and recovered, stolen and replaced. The sand off the ledge is about 25 feet deep.

A few miles away is Alligator Reef, another shallow ledge with huge populations of yellowtail snapper, grunts, goatfish and damselfish. Alligator, punctuated by the iconic Alligator Reef Lighthouse, also has a miniwall where lobsters live unmolested and moray eels hide in crevices.

Both Alligator and Davis reefs lie in Sanctuary Preservation Areas, no-take zones that have allowed fish and crustacean populations to thrive and grow.

Marathon boasts one of the most beautiful shallow reefs in the Keys: Sombrero Reef. With depths of 6 to 25 feet, Sombrero welcomes divers and snorkelers to view brilliantly colorful marine life among magnificent coral spurs — long fingers separated by white sand. There's also an 8-foot-tall natural coral bridge known locally as The Arch. It's the perfect setting for an underwater portrait.

Marathon's middle reefs range from about 10 to 25 feet in depth. The Coffins Patch (no, there are no coffins scattered about) introduces novice and expert divers alike to an abundance of fish and corals.

Lower Keys divers have the crew of the British frigate H.M.S. Looe to thank for one of the world's most beautiful shallow reefs. The Looe ran hard aground in 1744, lending its name to a reef that's like no other in the Keys.

Looe Key, a spur-and-groove reef formation rather than an actual key, features dives ranging from 5 to 35 feet covering novice through advanced experience levels. Perhaps the greatest diversity of fish species in the Keys is found among the corals and sea fans of Looe Key. The area is fully protected from spear or surface fishing and shell collecting.

Offshore from America's southernmost city, Key West, lie Rock Key and the Eastern Dry Rocks. Divers of all experience levels are welcome in the area's 5- to 35-foot depths. These areas feature coral fingers with sand and corals in between.

Key West diving also offers a great rarity for divers: a shallow wreck dive. The Amesbury was built for military combat and is better known in Key West as Alexander's Wreck. A former naval destroyer escort that is broken into two sections 200 yards apart, it lies 5 miles west of Key West in 25 feet of water as part of the Florida Keys Shipwreck Trail maintained by the Florida Keys National Marine Sanctuary. 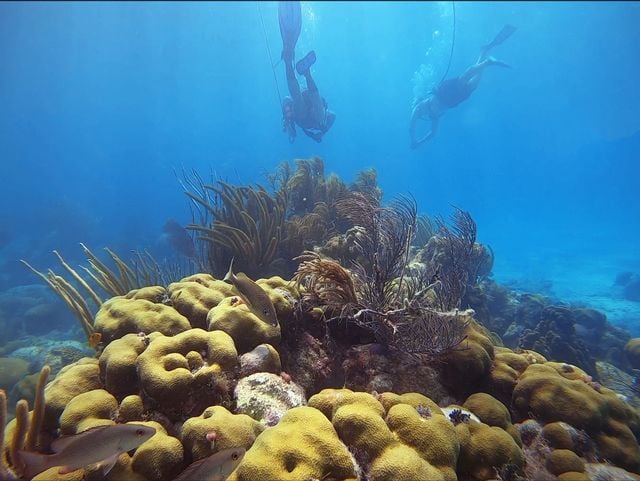 Divers hover over a shallow reef in the Upper Keys. Image: Mike Papish 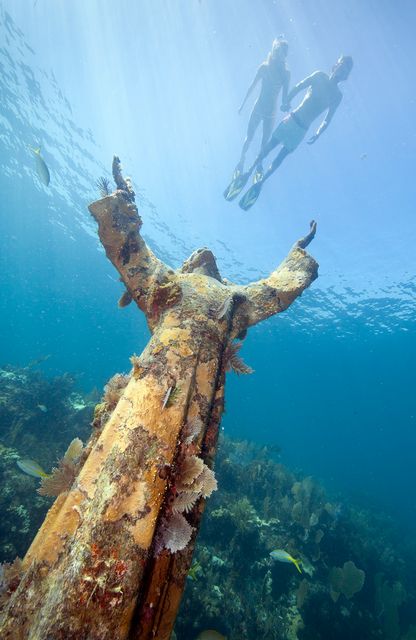 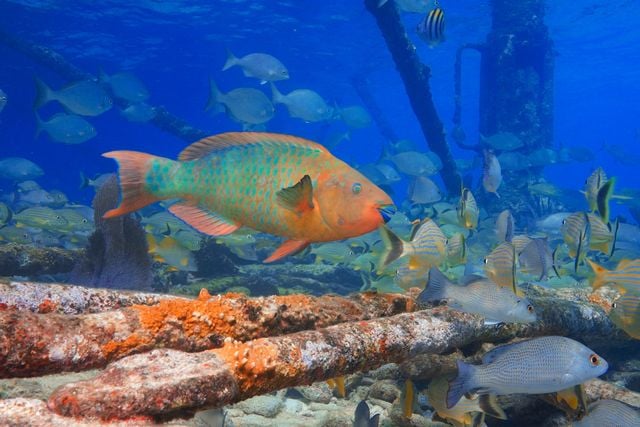 At the base of Alligator Reef Lighthouse off Islamorada, divers and snorkelers can find immensely colorful marine life. Image: Mike Papish