MARATHON, Florida Keys -- The Seven Mile Bridge, longest of 42 spans on the Florida Keys Overseas Highway, is to close temporarily to vehicular traffic during the early morning hours of Saturday, April 17, for the 40th annual footrace over the convergence of the Atlantic Ocean and Gulf of Mexico.

Monroe County Sheriff's Office deputies are to stop traffic for the Seven Mile Bridge Run beginning at 6 a.m. and are to reopen the bridge at 9 a.m.

The race is set to begin at 6:45 a.m. at the west end of the bridge in Marathon. To adhere to safety protocols, small groups of runners are to be staggered at the start line.

The April contest has become one of the most popular running events in the southeastern United States, typically filling all 1,500 racing slots.

This year, however, the field of runners is composed of only registered entrants from 2020, according to organizers, who were forced to cancel last year’s event due to COVID-19 concerns. Although international runners are unable to attend due to travel restrictions, nearly 1,000 participants representing dozens of U.S. states are expected to compete.

Some runners in the men's division will aim for the course record of 32 minutes, 59 seconds that was set in 1998 by former Keys resident Paul Marmaro.

Sonja Friend-Uhl of Brentwood, Tennessee, set the longstanding women's record of 37:15 in 2004.

The Seven Mile Bridge Run is the only scheduled event that requires the famous bridge to be temporarily closed to vehicle traffic. 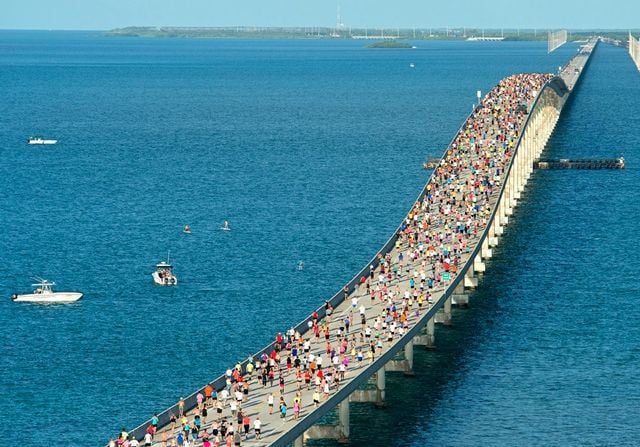 The 40th annual footrace is to be staged in a west-to-east direction, which is only the second occurrence since its inception. Pictured: runners from 2019.