Renowned photojournalist Stephen Frink is perhaps the planet’s most prolific published underwater photographer. He says he may never outgrow his “yondering years,” those years of his 20s, living in California, Hawaii and Colorado before landing in the Upper Keys.

WaterHouse Tours, his travel company focused on dive excursions and underwater photography, enables Frink to yonder to the world’s most remote and exotic destinations.

Yet home is Key Largo — a part of the Florida Keys he calls “so astonishing” because of its incredible marine life population, offshore reef and legacy marine conservation restrictions such as “no-take zones” where fishing is not allowed.

A native of Rock Island, Illinois, Frink graduated from California State University at Long Beach. He became dive certified for a part-time job that paid him 25 cents a linear foot to clean and scrape barnacles off yacht hulls, and subsequently worked in photography-related jobs in Kona, Hawaii, and Evergreen, Colorado.

In the late 1970s, he journeyed to Key Largo to visit a swim team buddy who moved there to dive for sunken treasure.

Frink is grateful he discovered Key Largo and its abundant marine life during a “sweet spot in time” when dive gear and cameras were sophisticated enough and the environment pristine.

Each June since the early 1980s, Frink has taught underwater digital imaging master classes for skilled photographers and divers. In 2016 he was honored with the Academy of Underwater Arts and Sciences Award, considered the Oscar of the ocean world.

Stephen Frink: I came on holiday to visit a buddy from our swim team when we were kids. He was working as a treasure diver, salvaging wrecks of the 1733 Spanish fleet.  I went diving and saw not only beautiful reefs, but all the tourists diving here. Assuming there had to be a sizable population of underwater photographers among them, I thought I could serve them by renting cameras and processing slide film. I already had an underwater camera and I knew how to process film. In the fall of 1978 I loaded up my Chevy van with a darkroom sink, a Nikonos camera and my springer spaniel. Together, we rolled into Key Largo from Colorado.

SF: The marine life and coral reef. It’s astonishing to me, even now, that only 6 miles offshore we have a diverse and vibrant underwater ecosystem. Key Largo, in particular, comes from a long legacy of protection beginning with John Pennekamp Coral Reef State Park. Our marine protected areas no-take zones are brilliant concepts, serving as both nursery and aquarium.

SF: South Carysfort, and photos by Jerry Greenberg of that region in decades preceding my arrival, were an epiphany. Carysfort is a long boat ride from the south end of Key Largo where I did most of my diving, so I didn’t get up there too often. But I did see the amazing fields of elkhorn and staghorn corals that Jerry immortalized in a National Geographic magazine article on Pennekamp Park in 1963. For whatever reason, I never got great wide-angle shots of these coral reefs. After a few years of not worrying about it because it would always be there for the next time, I went there. The reef was in sharp decline. To realize that in my lifetime, actually even less than a decade, the reef could profoundly deteriorate, made me appreciate how important it is to enjoy every dive, every time. The resource may not be there the next time. That was a very sobering realization.

SF: I’ve always wanted my underwater photography to inspire an appreciation of the coral reef. We protect what we love. I hope my images might educate and inspire.  Shortly after I began my career in Key Largo, I was invited to shoot for dive magazines of the day. That’s where the “words-and-photos” portion of my job evolved. I realized I couldn’t get my photos published without writing articles to support them. Developing those skills made me very active with Sport Diver, Skin Diver and Scuba Diving magazines as a freelance photojournalist. For the past decade, I’ve been publisher of Alert Diver, an upscale quarterly magazine about diver safety and lifestyle, for the Divers Alert Network, the diving industry’s largest association dedicated to scuba diving safety.

KT: What are some of the ways, personally or through your work, that you connect with and/or help protect the local environment and unique lifestyle?

SF: I serve on the board of directors for the Coral Restoration Foundation and Florida Keys National Marine Sanctuary Foundation. However, my most enduring local contribution likely is assisting with the acquisition and sinking of large artificial reef projects —the Bibb, Duaneand Spiegel Grove—that have been so successful off Key Largo.

SF: The underwater environment is ever-changing. It is challenging to photograph it in a way that’s different — and hopefully better — than ever before.

SF: It would be a cliché to say “take only photos, leave only bubbles,” but I’ll indulge myself this once.

SF: Scuba diving and underwater photography. That should be no surprise! 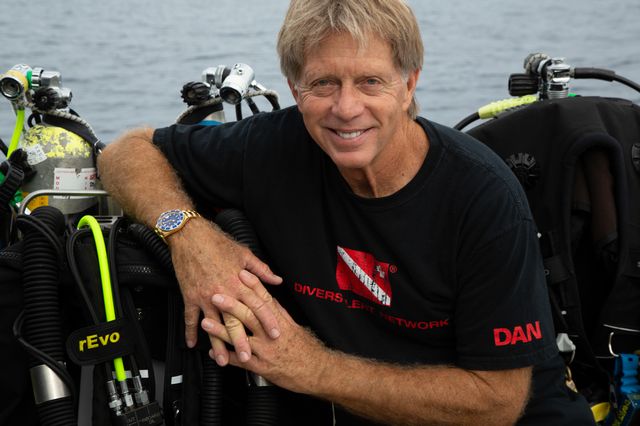 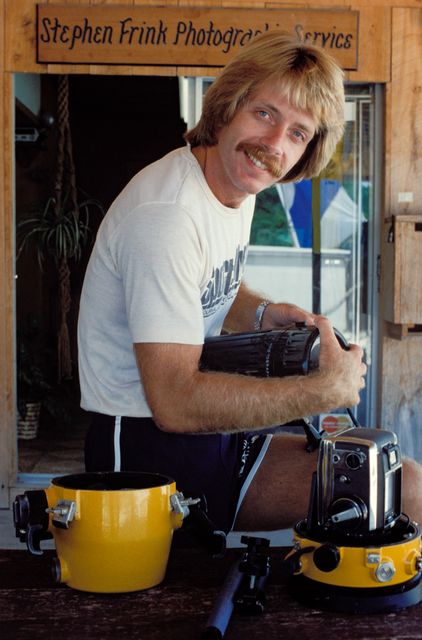 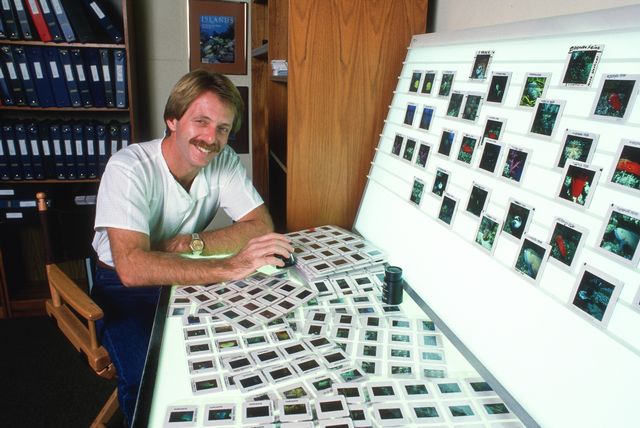 Each June since the early 1980s, Frink has taught underwater digital imaging master classes for skilled photographers and divers. 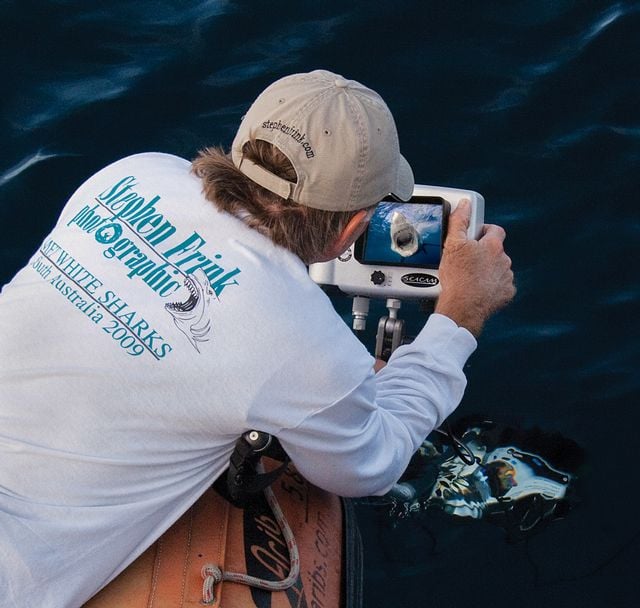 Frink at work analyzing photos from a dive with great white sharks in Australia. 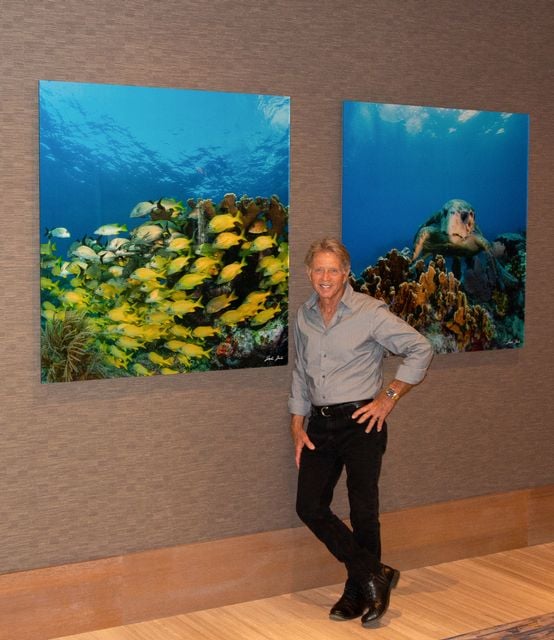 Frink says he has always wanted his underwater photography to inspire an appreciation of the coral reef. 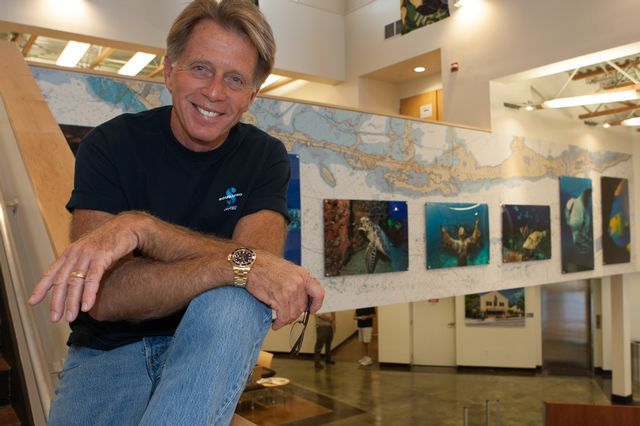 For the past decade, Frink has been publisher of Alert Diver, an upscale quarterly magazine about diver safety and lifestyle.