Following approval in March 2022 by the U.S. Environmental Protection Agency, Oxitec has now received approval from the Florida Department of Agriculture and Consumer Services to continue the trial of its genetic technology that aims to help control the number of invasive Aedes aegypti mosquitoes in the Florida Keys, according to Oxitec officials.

The project is divided into three pilots (termed B, D and E). The 2022 project launched in May (Pilot B) with the placement of Oxitec’s just-add-water mosquito boxes on private property of volunteer residents in three release areas, all on Vaca Key. Untreated comparison sites will be monitored with mosquito traps on Key Colony Beach and Vaca Key.

Pilot D is set to launch on or after July 7, 2022, according to FKMCD and Oxitec.

In November 2021, the Florida Keys Mosquito Control District (FKMCD) and Oxitec announced the completion of initial active releases of Oxitec-developed genetically engineered mosquitoes to control invasive Aedes aegypti mosquitoes in the Keys. Completed in two phases, the releases were part of initial testing to control Aedes aegypti and thereby reduce the use of insecticides to manage the urban mosquito, which can be a carrier of human-impacting viruses.

Aedes aegypti mosquitos are non-native to the United States. They are a nuisance and have the potential to spread vector illnesses including chikungunya, dengue fever, Zika and yellow fever.

The current methods of mosquito control in the Florida Keys utilize integrated pest management, which is a combination of source reduction coupled with aerial and ground spraying of various insecticide and larvicide products. However, over time some of these products are becoming less effective at controlling Aedes aegypti mosquitoes.

With that in mind, FKMCD is actively seeking new tools and technologies that can effectively reduce mosquito populations, specifically Aedes aegypti, now and into the future.

Oxitec-bred mosquitos are intended to be one of these tools with the potential to thwart the vectors of mosquito-borne diseases while helping neutralize insecticide resistance.

How does the program work?

The project received regulatory approval from the U.S. Environmental Protection Agency with review by the U.S. Centers for Disease Control and Prevention and the authorization of eight State of Florida entities including the Department of Health, according to project officials.

FKMCD is collaborating with Oxitec, a biotech company, on the pilot project to control Aedes aegypti mosquitos in a sustainable, environmentally responsible and potentially more cost-effective way. Oxitec scientists have engineered a strain of the male Aedes aegypti mosquito that targets itself to help control the species.

Oxitec releases male mosquitos because males cannot bite or spread disease. Those genetically modified male mosquitos are released to do all the hard work of finding invasive, unmodified females to mate with. Only the male subsequent offspring survive, resulting in reduced local populations of Aedes aegypti after successive releases, according to Oxitec.

When and where did it start?

The Oxitec program for a Keys-based pilot project initially received approval from the U.S. Environmental Protection Agency and Florida Department of Agriculture and Consumer Services among others.

Following approval in March 2022 by the U.S. Environmental Protection Agency, Oxitec has received approval from the Florida Department of Agriculture and Consumer Services to continue to pilot its mosquito technology designed to control invasive Aedes aegypti mosquitoes in the Florida Keys, according to Oxitec officials.

The 2022 project launched in May with the placement of Oxitec’s just-add-water mosquito boxes on private property of volunteer residents in three release areas, all on Vaca Key. Untreated comparison sites will be monitored with mosquito traps on Key Colony Beach and Vaca Key.

In 2021, there were two stages of the project. During phase one, release boxes were placed in six locations on Cudjoe Key, Ramrod Key and Vaca Key, in Marathon. Project A was comprised one box on Big Coppitt and two on Vaca Key, according to Oxitec-FKMCD project managers. During phase two of the project, also referred to as "Project B," placement areas included Vaca Key, Little Torch Key and Big Coppitt. Throughout all release locations, mosquitoes emerged each week for approximately 16 weeks, according to Oxitec.

In November 2021, the Florida Keys Mosquito Control District (FKMCD) and Oxitec announced the completion of the initial active releases.

What is the potential for success of the program?

In the Cayman Islands, Mexico and Brazil, where the technology has been used successfully, the local Aedes aegypti mosquito population was reduced by up to 95 percent, according to Oxitec. Other sites’ results have not been as positive.

Keys project officials said that release boxes were removed from their sites and ongoing monitoring was to continue, through February 2022, adding that data is to be released at a later date.

Officials said that Oxitec’s non-biting male mosquitoes emerged from boxes placed in selected regions of the Keys and dispersed as expected, mating with invasive females. They added that a project steering committee is to evaluate results of the study to determine how Oxitec mosquitoes affected populations of Aedes aegypti in the test regions.

Officials said the EPA and various Florida state agencies have confirmed Oxitec’s research to indicate no adverse effects. The male mosquitos present no risk to human health, and no risk to the environment, including endangered or threatened species or their critical habitats, according to Oxitec.

Oxitec and FKMCD claim the technology is self-limiting, so once released, mosquitoes and their offspring die; they do not remain in the environment for an extended period, Oxitec officials said, adding that the suppression effect is specifically targeted to this single species of mosquito, leaving non-target species such as bees and butterflies unharmed. Passionate opponents of genetic modification do not agree and believe there is a risk to other species, though that has not been confirmed. 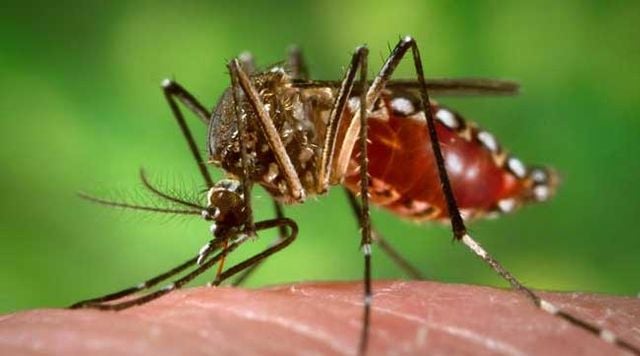 Aedes aegypti mosquitos are a freshwater mosquito, non-native to the United States. 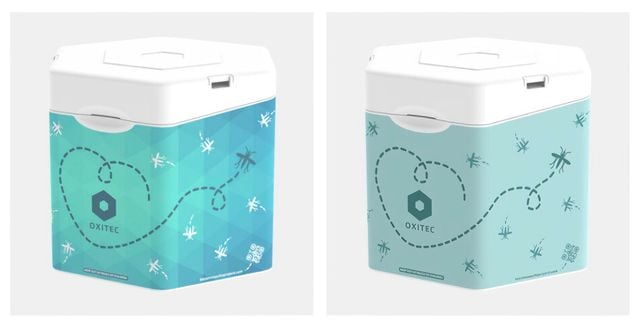 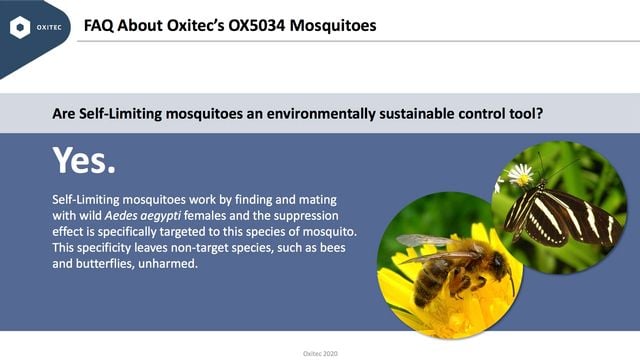 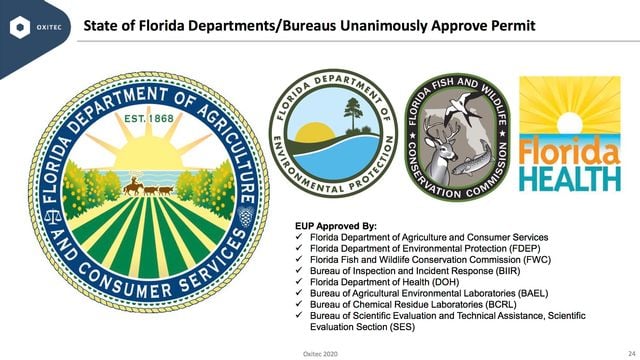 FKMCD and Oxitec officials say they have received regulatory approval from the U.S. Environmental Protection Agency, U.S. Centers for Disease Control and Prevention and seven State of Florida agencies including the Department of Health.