Savor the Flavors of the Florida Keys’ Signature Foods

By Greg Tromba|2022-07-13T19:11:27-04:00July 13, 2022|
Marathon’s Castaway Waterfront Restaurant & Sushi Bar is deservedly famous for its innovative sushi, such as the lionfish roll displayed here. (Photo courtesy of the Castaway)

I’m often asked by visitors vacationing in the Florida Keys, “Where do the locals eat?” Honestly, we eat at the same restaurants visitors do — and it would be pretty unusual to experience a less-than-stellar meal in the island chain.

In addition to having some of the best restaurants and world-class chefs, the Florida Keys & Key West also offer a variety of quintessential “only in the Keys” dishes. About 40 percent of Florida’s stone crab harvest comes from Florida Keys waters, and the sensational crustaceans appear prominently on restaurant menus throughout the Keys.

The Keys’ location and heritage played a big part in developing our islands’ signature cuisine. Our remoteness and saltwater surroundings meant residents historically relied on the ocean’s bounty for food, and the multicultural settlers brought the recipes and flavors of their homelands with them.

When dining at our restaurants, you’ll notice that many choose fish and seafood for inspiration and menu staples. Did you know commercial fishing is the second-largest industry in the Keys? The incredibly fresh fish you’re served at night was probably unloaded at the docks that morning!

Our menus often include fish caught in local waters, including yellowtail, grouper and mahi-mahi. The most recent “fish addition” to some menus is an invasive species called lionfish, which has no natural reef predators except spearfishing humans. Luckily its light white meat is delicious, with a flavor often compared to that of snapper.

Lionfish is a menu staple at the Castaway Restaurant & Sushi Bar located in Marathon (some 50 miles from Key West near the famed Seven Mile Bridge). The Castaway’s owner sometimes dives for the lionfish he serves — and it’s prepared several different ways, with one customer favorite being “wrecker style” that features a savory sauce of capers, garlic, butter and diced tomato.

The fish served at Keys restaurants might be sautéed, blackened, fried, broiled and sometimes served with a sauce containing mango or other tropical fruit that adds a tasty island twist.

You may be wondering, “What about shellfish?” Well, we’ve got you covered with our very popular specialty, Key West pink shrimp. “Pinks” are generally considered sweeter than other types of shrimp, and local chefs have dishes to die for! One of my favorite restaurants, Azur, located at 425 Grinnell St., has a mouthwatering Key West pink shrimp starter served with lemon, butter, garlic and parsley. 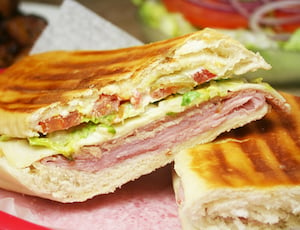 Cuban sandwiches, favored by Key West locals, are stuffed with meat and cheese like this one from the island’s landmark El Siboney Restaurant.

Keys locals and visitors also love their Florida stone crab claws, which are known for their sweet and succulent meat and are harvested in the Keys from around mid-October to May 1. Because nearly all the crab’s meat is contained in its claws, they are the only parts of the crustacean that are harvested.

Once the claws are removed, the crab is returned to the sea where its claws regenerate over two years. For that reason, stone crabs are considered a renewable resource — and the Florida Keys are responsible for a good percentage of the state’s overall harvest.

During our lobster season, which runs from Aug. 6 to March 31 each year, you’re in for a real treat! Unlike stone crabs, lobsters found in the Keys are clawless. Known as spiny lobsters, they offer delectably tender meat (especially with LOTS of butter).

The mollusk conch (which is pronounced “konk,” B.T.W.) is no longer harvested in the Keys, but it’s imported and still trendy among discerning diners. Conch can be found in chowders, deep-fried fritters, salads and even breaded and fried as conch steak.

Many of our local chefs have their own unique recipes. Mangoes restaurant, located at 700 Duval St., offers really yummy conch fritters served with a Key lime aioli and lime sauce. D.J.’s Clam Shack, located at 629 Duval St., is another one of my favorites for delightful, golden deep-fried fritters. 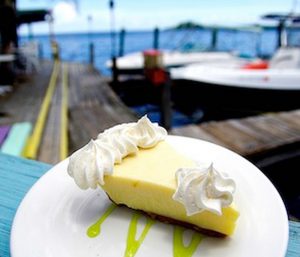 Few people visit the Florida Keys without sampling a few pieces of Key lime pie, renowned as the island chain’s signature dessert. It was even voted the official pie of Florida by the state legislature in 2006.

The most popular ethnic food in the Keys is Cuban, brought to Key West by the cigarmakers and their families who fled their homeland in the 1800s. If you’re craving authentic Cuban food, this is the place. El Siboney, located at 900 Catherine St., has one of the best roasted pork (puerco asado) dishes I’ve ever tasted.

The old saying about “leaving room for dessert” is particularly apropos when you’re in the Keys — because everyone should experience our signature dessert, Key lime pie.

I’ve personally sampled at least 10 versions of the luscious treat at restaurants from Key Largo to Key West. All were different — and equally delicious. For example, Blue Heaven offers its pie topped with a mile-high meringue and Kermit’s has a fluffy whipped cream topping.

From fresh-off-the-boat seafood to traditional Cuban food to Key lime pie, the Florida Keys have a wealth of unique culinary treats for you to sample. What will be your favorite Keys dish?