By Carol Shaughnessy|2022-07-06T18:29:27-04:00July 6, 2022|
Visitors toast with their “cafecitos” in front of Key West’s Southernmost Point marker. The iconic marker salutes Key West’s status as the southernmost city in the continental United States, and scores of people snap photos beside it each day. (Photo by Rob O’Neal, Florida Keys News Bureau)

Anyone who knows much about Key West is aware that it was once the home of Ernest Hemingway and Tennessee Williams, that Jimmy Buffett created his Margaritaville empire on the island, and that former President Harry Truman ruled the United States from a vacation getaway known today as the Little White House. 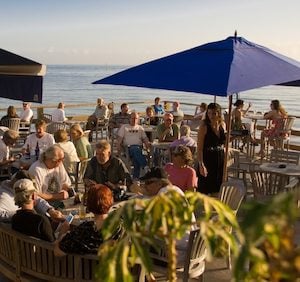 But beyond those well-known facts lies a wealth of lesser-known tidbits and tales about the island city that’s located closer to Havana than it is to Miami.

And speaking of Key West’s location, it really IS the southernmost city in the continental United States. It’s 755 miles south of Los Angeles and only 24.5 degrees above the equator.

But “southernmost” isn’t the only moniker the island city has earned. It’s also nicknamed Bone Island. According to local lore, when the Spanish discovered the island they found the landscape littered with bones from the victims of a war between two native tribes. The Spaniards dubbed the place “Cayo Hueso,” which can be loosely translated as (yes, you guessed it!) Bone Island.

Since that early discovery, Key West has grown considerably — not just in population, but also in land mass. Once a diminutive 1,575 acres, it’s now significantly larger. Part of the new acreage was deliberately created in a manmade dredge-and-fill process, but some can be credited to Mother Nature’s unique red mangrove. It seems the mangroves trap sand, leaves, sediment and other debris in their tangled aerial roots, and that natural blend eventually solidifies into new land.

These days, in fact, the distance around Key West is about 12.5 miles. Each June, that circumference becomes a saltwater racecourse for competitors during the annual Swim Around Key West. 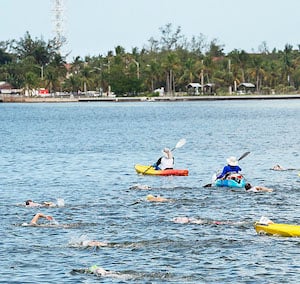 Athletes in the annual College of the Florida Keys Swim Around Key West navigate the 12.5-mile distance around the island. (Photo by Rob O’Neal, Florida Keys News Bureau)

Presented by College of the Florida Keys, the challenge is open to solo swimmers and those in relay teams of two to six, with or without fins — and even solo swimmers using a mermaid tail or monofin.

They navigate past island landmarks such as the Southernmost Point marker and Mallory Square, site of the famed nightly Sunset Celebration, while trying to outpace their rivals.

Speaking of Key West landmarks, the fine old building that houses Bagatelle Restaurant, bedecked with porches and dining decks, was once the home of local fire chief Hiram Fulford. Built in 1890, the gracious home stood next to the public library on Fleming Street until it was transported to its current location at 115 Duval St. Both for its history and cuisine, the place is well worth a visit.

Another home that became a legendary restaurant stands at 700 Waddell St. Now the gourmet Louie’s Backyard, it was once the residence of wrecker James Randall Adams. (The profitable industry of wrecking, or salvaging shipwrecked vessels and their crews and cargoes, helped make 19th-century Key West the wealthiest city per capita in the entire United States.) According to legend, Captain Adams boasted that everything in his gracious Classic Revival house had originally been salvaged from ships that foundered on the offshore reefs. 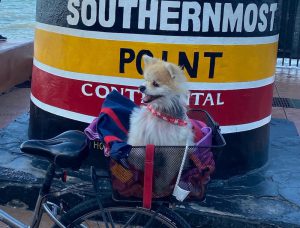 Bailey stops for a photo op at the Southernmost Point marker before heading to Dog Beach. (Photo by Alyson Crean)

In the early 1970s, the lovely oceanside dwelling was first opened as a restaurant. One of the place’s notable customers was a locally infamous mutt named Ten Speed, whose favorite cocktail was Kahlua and cream.

Next door to Louie’s lies a pocket-sized hideaway beach on the Atlantic that’s dedicated to people and their pooches and, quite reasonably, is called Dog Beach. Around cocktail hour each day, it’s the norm to see tail-wagging dogs and their owners hurrying down the street together — the dogs headed for the beach to meet their canine pals for a rollicking game of coconut chase; and the people making their way to Louie’s cocktail deck, where they can sip island-style libations and watch their pets at play.

Do these small nuggets of knowledge and lore make you want to find out more about quirky and colorful Key West? Then start your exploration by clicking here.