Hundreds of divers and snorkelers explored part of the continental United States’ only living coral barrier reef Saturday, July 9, while rocking to a unique sub-sea concert that promoted reef protection. (Yes, a concert. And it’s unlike any other dive or snorkel experience on the planet.) 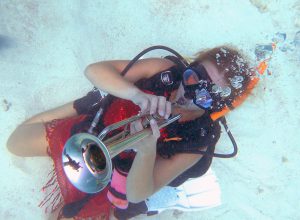 It’s called the Lower Keys Underwater Music Festival, and it takes place each year about 6 miles south of Big Pine Key at Looe Key Reef — one of the most spectacular areas of the Florida Keys National Marine Sanctuary.

Established in 1990, the sanctuary is an environmental blessing that protects the waters surrounding the entire Keys island chain.

And the concert? Created to encourage coral reef protection and environmentally responsible diving, it’s presented each year by the Lower Keys Chamber of Commerce and coordinated by Keys radio station US1 104.1 FM. Now in its 38th year, the marine-themed music fest debuted in the mid-1980s — and ever since, attendees have agreed that it makes the already wonderful Keys underwater experience even better.

This year as in the past, the incomparable concert drew several hundred divers and snorkelers to enjoy the sound of music while discovering the ecosystem that lies beneath the sea.

The festival began Friday night with a kickoff gathering at Mote Marine Laboratory’s Lower Keys facility, where attendees learned about Mote’s coral cultivation and reef restoration efforts that are underway in the island chain. Saturday morning, they grabbed their gear and boarded boats heading for Looe Key Reef. 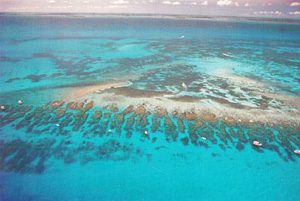 How did the festival work? Music broadcast by the radio station was piped underwater via special speakers suspended beneath boats above the reef, providing a “submerged soundtrack” for participants. And because sound travels faster in water than it does in the air, it had an ethereal and multidirectional aspect that was fascinating to hear.

Swimming among colorful tropical fish and coral formations, divers and snorkelers listened to sea-focused offerings that included the Beatles’ “Yellow Submarine,” the Zac Brown Band’s “Island Song,” and the themes from “Gilligan’s Island” and “The Little Mermaid.”

The latter was particularly appropriate, because some divers spotted several “mermaids” beneath the waves. Joined by other costumed participants dressed as sea creatures, they mimicked playing musical instruments underwater —adding an appealing visual component to the soundscape.

But it’s not just divers and snorkelers who appreciated the enhanced marine environment. Even fish on the reef reacted positively, according to fest-goers, seemingly swaying to the music as they swam. 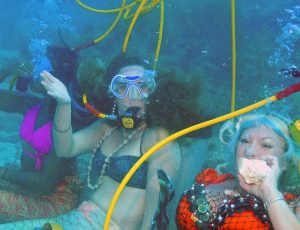 Diver awareness announcements throughout the broadcast stressed the importance of not touching corals or leaving litter underwater, using mooring buoys instead of anchoring when boating, respecting dive flags, and other ways of minimizing environmental impacts while exploring the reef.

“The Underwater Music Festival is a one-of-a-kind event that immerses snorkelers and divers in the beauty and splendor of the third-largest coral reef in the world,” said Steve Miller, executive director of the Lower Keys Chamber of Commerce and programmer of the festival’s playlist.

“Equally important,” Miller advised, “the music underwater, along with the mermaids and other visual attractions, helps draw attention to the message: how to protect and save the reef while there’s still time.”