One October in Key West, I spotted a dog impersonating an iguana. A man garbed like King Tut strolling down the street beside a mermaid wearing sequined gauze and seashells. Five slightly intoxicated guys in pink tutus and bushy beards. Two bewildered goldfish (you might ask how a goldfish can look bewildered, but these did!) swimming atop a pseudo coral reef made out of reef-printed shower curtains. And so much more that it defies description. 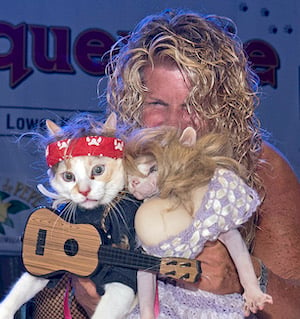 You guessed it … Fantasy Fest was underway.

I have a strong affection for Fantasy Fest. It’s an extravagant display of Key West’s creativity, individuality and flamboyant spirit — where people of all ages, shapes and levels of attractiveness can “play dress up” and feel great doing it.

Each year, a different theme provides inspiration for costumes and floats. Fantasy Fest 2022 takes place Oct. 21-30, themed “Cult Classics & Cartoon Chaos” (and believe me, a lighthearted dollop of “chaos” is not unlikely).

Participants are encouraged to draw costume ideas from the festival theme, portraying characters inspired by favorite cartoons and television or film productions with a cult following. Influences might include animated offerings like “Family Guy” or “Underdog,” or Hollywood classics like “Mad Max” or “Pulp Fiction.”

The fun begins Friday, Oct. 21, with the “Thanks for the Memories” Royal Coronation Ball to crown the Fantasy Fest king and queen, held at the Truman Waterfront’s Coffee Butler Amphitheater. Aspiring royals earn their titles by raising funds for the Florida Keys’ A.H. of Monroe organization. 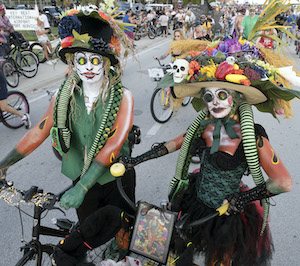 Key West’s Bahamian roots are celebrated that weekend with Friday and Saturday’s family-friendly Goombay street party in historic Bahama Village. Attractions include nonstop live music, food and a spirited salute to the cultural connection between Key West and the Bahamas.

And on Sunday “zombies” are to prowl the island streets, when the Zombie Bike Ride gives a pedal-powered twist to ghoulish fare ranging from Bela Lugosi films to television’s “The Walking Dead.”

Subsequent festival highlights include Wednesday’s Pet Masquerade, where costumed dogs, cats, birds and more prance across the stage at the Coffee Butler Amphitheater. You’ll find people dressed as animals and animals dressed as people during this family-style evening of engaging antics.

Contestants might impersonate Scooby Doo and his cohorts, cartoon feline Garfield, a flock of Angry Birds or even the fantastic Wallace and Gromit of British film fame.

Thursday brings the lavish Headdress Ball, also at the amphitheater, featuring prizes for the best masks and headdresses. Typically sporting feathers, glitter and glitzy accessories, many entries tower above their wearers’ heads in a fine display of design artistry. 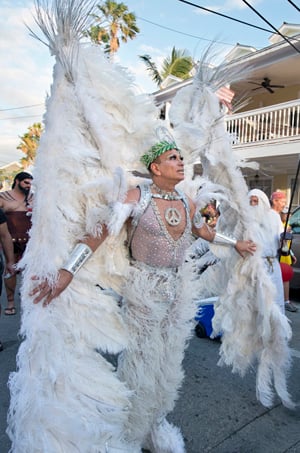 The cartoon chaos takes to the streets Friday, Oct. 28, during the Captain Morgan Masquerade March, sometimes called the locals’ march for the large number of Florida Keys residents that participate each year — sharing their costuming creativity and party-loving spirit with visiting festival fans. Together, the vividly garbed marchers promenade from Key West’s Frances Street to an after-party at the Green Parrot Bar on Whitehead Street.

Other scheduled standouts include the mini-but-mighty “Smallest Parade in the Universe,” tutu and toga parties, multigenre musical salutes, themed costume contests and the fun-filled Fantasy Market at Truman Waterfront Park.

The festivities will be most spectacular, however, during the Bud Light Fantasy Fest Parade, when brilliantly-conceived floats travel Key West’s downtown streets to the cheers of some 60,000 spectators. Walking groups dressed in bright robes and feathers add fire and color to the procession — as do the cleverly costumed revelers gleefully following the floats.

All reflecting the event’s freewheeling creativity, they start at Whitehead and Southard streets, travel down Whitehead toward the Gulf of Mexico, turn onto Front Street and then proceed along Duval Street to the Atlantic Ocean.

Past parade showstoppers have included a “living orchestra” of instruments conducted by an oversized Mozart replica, a prehistoric “Flintstones” ensemble and a massive dragon float and marchers saluting television’s epic “Game of Thrones.”

Whether you’re heading to Key West for Fantasy Fest 2022, planning to glimpse events from home via social media and webcams, or already vowing not to miss next year’s fun, enjoy a full-scale festival preview by clicking here.