Why ‘Fort Forgotten’ is So Unforgettable

By Carol Shaughnessy|2020-10-07T19:20:39-04:00October 7, 2020|
Key West locals and visitors can enjoy Fort Zachary Taylor Historic State Park and its beach throughout the year, while tours of the Civil War-era fort offer a glimpse into Key West’s military heritage. (Photo by Barbara Clarkson)

Fort Zachary Taylor Historic State Park is renowned for a picnic area shaded by Norfolk pines and cooled by ever-present breezes — and a long, lovely Atlantic-front beach that Key Westers regard as one of the best-kept secrets on the island.

Snorkeling fans love the park’s relatively deep water and rocky promontories close to shore — which means snorkeling off the beach can bring encounters with tiny, colorful tropical fish that seem eager to make eye contact. And the wooded nature trails are ideal for spotting bird life. 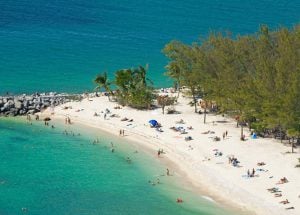 “Fort Zach,” as the place is affectionately called, is a popular site for sunset weddings, family get-togethers and enjoyable picnics (these days, with social distancing properly observed).

One of the most memorable weddings ever held at the park was set in a shady area overlooking the water. Dolphins played in the bay, an eagle watched the ceremony from the branch of a tall pine, and — I observed this firsthand as a member of the wedding party — a couple of boaters in the channel offshore hollered to the groom (or was it the bride?), “It’s not too late to save yourself! Jump and we’ll pick you up!”

No matter how appealing the park’s recreation and wedding areas are, it’s the Civil War-era fort itself, once nicknamed “Fort Forgotten,” that really makes it unique.

Its construction was begun in 1845, not long after Florida became a state. Five years later, after former President Zachary Taylor died in office, the structure was named in his honor. Work on it continued thereafter — though relatively slowly — with setbacks and hardships ranging from materials shortages to yellow fever and storms.

The fort was still unfinished when the United States’ Civil War broke out, but nevertheless it served as the home base for a Union blockade of Confederate ships. Though Key West was the southernmost port in the U.S., oddly enough it remained in Union hands throughout the war — and scores of blockade-running ships were captured offshore. 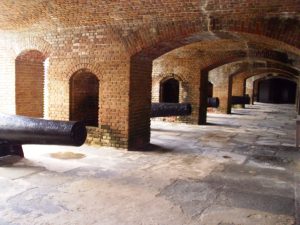 In 1866, construction on the fort was finally completed. Surrounded by water and connected to land by a causeway, the three-story structure featured a granite foundation, brick walls five feet thick, and remarkable vaulted ceilings.

Fort Taylor later saw duty during the Spanish-American War and both World Wars — but, despite attempts at modernization, advances in weaponry and defense tactics eventually made it obsolete. Unneeded and remote, it fell into disrepair.

In 1968 a restoration effort began, spearheaded by a Key Wester named Howard England. Slowly and carefully, the fort and its armament were excavated — revealing the largest collection of Civil War cannons in the United States.

In 1971, the “forgotten” fort was placed on the National Register of Historic Places. Two years later, it was designated a National Historic Landmark.

Today, Key West locals and savvy visitors enjoy the park and beach throughout the year, while fort tours offer a glimpse into the island’s military heritage. The fort is also a favorite of Civil War re-enactors, who set up authentic camps and stage recreations of historic military maneuvers.

Now far from forgotten, the structure is watched over by a team of dedicated rangers and a citizens’ support group known as the Friends of Fort Taylor — and rightfully recognized for the role it played in the rich history of the colorful island city.