The Sea Monster of Carysford Reef

In the 1800s, the wrecking industry made Key West the richest city per capita in the United States. Stories still abound about the Florida Keys wreckers’ navigational skills, proud natures and courage in daring stormy seas to salvage crews and cargoes from sinking ships. 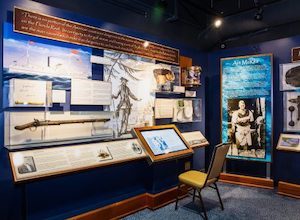 Yet few people know about one of their strangest exploits: salvaging a sea monster off Key Largo’s Carysford (today called Carysfort) Reef.

By 1828, Congress had ruled it illegal to take cargo salvaged from ships wrecked in U.S. waters to any foreign port, so an Admiralty Court was established in newly settled Key West to oversee salvage matters.

Keys wreckers with strength and stamina braved high winds and waves, racing to the reef in their sloops to rescue sailors and their cargoes. In the Admiralty Court, they were compensated for their efforts, with the amount determined by the value of the vessel and merchandise saved, and the degree of danger they faced.

As well as bringing economic opportunity, wrecking set fashion and style trends. Salvaged goods were often sold to residents at auctions — so, if a cargo of lovely silk shawls was salvaged, the Keys’ fine ladies proudly wore them. The next wreck might carry laces, perfume or fancy shoes — and suddenly the shawls would be old news.

Though some people think Keys wrecking was unprincipled or disorganized, that wasn’t the case. Strict rules governed the industry, and captains had to prove their good character to get licensed by the Admiralty Court. 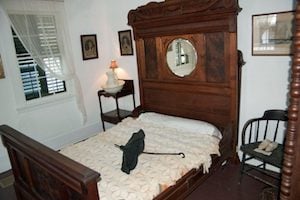 Key West’s Oldest House Museum, once the home of shipwreck salvager Captain Francis Watlington, is filled with artifacts dating back to the salvage era.

No one thought more highly of the wreckers’ character than Albert Koch … discoverer of the monster of Carysford Reef.

A German-born paleontologist, Koch was passionate about fossil bones. In 1844, he began a two-year odyssey through the eastern U.S. looking for sea monsters.

The giant fossilized serpent, which Koch called the Hydrarchos, measured 114 feet long. And in June 1845, the New York Shipping and Commercial List reported that the ship transporting it (and 644 bales of cotton) to New York from Mobile had sunk in Florida Keys waters.

Albert Koch, waiting in New York, was devastated. Had any wreckers managed to reach the sinking ship in time to save his monster? Or did they toss the boxes of fossil bones aside and concentrate on saving objects with more obvious value?

Even if the Hydrarchos had been rescued, he couldn’t afford the high salvage fees the court would assess for its return. He feared his treasured monster was lost forever.

The Keys wreckers, however, had a surprise for Albert Koch. One day, he received joyful news from Key West — the wreckers had agreed on a fee for the salvaged cotton, but decided to send the “giant sea serpent” to its owner in New York free of charge, as a service to science and man. 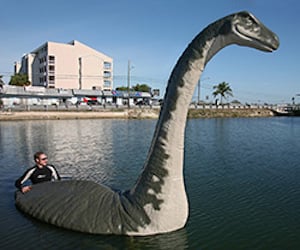 It’s not the Hydrarchos, but this “sea monster” was spotted in Key West in 2008. Called “Nessie,” it was fabricated by New York artist Cameron Gainer, shown here with his oddly engaging creation. (Photo by Rob O’Neal, Florida Keys News Bureau)

Months later the Hydrarchos was on display in New York, astounding the public, when Albert Koch encountered the captain of the sunken vessel. He told Koch of the rescue of the great Hydrarchos — which apparently had tried to return to the sea.

As the wreckers were loading the boxes of fossil bones onto their ship, one slipped overboard. Seconds later a wrecker followed the box into the storm-swept water, risking his life to save it.

Today the Key West Shipwreck Museum at 1 Whitehead St. tells the wreckers’ story through films, re-enactors and artifacts salvaged from the shipwrecked Isaac Allerton. Key West’s Oldest House Museum at 322 Duval St., once home to wrecking captain Francis Watlington, is filled with artifacts dating back to the colorful era. And in Islamorada, the Florida Keys History & Discovery Center at 82100 Overseas Highway explores facts and fiction about the  wrecking industry in an exhibit titled “Pirates, Wreckers and Salvagers.”

Yet even after you explore the museums, a question will probably remain: why did the wreckers act so generously about the Hydrarchos?

Maybe they did realize its importance to science, or maybe their motivation was more elemental. During that fierce storm at sea, maybe they recognized the monster of Carysford Reef as a fellow survivor — and simply wanted to bring its old bones to safety.