The ‘Papa’ and Paula

Paula Deen’s husband looks a lot like Ernest Hemingway. So much, in fact, that he won the 2018 Sloppy Joe’s Hemingway® Look-Alike Contest, the undisputed highlight of Key West’s annual Hemingway Days festival. 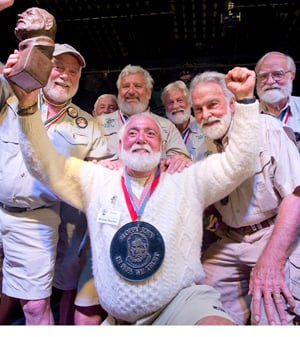 Michael Groover, who bested 150 other Hemingway hopefuls on his ninth attempt, poses with past winners just moments after his victory. (All photos by Andy Newman, Florida Keys News Bureau)

Michael Groover, a jovial white-bearded harbor pilot from Savannah, Georgia — who just happens to be married to the bubbly celebrity chef — triumphed over 150 other entrants to win the contest at Sloppy Joe’s Bar, a frequent hangout of the legendary author when he lived in Key West.

And Paula, surrounded by a huge crew of family and supporters, cheered like crazy and waved a super-sized placard emblazoned with Michael’s face as his victory was announced.

This wasn’t the first time he had competed for the title of “Papa” Hemingway. In fact, it was his ninth attempt — and the years of trying made the triumph even sweeter.

“I call it persistence,” Michael said as he accepted congratulations from Paula and former contest winners outside Sloppy Joe’s. “I think everybody here really has to pay their dues, and I did.”

Look-alike hopefuls from as far away as Australia and Norway flocked to Key West to take part in the three-night competition on Sloppy Joe’s  stage.

Most wore sportsman’s attire or safari togs, attempting to heighten their resemblance to Hemingway in his later-years “Papa” persona — although one finalist, Arizona’s Matthew Collins, portrayed a dark-haired young Hemingway without the characteristic beard.

Cheered by crowds of spectators, the aspiring “Ernests” took turns parading across the stage. They were scrutinized by a judging panel of former winners including 2017’s Richard Filip of Fayetteville, Texas.

The competition — and the Hemingway Days festivities — celebrate the writing talent and colorful lifestyle of the man who lived and wrote in Key West during the 1930s. 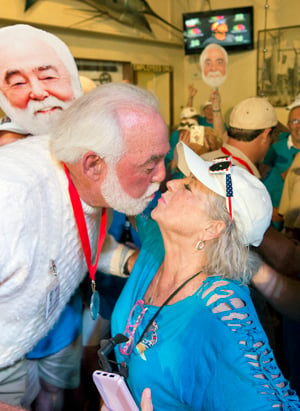 Michael Groover kisses Paula after competing in the semi-final round of the Hemingway® Look-Alike Contest, the highlight event of Key West’s annual Hemingway Days festivities.

For Michael Groover, the connection with Ernest goes deeper than appearance. It also encompasses shared passions.

“I feel a kinship, because I love fishing and hunting,” he explained.

And while he’s not the dedicated writer that Hemingway was, Michael does have a book to his credit.

“It wasn’t an Ernest book, I can tell you that,” he admitted with a grin. “It was ‘My Delicious Life With Paula Deen.’ It didn’t sell like Ernest’s books.”

For Paula, seeing Michael win meant he had achieved a long-held dream.

“I saw that he was so passionate about it and he wanted to do this; he wanted to participate,” she said in her rich Southern voice.

And participate he did — forging friendships among the tight-knit clan of former winners and repeat contenders, who work tirelessly each year to raise money for scholarships for Key West students.

“I think it’s a great way to carry on Hemingway’s legacy, to help kids go to college,” Michael said. “I think it’s a tribute to him to be able to do that.”

During his years in Key West, Ernest Hemingway wrote classics including “For Whom the Bell Tolls,” “Death in the Afternoon” and “To Have and Have Not.”

The final round of the 2018 contest took place on the 119th anniversary of Hemingway’s July 21 birth.

“I think it’s incredible that I won any day, but it means a lot that it’s on his birthday,” said new “Papa” Michael Groover, as the previous winners welcomed him into their bearded brotherhood. “I’m just happy to be a part of this group.”