Once, when I was young and naïve, I accompanied my then-boyfriend on a vacation to a lush tropical country that shall remain nameless. We lazed on white-sand beaches, snorkeled in azure seas and danced under a romantic full moon. On our final night in this idyllic setting, my boyfriend nearly got hauled off to a third-world prison for grilling a fish.

I was out picking up last-minute gifts. Fueled by too many frozen drinks and worried that smoke from his grill might rise from our hotel room’s balcony (where grills were, perhaps wisely, prohibited), he decided to cook his “catch of the day” on a makeshift barbecue in the bathtub — a place he regarded as perfectly reasonable. 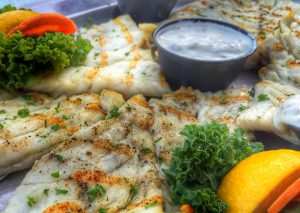 This tasty catch, harvested by Florida Keys  fishermen, was NOT grilled in a bathtub.  (Photo by Elmar Elfers, Florida Keys Photo Adventure)

By the time I returned, our room was unnervingly full of fishy-smelling smoke and a 350-pound security guard named Raoul, who couldn’t decide whether to laugh or call the federales.

Laughter won — but when smoke alarms in the corridor began shrieking, the federales arrived even without Raoul’s summons.

As we fled the country the next morning, I found myself reflecting that this wasn’t the way a vacation was supposed to be.

A vacation is supposed to be relaxing. Renewing. Fun. Filled with unexpected happenings (though not those involving large security guards) and new discoveries. And that’s what vacationing in the Florida Keys is all about.

Sure, you can have a wonderful getaway by indulging in beach time and sampling tall cool cocktails at the local bars. But you’ll create far richer memories if you explore, seek out fresh experiences and take your vacation to the next level.

Here are three of my favorite spots in the Upper and Middle Keys for doing just that. 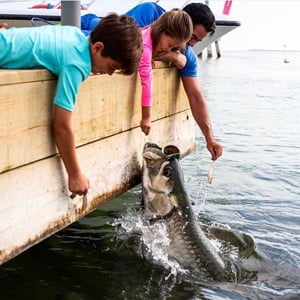 Feeding wild tarpon at Robbie’s in Islamorada is a Keys tradition enjoyed by kids and adults from around the world. (Photo courtesy of Robbie’s)

Robbie’s. Located at mile marker 77.5 bayside in Islamorada, Robbie’s is a wonderfully funky marina with a true Old Keys atmosphere — and the biggest draw is feeding wild tarpon from the marina’s dock. The gang at Robbie’s has been feeding these fishy friends for decades, and kids and grownups delight in purchasing buckets of baitfish to share the oddly satisfying experience. You’ll also find eco-tours and watersports excursions, fishing charters and (wait for it!) the Hungry Tarpon Restaurant.

Pigeon Key. Just over two miles west of Marathon, nestled beneath what’s now called the Old Seven Mile Bridge, lies the five-acre historic treasure of Pigeon Key. In the early 1900s the island was a base camp for workers constructing the original Seven Mile Bridge, the centerpiece of the astonishing Florida Keys Over-Sea Railroad that stretched from mainland Florida to Key West — connecting the Keys with each other and the “real world” for the first time. Today, you can reach Pigeon Key by ferry. Once you’re there, the modern world fades away. Take a guided historical tour, view the restored turn-of-the-century buildings and small museum, snorkel the shoreline and absorb the history of the early Florida Keys.

Morada Way Arts & Cultural District. One of the Upper Keys’ most popular regular arts events is the Morada Way Arts & Cultural District’s Third Thursday ArtWalk in Islamorada. Scheduled the third Thursday evening of each month (as you might guess from its name), it features national and Keys-based artists and art galleries at Morada Way between mile markers 81 and 82 — plus culinary “art” from local eateries and performances by area musicians and entertainers. But the district’s enticing attractions are definitely not limited to art walk evenings. Morada Way’s rich blend of visual artistry, fine crafts and great food can be experienced virtually any time.

Whether you make memories by exploring one of the suggested spots, or find your own adventure, let it recharge your batteries and introduce you to a new aspect of the fabulous Florida Keys. But please (and I speak from personal knowledge here), no matter how many unique vacation experiences you crave, don’t even THINK about grilling fish in your hotel room’s bathtub.