When Ernest Hemingway lived and wrote in Key West during the 1930s, he spent much of his leisure time with friends at Sloppy Joe’s Bar. On Sept. 17, the beloved Key West watering hole reopened after being closed for six months because of the global COVID-19 crisis. 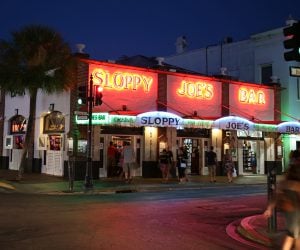 Patrons returning to the place that day might have thought they saw Ernest himself raising a toast at the long horseshoe bar — because the reopening drew several men who looked uncannily like the literary legend who loved the island.

Sloppy Joe’s closed March 17 when Florida’s governor ordered the shutdown of the state’s bars, pubs and nightclubs in an effort to slow the spread of COVID-19. And after that long closure, management and staff were delighted to be back.

“Sloppy Joe’s has been closed 184 days, so we’re very happy to have the doors open and to be able to share the bar again with everyone in the world,” said longtime spokesperson Donna Edwards.

Management plans to operate the reopened bar at 50 percent capacity, maintain strict social distancing and require patrons to wear face coverings except when they’re seated to eat or drink — responsible health safety tactics during the “new normal” brought about by the global pandemic.

Why has Sloppy Joe’s, a fixture on Key West’s famed Duval Street, been associated with Hemingway for more than 80 years? According to historians, Ernest and the bar’s proprietor, Joe Russell, were good friends and fishing companions. A charter-boat captain and former speakeasy operator, Joe was nicknamed “Josie Grunts” by Hemingway, and eventually became the model for a character in the author’s classic novel “To Have and Have Not.”

Ernest, by the way, has been credited with suggesting that Joe Russell call his bar Sloppy Joe’s, a name adopted from a favorite bar in Havana. He also described himself as a “silent partner” in the place and made it a regular hangout where he drank with literary and local cohorts. He even met Martha Gellhorn, who later became his third wife, at the iconic spot. 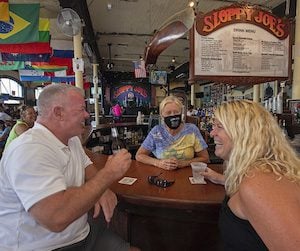 The annual “Papa” Hemingway Look-Alike Contest was born at the bar four decades ago, and it’s been hosted there each July ever since.

But this past July, the virus forced the cancellation of the 40th annual contest. The three-night competition typically draws about 150 stocky, bearded entrants, with their supporters and hundreds of spectators, and organizers were concerned about staging it amid packed crowds.

“Coming back to Sloppy Joe’s is a wonderful thing,” said Charlie Boice, who won the  2015 contest and returns each year as a judge. “For most people, it’s just a destination on a cruise or a destination on vacation. But for the ‘Papas,’ this is home.

“The staff isn’t staff; they’re our friends — they’re our family,” added Charlie, who traveled to Key West from his home in Jupiter, Florida, to be part of the reopening celebration. “To come here and be here for opening day is just such a thrill. We need some good news nowadays, and this is some great news.”

(And for those who want more good news, the next Hemingway Look-Alike Contest is scheduled July 22-24, 2021. Don’t miss it!)